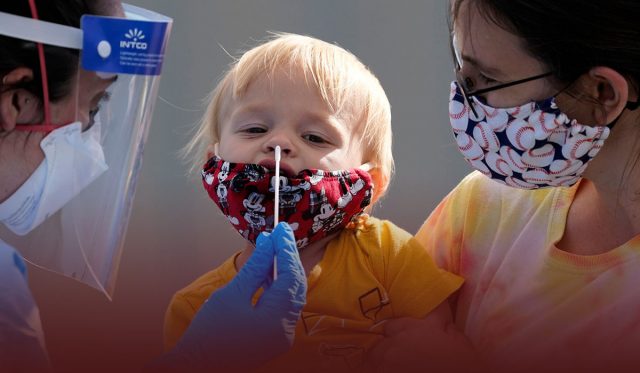 Last week in the United States, over two hundred and fifty thousand children tested positive for coronavirus, according to the latest report published Tuesday from the American Academy of Pediatrics. The report shows that the new cases are continuing to rise after the start of the school year. Moreover, the report counted 251781 new cases of the COVID-19 among kids between 26th August and 2nd September based on the statistics of the forty-nine states.

Children now represent more than 1 in 4 — or 26.8% — of the weekly Covid-19 cases reported nationwide, according to new data released Tuesday from the American Academy of Pediatrics.

It marks a twenty-five percent increase from the week before it, which was already high exponentially from the approximately fifty thousand cases matched during the last week of July. Kids now make up over a quarter of all new virus cases in the United States, with some states such as, Tennessee, reporting infections that are even higher. The American Academy of Pediatrics emphasized that children made up around fifteen percent of new cases for most of the outbreak, a figure that started to rise in late July.

How many children tested positive between 5th Aug and 2nd Sep?

According to the AAP, between 5th August and 2nd September about seven hundred and fifty thousand kids tested positive for coronavirus. Since the start of the school year in late July, a mounting number of kids had been testing positive for the infection. Increasing cases led to the closures of at least one thousand schools across thirty-one different states, according to the published statistics of The Wall Street Journal.

Likewise, the number of new hospitalizations in children with coronavirus continued to reach new peaks of the outbreak and overwhelmed pediatric hospitals in COVID-19 hotspots. Approximately twenty-four hundred children hospitalized with suspected or confirmed virus infection as of Tuesday, according to the figures from the Department of Health and Human Services.

The increase in the hospitalization number amid coronavirus contributed to the extraordinary strain on the health care safety net of the United States children. Mark Wietecha, the President of Children’s Hospital Association sent a letter last month to U.S. President Joe Biden and warned that there may not be enough expert staff or bed capacity to accommodate children and families in need.

Last month, the American Academy of Pediatrics urged the Food & Drug Administration to immediately approve an effective and safe coronavirus vaccine for children under the age of twelve, noting an increase of cases because of the delta variant that changed the risk-benefit analysis of inoculation for kids. Furthermore, the higher proportion of new infections in this population means this age group might contributing to a continuous increase in the spread of coronavirus.

Unfortunately, more than three hundred and fifty kids have died of coronavirus since the start of the outbreak, and millions of children were negatively impacted by social isolation, missed schooling, and in many cases, the death of parents and other caretakers. Despite the surge in pediatric coronavirus cases, experts and regulators so far recommended approval of a children’s coronavirus vaccine is likely still some months away.