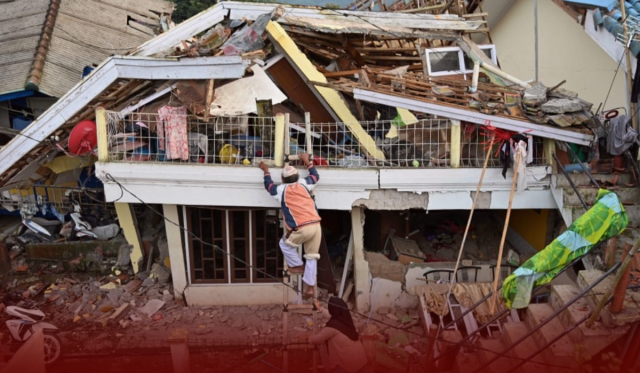 According to local officials, an earthquake of 5.6 magnitude struck Indonesia’s West Java province on Monday at 1:21 pm local time, killing more than 160 individuals. In a statement late Monday, officials in Cianjur regency, near the quake’s epicenter, reported 162 deaths and hundreds of injuries. The earthquake is believed to have been the deadliest in Indonesia this year, with a history of earthquakes.

An earthquake has struck Indonesia, killing 162 people & injuring hundreds more, with rescuers looking for survivors trapped under the rubble. The head of the Indonesian National Disaster Mitigation Agency has stated that dozens of buildings were damaged.#EarthquakeinIndonesia pic.twitter.com/4wiABS2u7T

An official of the Indonesian police told the Antara news agency on Tuesday that hundreds of officers were taking part in the rescue efforts in Cianjur, the closest town to the earthquake’s epicenter. A population of 175,000 lives in this mountainous region of West Java, the province with the greatest density of human population in Indonesia. “Our main focus today is to evacuate the victims,” Prasetyo stated.

It is estimated that the earthquake damaged and demolished dozens of buildings in the country, as stated by the head of the country’s National Disaster Mitigation Agency. According to Governor Ridwan Kamil, approximately 13,000 people were evacuated to evacuation centers after their homes were severely damaged in West Java. However, Kamil added that the death toll has likely increased due to the collapse of so many structures. In addition, there were at least 326 injuries, he said.

Al Jazeera‘s Jessica Washington reported from the Rumah Sakit Sayang hospital that medical workers were forced to treat patients in the building’s car park due to extensive damage caused by Monday’s earthquake. “Our arrival in the early hours of the morning has been accompanied by the persistent sounds of ambulances as health workers attempt to reach those in need,” she said. Among the victims in this hospital are many children who have suffered head injuries. Many children also have fractures, and officials state that dozens of children have died in this facility.”

Earlier on Tuesday, Save the Children Indonesia announced that it would dispatch a team to Cianjur to assess the damage and the needs of children and adults affected by the disaster. Additionally, the organization prepares and distributes school tents and back-to-school recreational and family hygiene kits. SMP Junior High School 5 West Java school, with which Save the Children works, was forced to evacuate due to a power outage during class, according to teacher Mia Saharosa.

The incident occurred during a learning process, shocking to all of us. Children, who were afraid of their families at home, gathered in the field where they wept and trembled. A statement by the nongovernmental organization quoted her as saying, “We hug one another, we support eachother, and we continue to pray.” Over 2200 homes were damaged by the earthquake, which was felt strongly in Jakarta, some 75 kilometers (45 miles) away.

Many areas have experienced power outages, complicating rescue efforts, and more than 80 aftershocks have been recorded. In addition, Indonesia has been subject to numerous earthquakes and volcanic eruptions because it is located within a zone of active seismic activity within the Ring of Fire.

Most Recent Earthquake History in Indonesia

Located in a seismic zone, Indonesia is frequently subject to earthquakes. When tsunamis follow these earthquakes, significant casualties can occur. For example, more than 4,000 people were killed by a devastating earthquake that struck near Palu in Sulawesi in September 2018. In 2009, southern Sumatra was struck by an earthquake that resulted in the death of 1,117 people.

The earthquake caused a tsunami, liquefaction, and landslides, devastating the city. Likewise, over 226,000 people were killed by the 2004 tsunami that swept ashore in fourteen countries around the Indian Ocean, most of them in Indonesia, after a 9.1 magnitude earthquake off Sumatra Island in western Indonesia triggered a giant earthquake.

During the monsoon season, when heavy rains hit it, Indonesia often experiences extreme weather events and natural disasters, including flooding and mudslides. “Continue to remain vigilant,” West Java province governor Ridwan Kamil told local media. He added that the government remains prepared to respond to aftershocks. “At this time of year, we are experiencing disaster season, which is frightening,” he mentioned.

Rescuers are looking through debris to find survivors. At approximately 1:21 pm local time on Monday, a 5.6-magnitude earthquake struck the Cianjur region in West Java at a depth of ten kilometers, causing buildings to crumble and schools to close. In a statement issued Tuesday, the National Disaster Management Agency (BNPB) announced that the death toll might rise as several people were crushed under collapsed buildings.

After the earthquake, 25 aftershocks were recorded within the first two hours following the event, according to Indonesia’s bureau of meteorology, the BMKG. In addition, he noted that some of those trapped were not immediately rescued and that the situation remained chaotic. The government builds shelters and tents to assist victims who need necessities.

Several communications efforts were disrupted due to the power outage, according to Herman Suherman, head of Cianjur’s government. He added that landslides had blocked access to the area of Cugenang, making it difficult for people to evacuate. In footage from the news channel Metro TV, hundreds of people appeared to be treated in a hospital parking lot, while several buildings were almost destroyed as frightened citizens gathered outside.