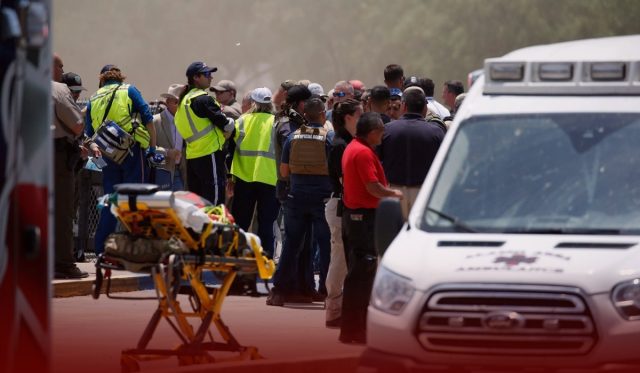 Officials said an eighteen-year-old gunman opened fire Tuesday morning at a Texas elementary school, shooting at least nineteen children as he walked from classroom to classroom. It is the deadliest school shooting in nearly a decade and the latest gruesome moment in a country racked by mass shootings. A Texan police officer shot and killed the shooter.

According to Texas officials, nineteen children and two adults were killed in a mass shooting at a Texas Elementary School. With emotion in his voice, the U.S. President spoke to his people and said he was sick and tired, adding that it was time to turn this pain to action. pic.twitter.com/QfQgEo91nT

Authorities also confirmed the death of two adults. Governor of Texas Greg Abbott said one of the two was a teacher. Since the brutal shooting at Sandy Hook Elementary in Newtown, Connecticut, in December 2012, which killed 20 children and six adults, the attack at Robb Elementary School in heavily Latino Uvalde is the deadliest shooting at an American school.

According to Texas Senator Roland Gutierrez, who states police briefed, three people were injured in the incident and are hospitalized in a severe condition. Gutierrez has said that the suspect killed his grandmother before going to school. Sources who spoke on condition of anonymity because they were not authorized to divulge the details of the investigation said the death toll is expected to rise.

Law enforcement officials speaking on condition of anonymity said the Border Patrol agent who was nearby when the shooting started rushed the school and shot the suspect as he stood behind a barricade, not waiting for backup. Furthermore, the law enforcement source said that the shooter wounded the agent, but he could walk out of the school. Officials started an investigation into the deadly shooting.

It came just ten days after a deadly, racist attack on a Buffalo, New York, supermarket. It added to an increasingly disturbing trend of mass killings at schools, churches, and stores. So, it appears there will be no gun regulation reform in the wake of Sandy Hook, at least not in the near future. However, President Biden seemed ready to fight against the mass shooting and called for new gun regulations during his televised address to the nation some hours after the attack.