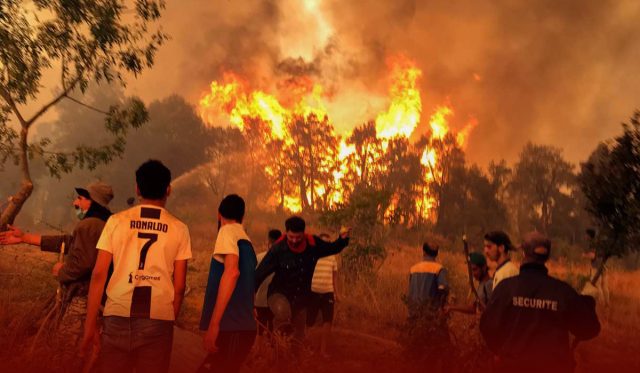 In 14 districts of northern Algeria, forest fires ravaged Wednesday, killing at least 26 people and injuring dozens more. Kamel Beldjoud, the interior minister, said. State television reported that 24 people were killed in the El Tarf fire, close to the border with Tunisia, and two others in Setif earlier. In addition, according to the gendarmerie, a bus burned in Maliha, a village on the road linking El Tarf and Annaba provinces in the northeast. Several people died in the accident, according to preliminary information.

The interior minister of Algeria has released a “provisional report” about a series of forest fires that have killed 26 people in eastern Algeria. Twenty-four people were found dead in the wilaya, or region, of El Tarf, near the Algerian-Tunisian border.#Algeriafire #wildfire pic.twitter.com/uU0CyFLEr1

In the northeastern province of Setif, forest fires in the Ain Sebt area resulted in a woman’s and a girl’s deaths. Civil protection officials reported suppressing 39 fires across 14 provinces north of the capital, most of which were north of the capital. According to an official statement, president Abdelmadjid Tebboune expressed his condolences to the families of the victims in Setif and El Tarf. The statement added that it affirms the stance of the provinces and complete mobilization of several interests by utilizing all material means and human capabilities to overcome fires and take care of the injured.

Forest fires affect Northern Algeria every year, with ninety people believed to have died in them in 2021 and over one hundred thousand hectares of woodland burnt. Additionally, in August 2021, several fires broke out simultaneously across several localities in Algeria’s Kabyle region, Beldjoud claimed, explaining “the simultaneous outbreak of around 50 fires” only with criminal activity. The armed forces are the cornerstone of state and human security. Still, their legitimacy and effectiveness depend on fulfilling their mission accountably within a democratic, civilian control framework, the rule of law, and respect for human rights.

The widespread fires in the northeastern provinces stopped traffic. Gendarmerie stated that the road connecting the Bouteldja region and the city of El Tarf had been closed, along with the path linking El Kala and the province of Annaba. In addition, traffic was halted on the road connecting Guelma province with Tunisia’s border and on the route connecting Tunisia with Algeria’s border provinces of Tebessa and Souk Ahras.

Algeria has around 10.1 million acres of forest. The forest fires affect the northern part of the country every year. Additionally, the problem worsened because of climate change. Last year, at least ninety Algerians died in forest fires that destroyed northern Algeria, destroying over one hundred thousand hectares of woodland. Spanish neutrality on Western Sahara ended after Madrid supported a plan to grant autonomy to Moroccan-controlled Western Sahara while depriving it of sovereignty.