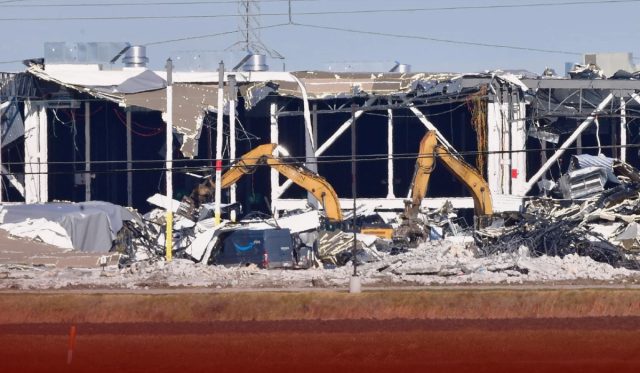 Amazon is facing massive criticism over safety and health policies at a warehouse in the American state of Illinois after six workers died when the tornado destroyed the building. However, the company said that its team had worked rapidly in response to the tornado. The tornado hit the Amazon warehouse on Friday, resulting in the roof collapse.

A spokesman of Amazon, Kelly Nantel, stated that the tornado company’s deaths deeply saddened the company. Moreover, the federal Occupational Health & Safety Administration (OSHA) said it initiated a workplace safety inquiry into the warehouse downfall. But activists and workers are calling for more action. Concerns over labor rights at Amazon have been rising, intensified by allegations the e-commerce giant failed to notify employees and health officials of Coronavirus cases effectively.

An organizer at Warehouse Workers for Justice, Marcos Ceniceros, said that the incident calls into concern so much of the practices of Amazon in their warehouse. In addition, the Warehouse Workers for Justice requested a hearing in the Illinois state legislature examining what led to the deaths of workers at the warehouse. Similarly, they also called on the e-commerce platform to ensure it has training and safety protocols in place for extreme weather disasters and other risks, such as coronavirus, in the future.

Twelve Amazon workers described their concerns over workplace safety after the roof collapse of the warehouse amid the tornado. Furthermore, some expressed that they had never experienced a tornado or fire drill on duty, and many of them said they would be unsure of what to do in an emergency.

Associate professor of economics at Carnegie Mellon University’s Tepper School of Business, John Gasper, signaled that he didn’t know the in-depth details of what happened at Amazon. However, he said for firms such as Amazon that have high staff turnover, it is possibly difficult to conduct regular emergency training schedules, specifically during the busy holiday season when there are several seasonal workers.

He said that the cost of time to do the drills is also the time they are not moving the packages. So, Amazon has to think about these tradeoffs. According to Amazon, warehouse workers had little time to prepare when the NWS (National Weather Service) declared a tornado warning. So, the tornado arrived soon after, collapsing two sides of the warehouse and caving in its roof.

Amazon Pledged to Back Affected Workers and Their Families

Nantel said that the Amazon warehouse received tornado warnings between 08:06 pm and 08:16 pm on Friday. Afterward, site leaders directed employees to take shelter instantly. However, at 08:27 pm, a deadly tornado hit the building. Most of the forty-six workers in the warehouse known as a delivery station moved to a shelter on the north side, which ended up almost unharmed.

But a smaller group of people were present towards the harder hit south end. Amazon said that those are not separate safe rooms, but usually, areas away from windows are considered safer than other areas of the facility. Amazon vowed to back affected workers and their families, as well as it will donate $1 million to the Edwardsville Community Foundation. Moreover, the e-commerce platform refused to answer questions about its disaster places at the warehouse, including weather workers required to perform drills.

Nantel underscored that the 1.1 million sq ft building of the warehouse was constructed consistent with code. However, Pritzker raised the concerns that present codes are not enough to meet the dangers of increasingly deadly storms and tornados. He demands an investigation into updating construction. The president of MWPVL International, Wulfratt, said it was basically a warehouse with nothing specifically distinct to Amazon.