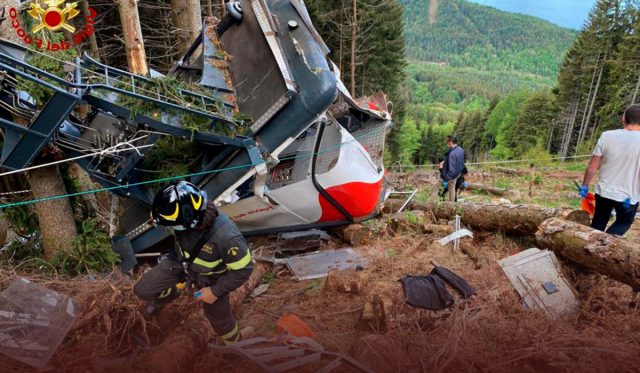 According to officials, around fourteen people were killed in a cable car accident in northern Italy. A spokesman for the National Alpine Speleological Rescue Corps stated that a cable broke Sunday morning when a group of people was riding in a Stresa-Mottarone cable car from the Lido di Stresa square on Lake Maggiore to the neighboring Mottarone mountain in the Piedmont region.

Helicopters dropped alpine rescuers to the crash area and lifted out the wounded and dead bodies through them. Authorities said that fifteen passengers, including two children, were riding in the car when the deadly crash happened. According to the rescue group, the National Alpine Speleological Rescue Corps tweet, one of the two children transported by helicopter to Turin hospital did not make it. The other child remains in a critical condition, and officials earlier said both children survived with injuries.

Italian Prime Minister Expressed his Condolences to Loved Ones of Deceased

A photographer at the crash site, posted by the national fire brigade of Italy, shows the first respondents surrounding the distorted cable car near broken trees and detached cables. A spokesman for the fire brigade also said that the death toll could rise. Mario Draghi, the Prime Minister of Italy, expressed his sympathy and condolences to loved ones of the departed souls.

In a statement, the prime minister said that he learned with deep sorrow the news of the heart-breaking accident of the Stresa-Mottarone cable car. He also expressed his condolences on behalf of his whole government to the families of the victims, with a special sympathy for the children who were seriously injured. Draghi is receiving continuous updates on the situation from the local authorities and Enrico Giovannini – the Minister of Sustainable Infrastructure & Mobility.

David Sassoli, the President of the European Parliament, tweeted in Italian, “In this moment of pain, I cling to the families and friends of the victims of the tragic accident of the Stresa-Mottarone cable car. Moreover, my thoughts are that of @ Europarl_IT and with you.”

Charles Michel, the European Council President, also tweeted in the Italian language, “I offer my deepest condolences to all the families and friends who lost a loved one in the tragic cable car accident in Stresa near the #LagoMaggiore Europe is in mourning with you. I wish the survivors a speedy recovery.”