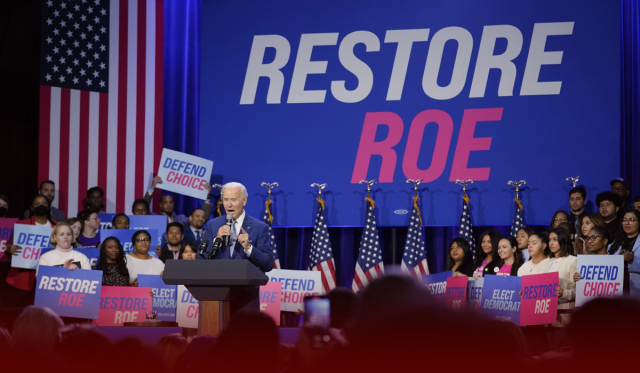 A month before the midterm elections, President Joe Biden pledged to submit the first bill he would introduce to Congress next year to enact an abortion protection law. As he intended to mobilize his party’s voters three weeks before the midterm elections, he vowed to send a bill to write abortion protections into law. Biden encouraged people to remember how they felt during the Supreme Court’s overturn of Roe v. Wade decision in late June, the landmark 1973 abortion ruling.

President Joe Biden, who sought to energize his party’s voters three weeks ahead of the November midterms, promised Tuesday that the first bill he sends to Capitol Hill next year would include abortion protections.#Biden #midterms #midterms2022 #AbortionLaw #AbortionLegislation pic.twitter.com/vKam3iX1WS

It is another example of how White House officials are attempting to keep abortion on Democrats’ minds. “When 50 years of constitutional precedent were overturned, I want us all to remember how angry, worried, and disbelieving we all felt in the wake of this decision,” Biden said in remarks at the Howard Theater, “the anger, the worry, and the disbelief.” Throughout his speech, he lambasted Republicans across the country for restricting that process, often without exception.

The president urged Democrats in attendance that if they value the right to choose, then they must vote.” Throughout the year, Biden has emphasized the need for Congress to restore abortion access to the level it was before Dobbs v. Jackson, which reversed Roe. However, he also admitted, “we are short of a few votes” now for the federal government to reinstate abortion protections and urged the voters to elect more Democrats to the House and Senate.

Will Biden Fulfil his Pledge?

Considering the current political climate, Biden is doubtful to be able to follow through on his pledge unless Democrats remain in charge of the House and gain seats in the Senate. Most voters are concerned about the economy and inflation, although abortion rights have been a crucial motivating factor for Democrats this year. For the Democrats, eliminating the filibuster – the legislation that requires sixty votes to advance most bills – will also present a significant challenge amid opposition within their own ranks.

Biden has consistently opposed any changes to Senate institutional rules, but in the days following the June overruling of Roe, he made clear that he supported eliminating the supermajority requirement for abortion legislation, just as he had done with voting rights lawmaking. Two moderate Democrats hold a different perspective on the filibuster – Senators Joe Manchin of West Virginia and Kyrsten Sinema of Arizona – are in favor of the filibuster. The senator has stated that she favors retaining the filibuster, so any abortion restrictions backed by the GOP leaders in the Senate would face an exceptionally high hurdle to get through.

Several Democrats running for Senate in Pennsylvania and Wisconsin – the two most likely to flip Republican-held seats – have expressed support for eliminating the filibuster. In addition, Senator John Fetterman actively supported the 51st vote during his campaign for the Senate in favor of legislation such as legalizing abortions, codifying same-sex marriages, and simplifying unionization for workers, all of which would otherwise be blocked by filibusters.

Several Democrats running for Senate in Pennsylvania and Wisconsin – the two most likely to flip Republican-held seats – have expressed support for eliminating the filibuster. Senator John Fetterman actively supported the 51st vote during his campaign for the Senate in favor of legislation such as legalizing abortions, codifying same-sex marriages, and simplifying unionization for workers, all of which would otherwise be blocked by filibusters.

This election cycle, as Democratic leaders seek to charge voters in a difficult midterm election season for the party in power in Washington, abortion has been a constant topic of Biden’s political rhetoric – and proposals from Republicans to impose nationwide restrictions on the procedure. A Republican-controlled Congress may impose abortion restrictions on Biden, but he has pledged to reject them in fundraisers and political speeches.

Aside from calling on voters to strengthen the Democratic ranks in the Senate, Biden urged voters to vote for Democrats, so enough senators would support the reintroduction of abortion nationwide and change Senate rules to achieve it. But unfortunately, there has also been some attempt to capitalize on the issue by those opposed to abortion rights. Marjorie Dannenfelser, president of Susan B.

On Tuesday, Anthony, Pro-Life America, stated that next month’s midterm elections could not have stakes “that could not be higher.” Despite the abortion industry spending a record sum to elect the Democrats to Congress, Dannenfelser argues that doubling down on a radical abortion agenda up to birth will not stop Democrats from losing Congress. The Democratic Party is on the wrong side and utterly disengaged.

Biden to Forgive Billions of Dollars in Student Loan

Biden strongly appealed to young voters at the midterm elections on Tuesday. Young voters historically participate at lower rates than other age groups. Although Biden mainly discussed abortion, he also addressed the forgiveness of billions of dollars in student loans and the pardoning of marijuana possession cases. These two topics were highly popular with younger voters.

“Essentially, you represent the best of us all. “Your generation won’t be ignored, will not be silent, and will not be shunned,” Biden said. He added, “you voted in 2020 to bring about the changes you desired. For our nation and your generation’s future, we must exercise our voting power again in 2022.” Throughout the country, abortion laws have been altered because of court decisions and state legislation.

In twelve states, abortion is currently prohibited at all stages of pregnancy. Wisconsin has banned abortion clinics from providing abortion services, though it is unclear whether a ban is in place. There is a ban on abortion in Georgia when cardiac activity is detected, usually around six weeks of pregnancy and often before the mother is aware she is pregnant.