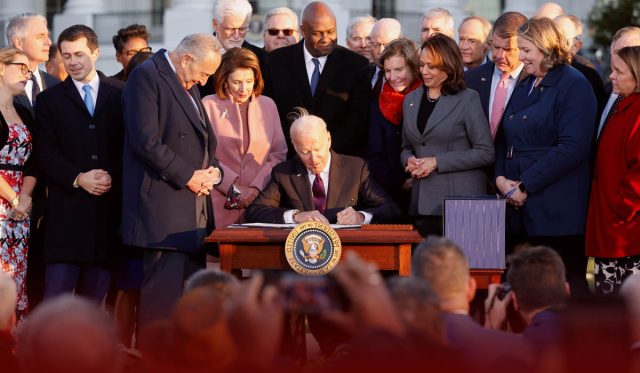 On Monday, the President of the United States signed a $1.2 trillion bipartisan infrastructure bill into law and marked the critical legislative victory with lawmakers from the Republican and Democratic parties at a White House event. The infrastructure bill includes upgrading the bridges, roads, broadband internet, and water systems of the country. The approval of the measure touts as evidence for his persistence that bipartisanship can also work in a severely polarized time.

At the time of signing the bill, President Biden said that Americans heard several speeches, pledges, and white papers from experts – but today, his government is finally getting this done. The bill is proof that despite the cynics, Republicans and Democrats can come together on the agenda and deliver encouraging results. Further, he added that they are taking a monumental step forward to build back better as a nation. However, predictions are more challenging for more bipartisan ahead of next year’s midterm elections as Biden pivots back to more tough talks over his wide-ranging $1.85 trillion social spending bill.

Today, we finally got it done.

America is moving again. And fifty years from now, I truly believe they will say this was the moment we won the competition for the 21st century. pic.twitter.com/PFQqemLbTe

Biden Government Hopes to Sell the New Law as a Success

Biden hopes to use the infrastructure law to revive his popularity, which hit badly amid rising inflation and the inability to shake economic risks and public health from coronavirus thoroughly. He also gave a message to the Americans by saying the U.S. is moving again, and their lives are going to change for the better. With the bipartisan pact, Biden had to select between his vows of encouraging national unity and pledge to transformative change. The final move cut down much of his primary vision for infrastructure.

Furthermore, the Democratic administration hopes to sell the recent law as a success that connected partisan divides and will lift the nation with high-speed internet, clean drinking water, and a move away from fossil fuels. However, dissatisfaction over the coronavirus pandemic and resulting economic issues – including record inflation – contributed to lagging the popularity of Biden. The latest ABC News-Washington Post poll out over the weekend put the Biden’s approval ratting at forty-one percent approve, fifty-three percent disapprove.

The president praised and thanked many senators who were key to the approval of the bill, including Democratic Senators Kyrsten Sinema of Arizona and Senator Rob Portman of Ohio, who both spoke at the event. Moreover, Biden called Portman a hell of a good guy and kidded that his praise of the Republican leaders wouldn’t hurt Portman since he is not running for reelection in the next year. Notably, the president also praised Senate Minority Leader Mitch McConnell, who didn’t attend the bill signing ceremony, for voting on the infrastructure bill and speaking about its importance and value.

In addition, Biden expressed gratitude towards many other top Democratic leaders in the House, including House Speaker Nancy Pelosi, and recognized many committee chairs, governors, and ranking members. Likewise, he thanked organized labor, who realizes the bill is about jobs. The package will deliver $550 billion of additional federal investments in the infrastructure of America over five years, including funds for mass transit, bridges, roads, airports, rail, waterways, and ports.

The bill also includes a $65 billion investment in improving the broadband infrastructure of the country and funds tens of billions of dollars in improving the water systems and electric grid. In addition, according to the bill text, $7.5 billion would go to developing a countrywide network of plug-in electric vehicle charging systems. The president said that the recent infrastructure law is a blue-collar blueprint to rebuild America.

The recent legislation is the initial part of the president’s two-part economic agenda. So, the bipartisan infrastructure bill focuses on hard infrastructures such as bridges and roads, and the Democratic party will now turn to the more extensive package that focuses on what the President sounds human infrastructure, which includes investments to expand access to health care, family care, and to address the climate change. However, the second part of legislation still faces an indeterminate fate in Congress amid conflicts between moderates and progressives.

Senate initially approved the bipartisan infrastructure bill in a sixty-nine to thirty vote in August, and afterward, the House, including thirteen Republican lawmakers, voted to pass it on 5th November. Additionally, a group of former House Republican representatives issued a statement Monday in support of the infrastructure bill and intended at House Republican leaders for their science as members from their own meeting have come under criticism – and faced death threats – for supporting the bill in the Senate and House.

The former lawmakers wrote that by remaining quiet and unable to defend these thirteen members publicly, House Republicans are signifying their fear of extreme elements within their own meeting at the cost of a few of their most politically vulnerable leaders who are essential to claim a House majority. In addition, the infrastructure bill signing ceremony marked a rare bipartisan gathering, with local and state officials attending from both sides of the corridor.

Trump Criticized the Republicans who Supported the Bill

Donald Trump, the former president of the United States GOP leaders who voted for the Biden’s infrastructure bill – nine senators and thirteen House members – should be ashamed of themselves for assisting the Biden administration. Many House Republicans who supported the bill face threats and criticism across the country. Last week, Representative Fred Upton released the audio call recording containing expletive material in which an individual in South Carolina called him a traitor and said he hopes the representative, his entire family, and his staff members die.

Other GOP lawmakers such as Representative Madison Cawthorn and Representative Marjorie Taylor Greene joined in the criticism and condemned their Republican colleagues who voted for the infrastructure bill. After the successful vote, Greene, a House freshman, tweeted the names along with the phone numbers of the Thirteen Republican lawmakers who voted in favor of the Biden bill, which she described as Biden’s Communist seizure of America.

Within moments of signing the bill, Democrats and Republicans issued press releases to share details about the projects that will be built in their home districts and states. Collins said the infrastructure bill would provide $225 million funds to Maine – the northernmost state in New England – for bridge construction, repair, and maintenance. On Monday, Jen Psaki, the White House Press Secretary, told reporters that the president invited everyone who supported the bill because he felt this was the right thing to do. She added that whether people join the signing ceremony, that’s their choice.