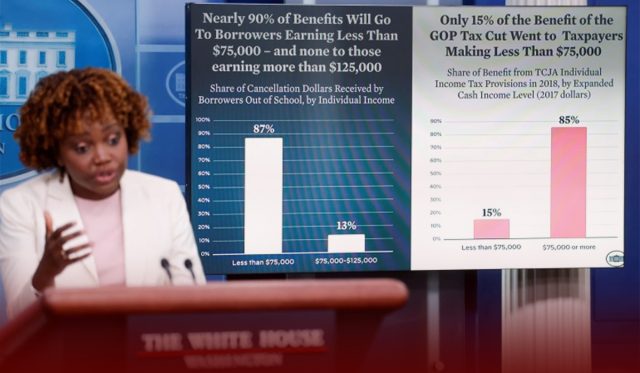 On Thursday, the White House caused controversy on Twitter by calling out many GOP representatives who criticized the United States president’s move to cancel over $20000 in student loan debt for college graduates, indicating that some of the critics’ businesses had over $1 million in federal loans forgiven as part of the COVID-19 pandemic-era Paycheck Protection Program.

Some conservative Democrats and GOP lawmakers criticized the move as an unfair boost for a relatively small part of society. President Joe Biden and his allies mounted a defense of student debt relief, emphasizing that the plan accomplishes a presidential campaign promise and will facilitate middle- and working-class Americans. Biden has come under a flood of criticism from GOP lawmakers for his move to cancel $10,000 in federal student loan debt making below $125000 one year, with $20000 in debt relief for those borrowers under the income level who received Pell Grants.

Furthermore, White House officials declared that the president would benefit from delivering their election campaign promise. Still, they were pushing to steer the politics heading into the upcoming midterm elections in November. As present and ex-students all over the U.S. started to digest what the plan might mean for them – some are slamming it as unfair and others welcoming the relief – lawmakers across the scale struggled with the possible impact of a decision that had been intensely discussed within the White House.

On Twitter, President Biden wrote that he would never apologize for helping the middle class of his country, especially to those Americans who voted for a $2 trillion tax relief for the wealthy and giant firms that racked up the deficit. Likewise, Biden wrote for those GOP lawmakers who criticized his move to forgive the student loan. Earlier, in another tweet, the president said that America’s middle class and working families need more breathing room. That is why approximately ninety percent of the relief provided through his government’s action on student loan debt will go to folks making below $75000 per year.

To those Republicans in Congress who believe student debt shouldn’t be forgiven:

I will never apologize for helping America’s middle class – especially not to the same folks who voted for a $2 trillion tax cut for the wealthy and giant corporations that racked up the deficit.

On Wednesday, Biden announced that his government would forgive $10000 in student debt for graduates making below $125000 annually. Likewise, those Americans who received Federal Pell Grants for lower-income Americans would get $20000 in loan relief. GOP lawmakers were almost condemning the move; some Democratic lawmakers joined them. Tim Ryan, an Ohio Democrat, running for the United States Senate, slammed the debt relief as too broad. Biden tweeted that Student debt forgiveness must go to those who need it. He added that his administration ensures that no high-income American or household in the top five percent will benefit from debt relaxation.