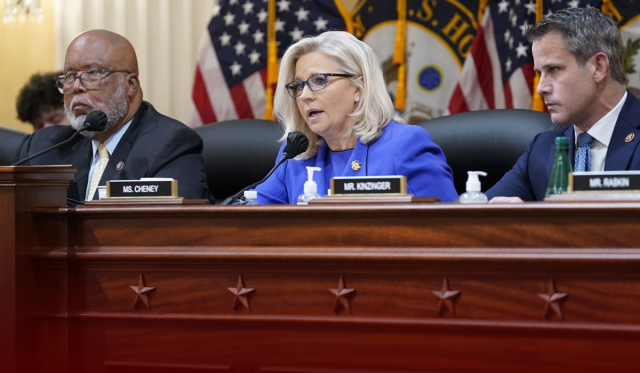 In its report on the January 6 insurrection at the U.S. Capitol, the House panel placed the blame firmly on Donald Trump Thursday. The panel said the insurrection was no accident but the result of Trump’s effort to overturn the 2020 Presidential Election results.

The House panel probing the Jan 6 riot at the US Capitol laid the blame on former President Trump and said that the assault was barely unplanned but an attempted takeover and a direct result of Trump’s effort to overturn the results of the Presidential Election 2020. pic.twitter.com/7GtyEBSzqU

In their report, the 1/6 committee presented a twelve-minute video depicting extremist groups leading the deadly blockade and startling testimony from Trump’s closest associates, in which they argued that Trump’s repeated lies about election fraud and his desire to prevent Democratic Joe Biden’s victory culminated in the attack and jeopardized the U.S. democracy.

During the certification of Joe Biden’s election victory on January 6, 2021, Trump supporters stormed Congress. Then, on Thursday evening, in the wake of almost a year of investigation, a House select committee led by Democrats showed clips from interviews it conducted with members of the inner circle of the former president.

American views on the Capitol attack may not change due to the hearings, but the panel’s investigation will stand as a public record. Its final report released ahead of this fall’s midterm elections and as the former president considers another run for the presidency, aims to explain why the Capitol was attacked so brutally in 1814 and prevent such occurrences in the future.

During Thursday’s congressional testimony, Donald Trump professed desperation for his false claims of election fraud, encouraging supporters to go to Capitol on January 6 when Congress would certify the results, despite those around him insisting Democratic Biden had won the election. During the riot, pro-Trump rioters used pipes, bats, bear spray, and other weapons to attack the Capitol and wound at least 100 police officers. Likewise, a woman shot by the police and killed during the rioting was among the nine who died.

Democrats face political headwinds in the fifth month before the midterm elections, so the Republican opposition has dismissed the probe as a ploy. The nation will vote in November, and polls suggest that Democrats may lose control of the House and possibly even the Senate. The House voted to impeach Mr. Trump following the riot a week after taking office. Additionally, the Senate acquitted him after accusing him of inciting insurrection.