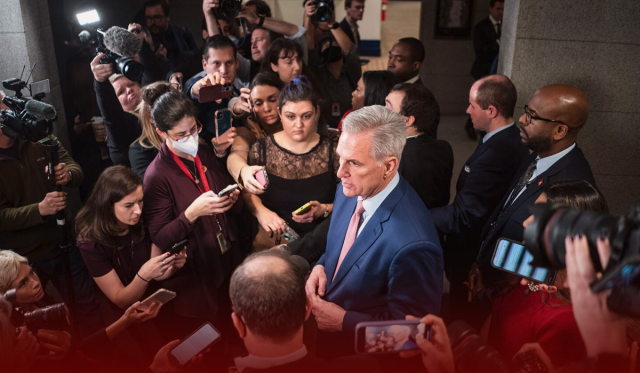 On Tuesday, the United States House of Representatives witnessed a century’s worth of political drama as GOP leader Kevin McCarthy repeatedly failed to secure the votes needed to become Speaker of the U.S. House. As a result, the House adjourned without a speaker, which has not happened since 1923. This turn of events has left many lawmakers scrambling to find a suitable replacement candidate for the leadership role, causing chaos and uncertainty within the chamber.

House Republican Leader Kevin McCarthy was unable to secure the 218 votes needed to become the next House speaker on Tuesday. This is the first time in nearly a century that the majority’s nominee has needed another vote. McCarthy’s bid was thwarted by 19 Republican defections. pic.twitter.com/RsCOElvXrq

The Republican Party anticipated a successful start to the new Congress with their control of the House, but McCarthy’s bid for Speaker was hindered by dissent within the party. He has lost three consecutive votes thus far, and it is still being determined how he will fare when the House reconvenes on Wednesday to vote again. The voting will continue until a majority winner is declared. If McCarthy can overcome the current obstacles and become Speaker, analysts predict that the infighting among moderate and right-wing GOPs in the House will result in a tumultuous two years.

Negotiations Made Him Look Weak

In his bid to become Speaker, McCarthy only had a few votes to spare due to the narrow Republican victory in the House in November. This left room for a group of hardline conservatives to unite in opposition to his nomination. According to Republican observers, this division has been a long time in the making. One Republican lobbyist, who requested anonymity, stated that McCarthy has not endeared himself to certain segments of the caucus and has made many enemies.

Some dislike him for political and personal reasons. McCarthy engaged in negotiations and made concessions to gain the votes of those who saw him as too moderate and power-hungry. One such concession was agreeing to change the House rules to facilitate the removal of a sitting Speaker, which effectively gave his opponents a significant check on his power. A Republican lobbyist stated that the fact that McCarthy was negotiating with the Republicans made him appear weak and desperate.

The ineffectiveness of McCarthy’s efforts was made clear on Tuesday as he failed to secure the necessary 218 votes in three consecutive votes. Despite the Republican Party holding 222 seats, a group of 19 hard-right Republicans had coalesced in opposition to McCarthy for ideological and personal reasons and the opportunity to exploit their narrow majority to extract further concessions from him. Representative Rob Good of Virginia stated that this group would “never back down.”

One of the day’s most intense moments came when Representative Jim Jordan was nominated to oppose Kevin McCarthy for the role of Speaker of the House shortly after McCarthy had been nominated himself. Despite Jordan – a key figure in the conservative Freedom Caucus – calling on Republicans to “rally around” McCarthy in the third round of voting, 20 Republicans voted for Jordan, leading to McCarthy’s failure to win the position.
Representative Hakeem Jeffries of New York, the Democrats’ new leader, enjoyed his party’s support while some members couldn’t resist poking fun at the Republicans’ difficult afternoon. Representative Ruben Gallego of Arizona tweeted that Democrats were “breaking out the popcorn” and included a snack photo as evidence.

Washington’s political observers offer various theories on how the current situation may end. Their predictions for the BBC range from the feasible (McCarthy holds out and wins but is significantly weakened) to the entirely possible (he bows out and backs Representative Steve Scalise of Louisiana) to the far-fetched (five GOPs vote for Democratic Representative Hakeem Jeffries, giving him control of the House).

Political scientist Ruth Bloch Rubin of the University of Chicago, who studies partisanship, stated that McCarthy is currently “essentially hostage to one side of his party.” McCarthy has promised not to make any further concessions but may not have a choice. He may try to win over stubborn lawmakers with valuable committee assignments or leadership positions.

Aaron Cutler, a lobbyist who previously worked for ex-Congressman Eric Cantor, who was ousted by conservative opposition, said that McCarthy “has to give the people who are against him something to hang their hat on.” However, another Republican lobbyist believes there is “no path to victory at all, period.” The members will meet again on Wednesday, though it remains uncertain if the deadlock is resolved.

Read Also: Kevin McCarthy is Working to Solidify his Bid for Speaker