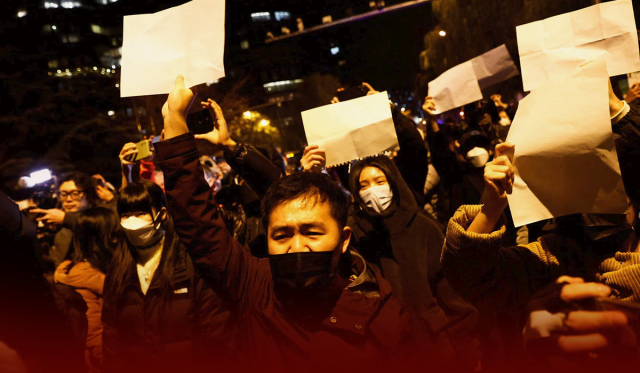 On Monday, China relaxed some pandemic regulations but reaffirmed its commitment to a “zero COVID” strategy amid a nationwide protest against the restrictions. Some have called for the resignation of President Xi Jinping in response to the restrictions. Even though the government appeared to be trying to pacify the demonstrators, it failed to address the demonstrations, which were the largest demonstrations against the Communist Party in decades.

China relaxed some pandemic regulations but reaffirmed its commitment to a “zero COVID” strategy amid a nationwide protest against the restrictions. Some have called for the resignation of President Xi Jinping in response to the restrictions.#BeijingUnrest #ChinaProtests #China pic.twitter.com/kwF7wBR5SZ

Hundreds of Chinese police officers were on duty in Beijing and Shanghai on Monday to prevent further protests against COVID-19 restrictions by the government. On Monday evening, a small vigil held by students at the Chinese University in Hong Kong showed solidarity with mainland protesters. During the weekend, protesters chanted “Lift the lockdown!” in a western Chinese city, while protesters in Shanghai, the nation’s financial center, held blank sheets of paper in silent protest.

Due to the normalization of the outbreak in Shanghai, city resident no longer fears the spread of the infection. It’s cold, so I eat and do whatever I want. What is the point of worrying? It’s cold, so that’s normal.” The chant of “Xi Jinping” was heard in Shanghai as well. Take a step back! CCP! Step down! One demonstrator shouted, “Let’s get this done!” about the Communist Party. Police detained and transported dozens of demonstrators in police vans and buses, although the exact number is unclear.

A graffiti at Peking University in Beijing read, “We do not want lockdowns or control. We do not want PCR testing; we want food.” Implementing strict lockdown measures in line with President Xi’s “zero COVID” policy has significantly reduced infections. However, they have disrupted the daily lives of the country’s 1.4 billion inhabitants. Across the country, several protests have been witnessed, which indicate that Chinese citizens are tired of the lengthy quarantines and testing requirements.

Upon learning of infections in apartment compounds in Beijing, the city government announced Monday that it would no longer erect gates to prevent people from entering. The article failed to mention a deadly fire that occurred last week in western Xinjiang. The fire sparked protests over whether locked doors and other anti-infection measures had prevented firefighters and victims from escaping. “All passageways must remain open for medical transportation, escape, and the China News Service quoted rescue,” a city epidemic control official said.

It was claimed that the fire was caused by “forces with ulterior motives” who were responsible for linking it to strict Coronavirus regulations. The government’s anti-COVID policies prevented firefighters from entering the building in Urumqi, where the deadly fire occurred last week. Furthermore, it was difficult to exit the building on the top floor due to the locked fire exit door. The Uyghur witness, who requested anonymity for fear of retaliation by the Chinese government, said they used the elevator to descend to the first floor.

According to recent announcements, Urumqi and other cities in Xinjiang will start operating public buses again this week. Markets and other businesses have also resumed operations in areas deemed less susceptible to infection. China’s “zero-COVID” policy isolates every infected individual to prevent transmission and lowers its case numbers compared to other countries. In the aftermath of this situation, millions of Chinese have been forced to confine themselves to their homes for up to four months.

The number of new cases recorded by China on Monday was 40,437, whereas the number registered by the United States on Sunday was 41,997. Moreover, the ruling party newspaper, People’s Daily, despite the protests and relaxation of some rules, called on the government to carry out its anti-coronavirus strategy effectively. It indicates that Xi’s government is not inclined to change its policies. “It has been proven beyond doubt that each version of the prevention and control plan has stood up to the test of time,” a commentator in the People’s Daily wrote.

The Reaction of the US Government to the Chinese Lockdown

Furthermore, the White House said that the Biden administration supports peaceful demonstrations. The president remains firm in his belief in the power of democracy and democratic institutions, regardless of whether it is demonstrators in Iran, China, or anywhere else around the world,” National Security Council spokesman John Kirby stated. Biden administration officials are closely monitoring the situation in China, he said.

Throughout the past year, the United States Mission in China has continued to discuss COVID-19 restrictions with the Chinese government and their impact on Americans living in or visiting the country. In the US, officials advise citizens to store two weeks’ supplies of bottled water, medications, and food for themselves and their families.

In a report published in The Global Times, it was reported that several cities were now aiming to take more targeted, scientifically based actions to curb flare-ups, based on advice from the COVID-19 response announcement earlier this month. “The authorities have conducted research and development to ensure that optimizing and adjusting the measures does not translate into relaxing prevention and control, reducing restrictions on Coronavirus, or resting on one’s laurels in combating the virus,” the newspaper stressed.

Urumqi’s delivery and transportation services resumed operations on Tuesday, and flights to other Chinese cities have also been reopened. In addition, a Tuesday’s Global Times report indicated that Guangzhou residents, home to approximately 19 million people, will not be required to take daily COVID-19 tests if they are already at home, such as elderly people or students enrolling in online courses.

The report stated that residents of southwest Chongqing who have not suffered a positive case in the last five days are not required to undergo mass testing. On Sunday, coronavirus lockdowns in the capital were not permitted to block access to firefighting equipment and community entrances. The Chinese ambassador to the UN, Zhang Jun, expressed in an interview with Al Jazeera that China would be unable to give up zero Coronavirus.

During a speech in New York City, he said, “There are countries that have chosen to move in a different direction, at the expense of their citizens.” Many people have died in those countries, and we do not want to see such a situation continue. Although you may claim that you would prefer greater freedom and liberty, you must still be prepared to die if you do so.