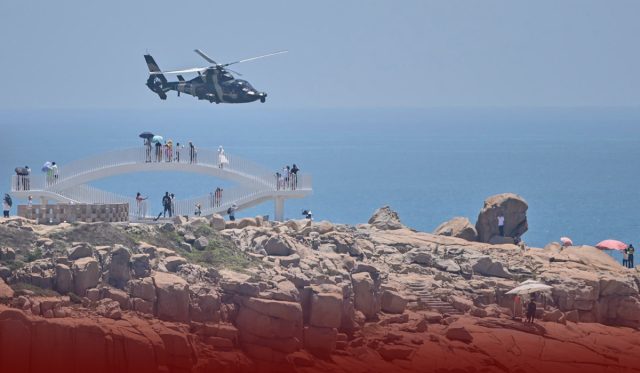 According to the Defense Ministry of Taiwan, China began its biggest-ever military drills on the seas across Taiwan following United States House Speaker Nancy Pelosi’s visit. Furthermore, state media reported that the live-fire maneuvers in six regions around Taiwan happened at 04:00 GMT local time and will continue until the same on 7th August. On Tuesday, Beijing started military exercises following Pelosi’s arrival.

Chinese military warplanes fly past Pingtan island, one of the closest points to Taiwan of the mainland, ahead of military exercises sparked by House Speaker Nancy Pelosi’s visit. The live fire exercises started at 12:00 local time in several areas.#taiwan #militarydrills #China pic.twitter.com/7gdEoKhj5U

China later announced a series of retaliatory economic measures in response to the visit of the U.S. House speaker. In addition, Taiwan said that the Chinese maneuvers violated United Nations (U.N.) rules, attacked its territorial space, and impeded its sea and air. China claims Taiwan as its own and hasn’t ruled out the use of force to capture the island.

Moreover, the U.S. follows a strategic ambiguity policy on Taiwan and is bound by law to provide the island with the means to protect itself. The Global Times framed the Beijing military exercises as rehearsals for reunification operations. It added that the Chinese military considered initiating live long-range artillery across the Taiwan Strait.

Chinese mainland military expert Zhang Xuefeng said that some of the six areas where China said the drills would be held fall within the territorial waters of Taiwan. Taiwan has already warned shipping airlines and firms to avoid the locations. In addition, the defense ministry of Taiwan said that unidentified aircraft, most likely drones, flew above the Kinmen Islands on Wednesday night, and it had shot flares in response.

On Wednesday night, Military’s Kinmen Defense Command’s Major General Chang Zone-sung told an international news agency that China’s drones came in a pair and flew into the Kinmen region twice at around 09:00 pm and 10:00 pm local time. Further, he added that they instantly fired flares to issue warnings and to drive them away. But, first, they penetrated the restricted area, and then Kinmen forces dispersed them.

G-7 (the Group of Seven) countries raised their concerns about the Chinese response to the U.S. speaker’s visit; they also called for calm and said that the Chinese moves risked unnecessary escalation. Furthermore, the foreign ministers of G-7 stated there is no justification to use Pelosi’s visit as an excuse for violent military activity in the Taiwan Strait. Moreover, it added that it is routine for representatives from the G-7 nations to travel internationally.

The escalatory response of the PRC risks destabilizing the region and increasing tensions. Likewise, the Association of Southeast Asian Nations Foreign Ministers also called for maximum restraint and expressed their concern that the mounting stress across Taiwan could result in miscalculation. During the last twenty-five years, Pelosi’s trip was the first by a sitting House Speaker, the 3rd most senior politician in the United States. On the other hand, China had warned of severe consequences if Pelosi went ahead with the Taiwan visit.

Difference Between Airspace and an Air Defense Identification Zone

Recently, Taiwan has usually been in the headlines when China’s military aircraft entered its air defense identification zone (ADIZ). Taiwan said Tuesday that twenty-one Chinese warplanes breached its ADIZ, and for the last month, there have been almost daily incursions of Chinese planes. However, these air defense identification zones are not the same as territorial airspace.

Instead, they are separately declared barrier regions that extend beyond territorial airspace and are expressly set up to give defensive armed forces time to respond when foreign warplanes approach. Therefore, not all nations have an ADIZ. However, the United States Federal Aviation Administration (FAA) defines zones as a specified region of airspace over water or land within which a nation requires an instant and favorable location, identification, and air traffic control of planes in the interest of the national security of the country.

In the 2020 review, Mercedes Trent of the Federation of American Scientists (FAS) wrote that it is traditional for foreign warplanes entering such zones to distinguish themselves and seek prior approval from the nation controlling the zone before entering. Moreover, if foreign planes enter an ADIZ without permission, the home jurisdiction will usually challenge warplanes to warn off the invaders. In recent years, it happened on various occasions when China’s fighter jets entered the ADIZ of Taiwan.