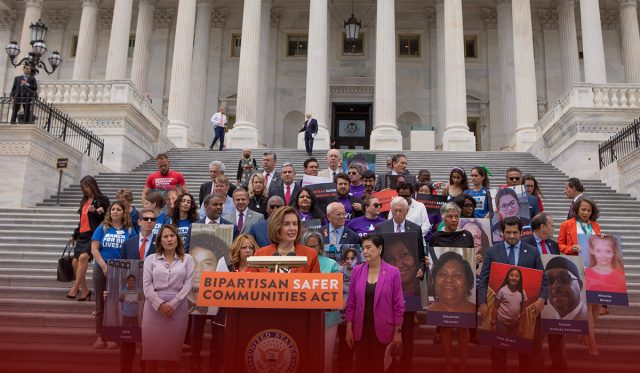 The United States Congress approved gun control legislation – the most significant firearms bill in approximately thirty years. It enforces stricter checks on teenage buyers and encourages states to take guns from individuals considered a threat. Moreover, the move enjoyed bipartisan support, with fourteen GOP leaders joining Democrats in the House to approve the bill with 234/193 votes.

The long waited law against increasing gun violence has been approved by the US Congress. It is said that in the past few decades, there has been no significant law relating to firearms before like this one.#gunviolence #congress #guncontrolbill #firearms #gunviolenceawareness pic.twitter.com/QXFfZ3sGwT

The gun control bill is now headed to President Joe Biden’s desk to be signed into law. On 23rd June, the Senate also passed the bill with the support of fifteen GOP senators. It ultimately passed in a late-night sixty-five-thirty-three vote. On Thursday, President Biden said after the Senate approval that after twenty-eight years of indecision, bipartisan Congress members worked together to pay attention to the call of families all over the country and enacted a bill to address the wave of gun violence in the U.S.

Reforms in the Gun Control Bill

The bill came into the discussion after last month’s mass shootings at a Buffalo supermarket in New York and a Uvalde school in Texas that left thirty-one people dead. The following are the reforms included in the gun control legislation:

Joe Biden stressed bigger reforms – including a prohibition on assault weapons (the weapons used in the Buffalo and Texas mass shootings) or an increase in the buying age. It is believed that the Texas shooting culprit purchased two semi-automatic rifles some days after turning eighteen.

The gun control bill is also important because it is the first time in the last thirty years that suggested reforms received this level of bipartisan support. Previously, the Republican party blocked efforts to bolster United States gun laws. However, in the Senate, all fifty Democrats, including Senators Kyrsten Sinema and Joe Manchin, the party’s most conservative members, voted in favor of the bill.

On the other hand, two-thirds of Senate GOP leaders opposed the bill, and all those who supported it – except for Todd Young from Indiana and Lisa Murkowski from Alaska – will not face voters in November 2022 or announced their plan not to seek re-election. In addition, Ted Cruz, the Texas Senator, condemned the bill as an effort to remove weapons from citizens rather than take serious moves to protect U.S. kids.