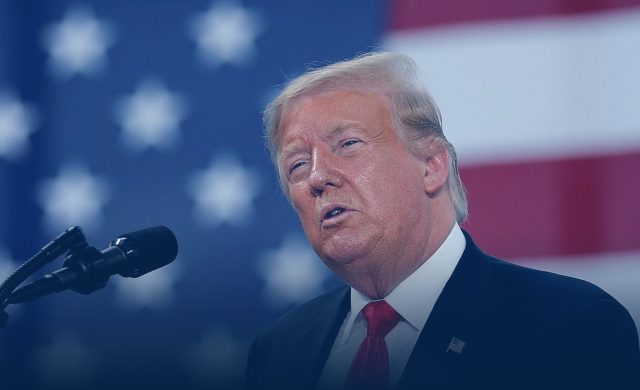 United States Donald Trump who long opposed the idea of donning face masks publicly in a surprise change of tone has said that he is all for masks and he finds himself like a Lone Ranger amidst mask-wearers. However, in the same breadth Trump also said that masks should not be made mandatory to stem the spread of novel coronavirus.

He again prophesied that the virus would vanish as the US hit a new record high 52,000 cases in a single day. The Republican President was talking to his favorite conservative news outlet Fox News a day after a fellow Republican called on him to wear the face covering so as to lead by an example. The country now has nearly 2.7mn confirmed COVID-19 cases and more than 128,000 deaths from pandemic according to the data provided by Johns Hopkins University.

Talking in an interview to Fox on Wednesday, Trump said: “I am all for masks.”

When asked if he will use one, the President said: “If I were in a tight situation with people I would, absolutely.” He added that he already wore one and people have seen him not being bare face.

He further said he would have “no problem” with wearing a mask in public. Trump cleared that he kind of liked it after wearing and looked like a Lone Ranger, a fictional character who along with his friend Tonto launched a war against the American Old West.

A classic example of eating a pie and have it, Trump also stressed that he did not consider face-covering as a mandatory in the country because there are “many places in the country where people stay very long distance”.

“If people feel good about it, they should do it.”

When asked whether he still believes coronavirus will disappear someday.

On the eve of upcoming Independence Day celebration on July 3, 2020 at Mount Rushmore, his supporters in attendance will not be coerced to wear masks and maintain social distancing.

Trump absolutely shunned the practice when CDC in April started advising people to wear masks or cloth coverings publicly to curb the spread of infection.

“I don’t think I’m going to be doing it,” he said. “Wearing a face mask as I greet presidents, prime ministers, dictators, kings, queens – I just don’t see it.”

Mr. Trump has long maintained that wearing a mask is a person decision and should not be enforced. In June, talking to Wall Street Journal, Trump said that some people only use face coverings for political point-scoring against him. In May, while visiting a factory in Michigan, he told reporters he took off a facial covering before facing the cameras because he didn’t want to give the press the pleasure of seeing it”.

Administration in WH has also defended President’s stance by saying everyone meeting the President is tested for COVID-19. The President’s daughter and senior adviser, Ivanka Trump has also been seen donning a mask.

A poll sponsored by ABC News last week found that 89% of Americans said they used a mask or wear a face covering when outside home.

The Republican has often been criticized by Democrats for belittling the importance of masks and mocking the idea.

Tennessee Republican Senator Lamar Alexander on Tuesday, joined a rare list of politicians who criticized the idea of politicizing mask wearing, saying “this simple, lifesaving practice has become part of a political debate that says if you are for Trump, you don’t wear a mask, if you are against Trump, you do”.

On the same day briefing the lawmakers, Dr Anthony Fauci issued a stark warning to the authorities claiming that the cases could reach 100,000/day if the social distancing measures and face covering practice is not implemented across US.

The rapid increase in the number of cases in recent days has prompted a number of states to reverse or pause the reopening of economy. Meanwhile, around 20 states have made the mask wearing mandatory.