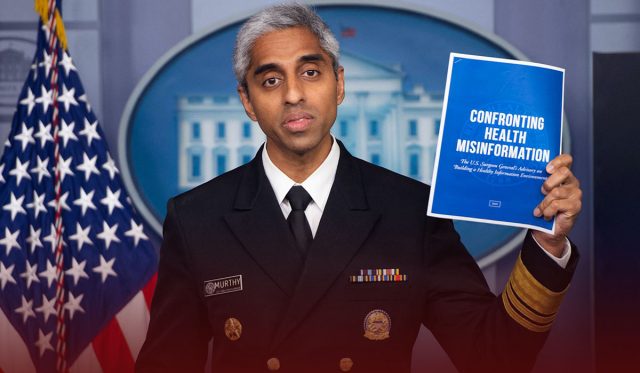 Dr. Vivek Murthy, the United States Surgeon General, warned on Sunday about the increasing number of new COVID-19 cases in the country, and he blamed social media companies for not doing enough to block misinformation about the need to take vaccination dose. Murthy told Fox News on Sunday that he concerned about what they are observing as around twenty-nine thousand new cases registered in the United States, approximately the same level in April 2020, when the outbreak initially swept through the country.

.@Surgeon_General Vivek Murthy says he issued his advisory about covid-19 misinformation because it’s impacting people’s decisions. “We know now, especially with the delta variant, that the vast majority of the people getting sick..are the people who are unvaccinated.” #PostLive

Further, he said that the highly contagious delta variant of coronavirus is a significant problem for health officials. Murthy adds that people who received vaccination are still highly protected against the virus, and it is good news. However, he noted that ninety-five percent of the deaths occurring in the United States due to the pandemic are those who refused to take the vaccination. Last week, the President of the United States, Joe Biden, said misinformation posted to social media sites is becoming the reason for killing people. The only pandemic in the country is among the unvaccinated.

Murthy said millions of Americans are using the Facebook platform, and the website removed eighteen million pieces of coronavirus misinformation. So the intention of the company is good, but it is not enough. In another interview on “This Week,” the show of ABC News, Murthy urged people using social media platforms to verify their sources before posting remarks and comments about the efficacy of the shots.

Analyses revealed that the vaccination rate in the United States is evidently lower in states that voted in 2020 November’s election for then-President Donald Trump, who at times moderated the cruelty of the outbreak, and now often of new COVID-19 cases is higher in the Republican states. In addition, the U.S. President set a goal some months ago of having at least seventy percent of adult nationals in the United States getting at least one vaccine dose by the annual 4th July Independence Day holiday.

According to the statistics of the government, America fell short of that goal, and the number now stands at around 68.1 percent. On Saturday, Facebook denied claims that it is to blame for people not getting vaccinated. Moreover, Facebook said in a blog post that Biden and his aides should stop criticizing and detailed what it did to encourage vaccinations. Facebook’s vice president of integrity, Guy Rosen, said that the Biden government decided to blame a handful of U.S. social media companies.

Read Also: Children have Low Risk of Hospitalization and Death from Coronavirus