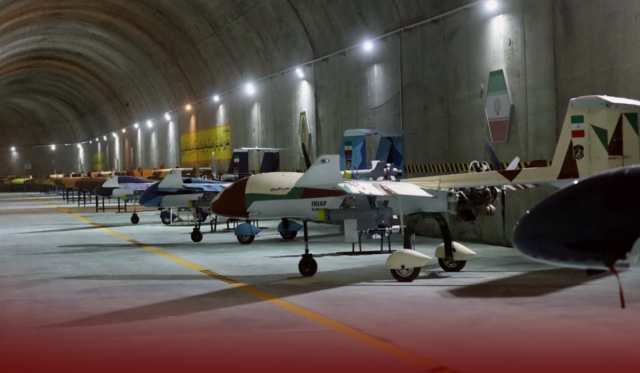 In response to Russian forces using Iranian drones in their attack on Ukraine, Ukrainian President Volodymyr Zelenskyy has revoked the accreditation of the Iranian ambassador and reduced the Iranian diplomatic staff in Kyiv. Zelenskyy reported that Ukrainian forces had shot down eight Iranian-made drones during the conflict.

Volodymyr Zelensky, the Ukrainian president, announced that the accreditation of the Iranian ambassador would be revoked and that the Iranian diplomatic staff in Kyiv would be reduced due to Russian forces’ use of Iranian drones in attacking Ukraine.#Zelensky #LimitIranEmbassy pic.twitter.com/hrNZHuoG46

During its attack today against the Dnipropetrovsk region and Odesa, the Russian army used Iranian drones. The Ministry of Foreign Affairs must strongly react to this fact,” Zelenskyy stated in his speech. Zelensky added that the air defense systems of Ukraine’s Eastern and Southern Command downed six Iranian drones. Air defenses of the Navy brought one more to the ground. And just now, the South Command told him that another Iranian drone was downed by its air defenses.

As a result of this unfriendly action, Ukrainian diplomats have revoked the accreditation of the Iranian ambassador in Kyiv. In addition, they have significantly reduced the number of Iranian diplomats at the embassy. Furthermore, Kyiv and Washington have accused Iran of providing drones to Russia. Tehran has previously stated that the country would not assist either side in the conflict since it supports a peaceful resolution.

Respect for the Sovereignty of Ukraine

In response to the provision of weapons to Russia, Ukrainian Foreign Ministry spokesperson Oleg Nikolenko tweeted on Saturday that the Iranian Ambassador in Kyiv has been revoked accreditation, and a significant reduction of diplomatic personnel has been made at the Iranian embassy.

In response to Iran supplying weapons to Russia to use in its war against Ukraine, today we announced the revocation of accreditation of the Iranian Ambassador in Kyiv, and a significant drawdown of diplomatic personnel at the Iranian embassy.

As reported by Agence France-Presse, the Ukrainian foreign ministry announced earlier that the temporary charge d’affaires of Iran in Ukraine had been summoned to comment on the issue. According to a ministry statement, the envoy was informed that Iranian weapons supplied to Russia “directly contradict the position of neutrality, respect for Ukrainian sovereignty and territorial integrity” and that such an act would seriously impact the relationship between Ukraine and Iran.

In a statement, the Ukrainian Defense Ministry said four Shahed-136 “kamikaze” unmanned aerial vehicles were shot down over the sea near the port of Odesa. A separate statement from the Ukrainian Air Force indicated that a larger Iranian drone, the Mohajer-6, was downed, the Ukrainska Pravda newspaper reported in its first edition. British defense ministers supported a Ukrainian claim this week that Ukrainian forces may have taken out a Russian drone made by Iranians.

On Wednesday, the Defense Ministry of Russia released a military intelligence update that indicated that the country had deployed Iranian-made unmanned aerial vehicles (UAV) during the nearly seven-month conflict in Ukraine.

Russia’s sham referendums have been condemned by the leaders of the Group of Seven leading industrial democracies, who claim it is Moscow’s effort to modify Ukraine’s status as a sovereign nation. The spokesman for the German government wrote in a statement that there is no way they will recognize these referendums, which appear to be a step towards annexation by the Russians.”

It was announced on Friday that Russia would hold referendums aimed at annexing four occupied regions of Ukraine, causing Kyiv and Western nations to condemn these ballots as shams, and they also pledged not to recognize the results. Ukrainian officials have reported that people have been prohibited from leaving certain occupied areas until after the four-day vote is completed, that armed groups have been entering homes, and that employees are being threatened with sacking if they do not participate.