Home Updates EU, US accused Belarus of Terrorism after it arrested Journalist 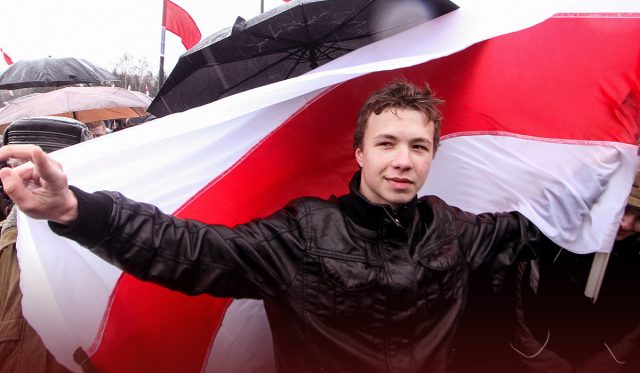 European governments and the United States accused Belarus of doing an act of governmental terrorism after it forced a commercial airliner on Sunday to make an emergency landing in Minsk and detained a critical blogger of strict president Alexander Lukashenko. Moreover, European Union and America called on the government of Lukashenko to instantly release Raman Pratasevich, a twenty-six-year-old opposition blogger who has been living in exile in Poland.

The officials diverted the Ryanair Flight FR4978 in Belarusian airspace around ten kilometers from Vilnius, Lithuania (its planned destination) – because of a suspected bomb threat. Whereas the flight was originating in Athens. The jetliner called the incident an act of aviation piracy on Monday and is cooperating with investigation teams of European Union safety and security agencies and The North Atlantic Treaty Organization (NATO) forces.

Jen Psaki, the White House press secretary, described the role of the Belarus government in Washington as shocking and said America is demanding an international investigation of the incident. Whereas Belarus is an ex-Soviet country with close ties with the Russian government. Psaki said it establishes a brazen slur to global security and peace by the government.

A spokesperson of the United Nations said Antonio Guterres – the Secretary-general, supports an independent and transparent investigation into this disturbing incident. On Monday, many airlines said that they would avoid Belarusian airspace in the future because of the incident. Similarly, European officials announced considering new sanctions against Belarus, including ending landing rights for Belarusian flights and closing their airspace for them.

I am deeply concerned by news of detention of civilian leaders of the Malian transition. I call for calm & their unconditional release. My Special Representative is working closely with ECOWAS, the AU & all other international actors supporting the ongoing political transition.

Alexander de Croo, the Belgian Prime Minister, told the media ahead of dialogs among all twenty-seven national European Union leaders that the reaction should be severe and swift. Police detained the former editor of the influential Telegram channels Nexta Live and Nexta, Pratasevich, when Belarusian officials searched the airplane. The Minsk administration said Lukashenko ordered the military officials to scramble a MiG-29 fighter jet to escort the aircraft to the Minsk airport.

Pratasevich reportedly told a fellow traveler before Belarusian police authorities led him and his Russian girlfriend off the plane that he is facing the death penalty here. On the other hand, a university in Vilnius identified her as one of its current students, Sofia Sapega, twenty-three, and demanded her release.

The government of Minsk accused Pratasevich of terrorism and infuriating riots after the Nexta channels became one of the key channels for establishing anti-Lukashenko protests last year over the election fraud. Moreover, Lukashenko won his 6th term in the August election, claiming eighty percent of the votes, although several in the republic accused him of rigging the vote.

During the protests months that followed, the European Union and the United States imposed sanctions on leading Belarusian officials. Over thirty-four thousand people were detained in Belarus, and police beat thousands of people. On Sunday, Antony Blinken, the United States Secretary of State, said that America strictly condemns the forced diversion of the airliner that was fleeing between two European Union member states and following arrest after journalist Raman Pratasevich removal from the flight in Minsk. Blinken also demands his immediate release.

In a joint statement with his counterparts from the panel of seven EU parliamentary panels, Robert Menendez, the American Senate Foreign Relations Committee Chairperson, condemned the forced landing of the flight and called it an act of piracy. The statement also called for a complete ban on all flights over Belarus, including to and from the nation, and for EU and NATO states to impose sanctions on the republic and held the ability of Belarus to use Interpol.

Proud to stand with my European counterparts in unequivocally condemning the Lukashenka regime’s reckless use of a fighter aircraft to intercept a civilian Ryanair flight and arrest journalist Raman Pratasevich.