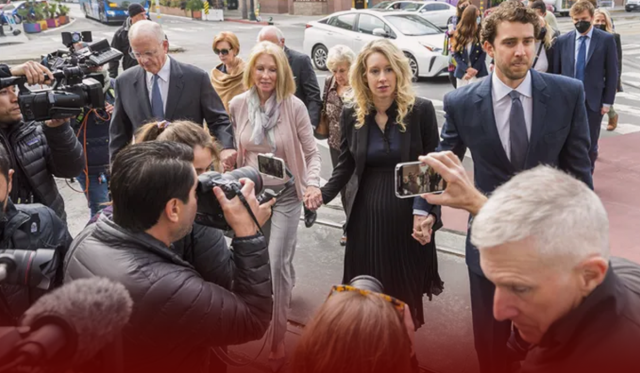 In connection with her role in defrauding investors at Theranos, Elizabeth Holmes, the founder of the company once valued at $9 billion, has been sentenced to eleven years and three months in prison. A US District Judge in San Jose, California, sentenced Holmes to three counts of fraud on investors and one count of conspiracy. After a three-month trial, a jury found Holmes guilty in January.

In a court case in which Elizabeth Holmes was convicted earlier this year of defrauding investors in her famous blood testing company, Theranos. She was sentenced Friday to 11.25 years in prison.#ElizabethHolmes #Elizabeth_Holmes #Theranos #TheranosTrial #ElizabethHolmesVerdict pic.twitter.com/G1LS11prBu

During the hearing, the judge set a date for Holmes’ surrender for April. After that, her lawyers will ask the judge for permission to maintain her freedom on bail during the appeal process. A 15-year sentence would have “made a statement that the ends did not justify the means,” said Assistant US Attorney Jeff Schenk before the judge handed down the sentence.

However, Holmes’ lawyer Kevin Downey pleaded for leniency at the hearing, asserting that Holmes was not motivated by greed like someone who had committed a “great crime.” Her court papers requested a lenient sentence that included eighteen months of home confinement and community service to prevent her from being labeled a “martyr of public passion.”

United States District Judge Edward Davila has announced in advance of Holmes’ sentencing that at least ten victims of Theranos were defrauded of approximately $121.1 million, and Holmes has deferred accepting responsibility for her actions. He is scheduled to be sentenced on 7th December on twelve counts of wire fraud brought against him by Holmes’ business partner Sunny Balwani in July.

Due to Holmes’ claims that Theranos’ miniaturized blood-testing machine could perform several tests using a few drops of human blood, the technology and finances of the company were misrepresented at trial. Prosecutors allege that the company secretly used conventional machines manufactured by other companies to conduct patients’ tests. Prosecutors considered a 15-year sentence an effective deterrent against Holmes and other fraudsters in the months following her sentencing. Silicon Valley’s startup economy relies heavily on trust and integrity, so her crimes were detrimental.

According to court documents, an eight-year sentence had been recommended by the federal probation office. Initially valued at $9 billion, Theranos Inc. promised to revolutionize how patients receive diagnostic information by replacing traditional labs with small, portable devices that could be used in the home, battlefield, and drugstores. In 2014, Forbes recognized Holmes as the world’s youngest female self-made billionaire at age 30, and her stake in Theranos was valued at $4.5 billion as of April 2016.

Furthermore, in 2015, a series of Wall Street Journal articles raised questions about the startup’s technology, and the company collapsed. In court, the prosecution alleged that Holmes committed fraud by lying about the technology and finances of Theranos rather than letting the company fail. However, during her own defense, Holmes stated that her statements were accurate when she made them.

Despite Holmes’ conviction for fraud on four counts, she has been acquitted of four additional charges alleging that she defrauded patients who paid for Theranos tests. It is important to note that Davila had denied Holmes’s request for a reversal of her convictions because the evidence at trial had supported her convictions. Holmes has the right to appeal her conviction and sentence to the 9th US Circuit Court of Appeals following the imposition of the sentence.

Holmes founded Theranos at 19 years of age to develop technology that would eliminate the need to draw tubes and tubes of blood to conduct diagnostic tests. Investors quickly became interested in her business, and she attracted hundreds of millions of dollars in investments from prominent business people and politicians, including Rupert Murdoch and Larry Ellison. In addition, because of Holmes’ influence, several prominent statesmen, including Henry Kissinger and Jim Mattis, were members of the company’s board of directors.

In addition to seeking to sentence her to 15 years in prison, federal prosecutors also requested that she make restitution payments to investors and business partners of approximately $800 million. Several hundred employees were hired, and space was leased in a famous Silicon Valley office park. The founder was one of the few young female entrepreneurs in the highly competitive field of technology, which is still highly populated by White male executives.

In addition to being featured on magazine covers such as Forbes, Fortune, and Inc., she was invited to speak at conferences and gave a TEDMED talk. During her career, she has signed deals with Walgreens and Safeway to use her technology – an inexpensive blood-testing machine known as the Edison – to diagnose conditions such as cholesterol or herpes with just a finger prick of blood.

Former employees testified during the trial that there was increasing concern within the company regarding the rapid implementation of the technology on patients. It was previously unknown to former executives of Safeway and Walgreens that Theranos used traditional machines from their companies to process blood tests. In an interview with Theranos’ board member, former Defense Secretary Jim Mattis said that if he had been aware of the limitations of its blood-testing device, he might have viewed the company differently.

Jeopardy to Patient Health and Safety

Several of the company’s tests were conducted using traditional lab equipment and blood draws, as revealed in a Wall Street Journal investigation in 2015. A regulatory investigation was initiated against Theranos, and the company was forced to go on the defensive. Its public image and empire of Holmes began to crumble.

Holmes has been barred for at least two years from owning or operating a medical lab because of a federal agency’s finding that the company’s laboratory posed an immediate threat to patient health and safety. A massive fraud charge was brought against her by the Securities and Exchange Commission in 2018, and she settled the case with a heavy fine. The company was shut down shortly after that after she left Theranos that year.

Her business partner & former boyfriend, Sunny Balwani, was initially charged with Holmes’ crime. However, a separate trial was conducted this summer in which he was convicted on twelve counts. His sentencing is scheduled for December. During Friday’s hearing, the prosecutor explained to the court that Holmes’ crimes were consistent with a 15-year sentence. In the face of the choice between allowing Theranos to fail and defrauding her investors, Ms. Holmes made the wrong decision.