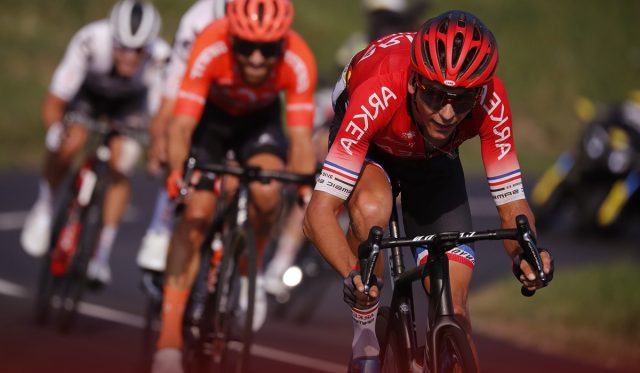 French officials initiated a probe after a spectator on Saturday interfered in stage I of the Tour de France, triggering a huge crash with less than thirty miles until the finish line. According to the Facebook statement of French Gendarmerie, they are vigorously searching the woman who held out a signboard of cardboard into the roadside, causing the pileup that resulted in many riders sustaining severe injuries.

Absolute carnage on the #TourDeFrance today – two huge crashes! The first pileup was caused by a spectator holding up a placard on the road, the second when wheels touched. Bikes and bodies flying in all directions! Chris Froome was down too. #TDF2021 pic.twitter.com/NS5EB0HmW5

Moreover, the authorities said that the suspect woman dressed in blue jeans, wearing a red & white striped shirt and a yellow raincoat, escaped the scene before authorities could reach her. People posted many videos on social media accounts that showed a spectator holding out cardboard with some text written on it and was standing alongside the road when a rider in the peloton knocked into the sign, caused a massive pileup.

Jumbo-Visma, the Dutch riding team, was among the racers that mainly impacted by the crash. According to the reports, Tony Martin was the cyclist who made contact with the signboard of the woman spectator. Unfortunately, Martin reportedly suffered a road rash from the initial pileup but was able to rejoin the race. But Jasha Sutterlin from Germany had to withdraw from the race because of severe wounds.

Many other cyclists of the race were also hurt in the crash, including Marc Soler of Spain, who withdrew from the race after the competition of stage I because he suffered fractures in both arms. Pierre-Yves Thouault, the tour deputy director, told Agence France-Presse (AFP) that they decided to sue.

He adds that they are going to sue the woman who behaved so badly, and they are doing this because the small number of people who do this don’t spoil the show for everyone. Likewise, Lieutenant-colonel Joel Scherer of the French Gendarmerie told AFP that they decided to sue the suspect when she found for accidental short-term injury through an obviously cautious breach of a duty of care or safety.