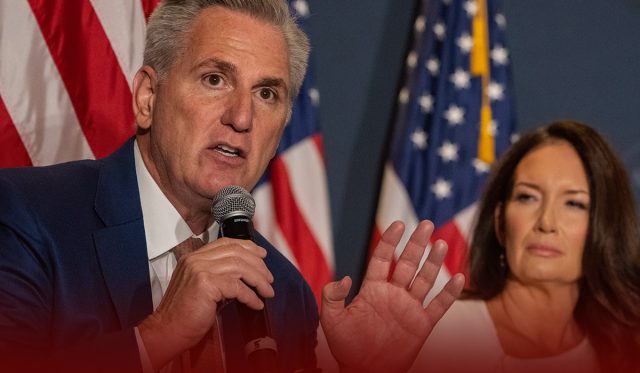 Former U.S. President Donald Trump’s allies are asking for an explanation for the Federal Bureau of Investigation’s (FBI) raid on his Florida residence, Mar-a-Lago. The Justice Department and FBI have still to comment on the raid, which the former president disclosed on Monday evening. Furthermore, far-right firebrands and mainstream GOP congressional leaders expressed anger as they claimed the Monday night raid was without evidence and called it politically motivated.

GOP rally in defense of the former Republican President Trump & condemn the FBI raid on his Florida home, Mar-a-Lago. Instead, Democrats say that no one is above the law. The raid was reportedly linked to a probe into his mishandling of sensitive material.#FBIRaidsMarALago #FBI pic.twitter.com/Rme7LfZiXZ

House Minority Leader Kevin McCarthy stated that he had seen enough. The DOJ reached an unbearable state of weaponized politicization. Further, he said that when GOP win control of the House, they will conduct urgent overseeing of the Justice Department. McCarthy also warned that Attorney General Merrick Garland should preserve his records and clear his calendar.

In response, Nancy Pelosi, the House Speaker, criticized the statement of House Minority Leader’s statement, starting by contradicting his suggestion that the GOP would take control of the House of Representatives after the upcoming midterm November elections. Pelosi told the Today Show on NBC News that no person is above the law – not even the United States President or the country’s former president.

Yesterday, Karine Jean-Pierre, the spokeswoman of the White House, stressed that Democratic President Biden did not know about the search before it happened. The FBI didn’t brief Biden, and he was unaware of the event. She told reporters that no one at the White House approved the raid. She added that the president believes that DOJ investigations should be free from political influence.

Trump About the Raid

Former Republican President Trump announced that several FBI agents had penetrated his House at Mar-a-Lago in a surprise raid. He also said that they put his residency under siege and broke into his safe. In addition, Trump described the search as part of a Democratic-led political move to stop him from running again in 2024 and declared it political discrimination.

A judge-approved warrant led the search, and legal experts say that the senior level at the DOJ must give a green signal because it is a high-profile case, and an ex-president is involved in the raid. Moreover, the FBI has not revealed the cause of the raid. Still, many United States media agencies cited anonymous sources as saying the search targeted the likely mismanaging of classified material.

The National Archives retrieved fifteen boxes of White House papers related to the presidency of Trump from Mar-a-Lago that included categorized materials. Additionally, the FBI shared the matter with Congress and referred it to the DOJ. The former Republican president faces a lot of investigations, including a New York probe into his business practices. Still, several GOP leaders portrayed the Monday FBI raid as a political assault on Trump and his supporters.

This is what happens in third world countries.

Not the United States.

Doesn’t the FBI have better things to do than harass the former PRESIDENT? https://t.co/XoP6hz5hDR

On the other hand, several Democrats welcomed the raid, and many urged the Department of Justice to provide additional information. Some raised concerns that it could boost support for Trump. Nancy said that she first learned of the raid by FBI agents through public reports on her smartphone. She told NBC News that to have a warrant, you need justification.