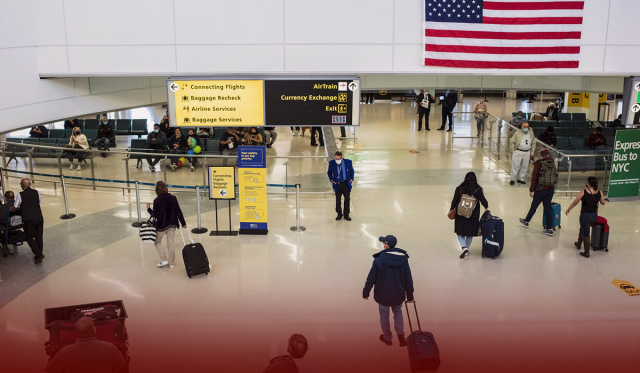 Following Beijing’s decision to lift strict restrictions to limit the spread of the Coronavirus virus, US health officials announced that travelers from China will be required to have negative tests for COVID-19 before entering the country. The new policy will apparently apply to all air travelers from China, Macau, or Hong Kong who are over two years old as of January 5.

Following Beijing’s announcement last week that its borders would be reopened soon, the US has become the latest country to require COVID-19 testing of visitors from China. Several other countries have announced mandatory examinations for Chinese travelers.#COVID19 #COVID #China pic.twitter.com/a9pHeDZJzK

Health officials advise travelers to take the tests “no more than two days before departure.” If the test is positively more than ten days before departure, passengers can provide documentation of their recovery instead of a positive test result. China announced Monday that it will lift mandatory coronavirus quarantines for foreign visitors starting January 8, prompting many Chinese to make immediate travel arrangements abroad.

China has recently seen an increase in cases of the pandemic after strict anti-virus controls were lifted. In addition to preventing the spread of the virus, the “zero COVID” policies that have been put in place, such as lockdowns and widespread testing, have caused frustration among the public and hindered economic development. The international community has criticized official reports of Beijing’s COVID data for alleged inconsistencies.

“We only have a limited amount of information about the increasing number of cases, hospitalizations, and, above all, deaths. A US health official told reporters on Wednesday that the number of tests has decreased in China, making it more difficult to determine the true rate of infection. The United States has offered China vaccines and other help in the fight against COVID-19.

Other countries have introduced similar measures

Public health officials are also finding it challenging to identify potential new variants and take swift action to stop their spread because of a lack of genomic data from China, a US official warned earlier this week. Additionally, several countries have imposed travel restrictions on travelers from China due to the pandemic, including Italy, Malaysia, India, Taiwan, and Japan.

British officials are considering new measures, including testing Chinese immigrants, according to Thursday’s Telegraph. Although Australian Prime Minister Anthony Albanese did not change the country’s travel rules, he said the government would consider “appropriate advice from health experts”. As Beijing adjusts to new policies, it stresses that the coronavirus situation remains “under control.”

White House correspondent Kimberly Halkett told Al Jazeera that while Beijing dismisses concerns about COVID as “hype,” the US government is more concerned about China’s lack of transparency. “The worsening of the COVID-19 outbreak in China is very worrying for US authorities who are unable to analyze the data they really need,” she said.

The Centers for Disease Control and Prevention lifted the testing requirement for all travelers in June. Tourists and visitors must show proof of vaccination against the coronavirus before entering the United States. However, the two countries enjoy deep economic ties and trade partnerships, despite Beijing’s rise as Washington’s main geopolitical rival.

US Secretary of State Antony Blinken said last week that the US wanted China to “take control of this outbreak” to minimize suffering, limit the spread of the virus and minimize disruption to the economy. China has not yet requested this assistance, but we are ready to do so if they choose.

After Beijing announced it would reopen its borders next month, Chinese citizens are scrambling to make international travel arrangements. Chinese citizens who want to travel abroad will be able to reapply for passports from January 8, according to the immigration administration. Almost three years after the introduction of quarantine rules, these rules no longer apply to arrivals.

Since then, a surge in traffic has been reported on travel websites. However, Chinese tourists will not have unlimited access to all countries. The rise in Chinese cases and a lack of transparency from the Chinese government have prompted US officials to consider new restrictions on travelers from China. Several US officials said in a statement that there is a growing concern in the international community about the current surge in Covid-19 in China and the lack of transparency regarding such data, including viral genome sequences.

Without this data, it is increasingly difficult for public health officials to detect potential new variants and quickly take action to reduce their spread. As cases have surged in Japan – one of the most popular tourist destinations for Chinese tourists – all travelers from China must present a negative Covid test on arrival to avoid a seven-day quarantine. In addition, India has informed travelers from China and some other countries too that they must show a negative Covid test upon arrival – although this was announced before Beijing eased its restrictions.

Covid-19 restrictions were eased across the country after angering over government policies in November saw rare public demonstrations against President Xi Jinping. In the months that followed, cases of COVID increased, with overcrowded hospitals and drug shortages reported. In its announcement on January 8, the National Health Commission announced the formal downgrading of COVID to a class B infectious disease.

People are strongly advised not to travel abroad until travel rules are relaxed. Dragon Trail International, a marketing solutions company, has announced a ban on the sale of outbound group tours and tours. Stocks of cold and flu drugs have run out in cities like Beijing and Shanghai, which experience freezing winter temperatures.

Authorities in Beijing intend to distribute Paxlovid tablets, manufactured by Pfizer, in an attempt to reduce the severity of the infection. A representative of The Global Times contacted the health centers on Monday and was told that the medicine had not yet arrived. President Xi Jinping made the first remarks on Monday, urging government officials to save as many lives as possible.