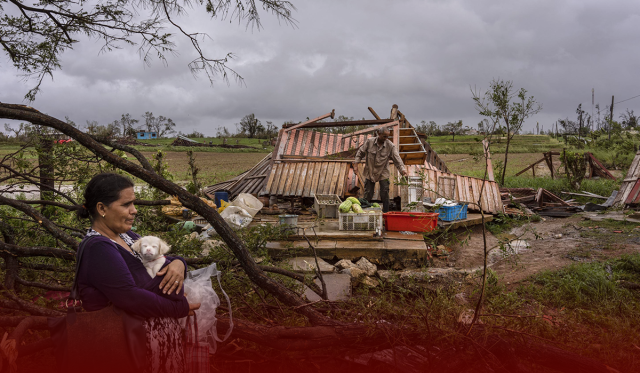 On Tuesday, Hurricane Ian struck western Cuba as a major hurricane, knocking out electricity to the entire country and affecting eleven million people. The storm is expected to intensify into a catastrophic Category 4 storm over warm Gulf waters as it churns toward Florida. Cuban officials rushed to prepare for Ian’s arrival by setting up 55 shelters, evacuating 50,000 people, and taking measures to protect crops in Cuba’s central tobacco-growing region as soon as he made landfall in Pinar del Rio province.

On Tuesday, Hurricane Ian made landfall in western Cuba as a major hurricane, leaving 1 million people without electricity. As it approaches Florida, it is expected to grow into a catastrophic Category 4 storm over warm Gulf waters.#HuricaneIan #Cuba #Florida #winds #floods pic.twitter.com/dvhRSmIp1k

In an official statement, the Natural Hurricane Center of the United States said Cuba had suffered “significant impacts” from the hurricane, which had top sustained winds of 125 mph when it struck the country in September. There are expectations that Ian will grow stronger and stronger over the warm Gulf of Mexico, reaching top winds of 130 miles per hour (209 kilometers per hour) as it approaches the southwest coast of Florida, where officials evacuated 2.5 million people.

On Tuesday evening, tropical-storm-force winds were expected across the southern peninsula, increasing to hurricane-force on Wednesday, when the eye of the storm is expected to make landfall. It was anticipated that substantial damage would be sustained across a wide area of Florida as tropical-storm-force winds extended 140 miles (225 kilometers) away from Ian’s center.

To prepare for extended power outages, Florida Governor Ron DeSantis issued a warning, urging residents to evacuate from the path of the storm if possible. However, there is a big storm coming. During a news conference in Sarasota, a coastal city with 57,000 residents that may be affected by the storm, DeSantis stated that the storm would cause much water to be kicked up as it passes. Consequently, you will likely experience a big storm surge and a significant flood event. It is the type of storm surge that poses a life-threatening threat.

Hundreds of nursing home residents in the Tampa area have been evacuated, and hospitals have also been evacuating patients. Many airports have been closed, including those in Tampa, St. Petersburg, and Key West. At least four hotels at Disney World in Orlando were closed due to the closure of Busch Gardens in Tampa. In addition, the moon rocket had to be rolled to its hangar at the Kennedy Space Center after being rolled off the launch pad. It caused the test flight to be delayed by several weeks.

Over the Gulf, Ian was expected to slow down, enabling the hurricane to grow in size and strength. Florida’s west coast is under a hurricane warning spanning approximately 290 kilometers. There is a possibility that the area could receive its first direct hit by a major hurricane since the 1920s. This area includes Fort Myers, Tampa, and St. Petersburg.

During high tide, weather forecasters predict a surge of 3 meters. There is a possibility that over 41 centimeters of rain will fall near the site of landfall. The hurricane is expected to cause significant damage to a wide area as it traverses Florida and turns northward as it moves across the state. Flash floods will likely occur across the entire state of Florida. In addition, portions of the east coast of Florida may experience storm surges as Ian’s bands approach the Atlantic Ocean. Flooding rain in parts of Georgia and South Carolina may occur throughout the weekend.

A world-famous tobacco belt in Cuba was in the path of destruction as the storm’s center moved into the Gulf. On social media, the owner of the premier cigar producer Finca Robaina posted photographs of collapsed wood and patch roofs, destroyed greenhouses, and overturned wagons.

“What we experienced was an apocalyptic disaster,” wrote Hirochi Robaina, grandson of the founder of the operation. Photos published in the state press show water flowing through the town of San Juan y Martinez, which is amidst the crisis. Pinar del Rio and Artemisa, located in the western part of the country, had no electricity.

In his remarks at the White House, U.S. President Joe Biden said that his administration would dispatch hundreds of employees from the Federal Emergency Management Agency to Florida. Further, he added that his administration would ensure that the needs of the mayors affected by the hurricane were met. The mayor urged residents to follow the instructions of local officials. He stated, “Your safety is of utmost importance.”