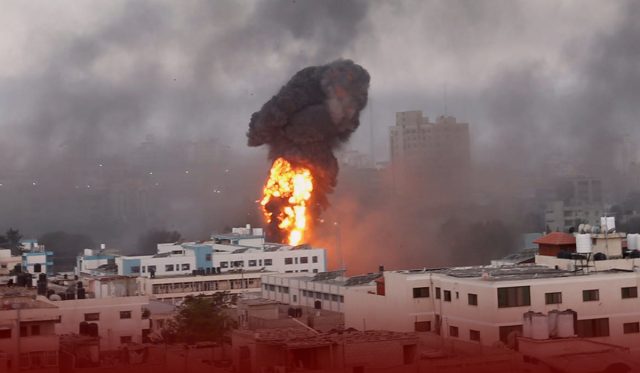 Tensions remain high after one night of heavy strikes between the Gaza Strip and Israel. According to local media, dozens of rockets were fired from Gaza following the killing of around ten people in Israeli air strikes. Tayseer Jabari, a senior figure of the Palestinian militant group, was among the dead. Israeli Friday airstrikes hit many targets in the Gaza Strip, including residential apartments and militant watchtowers.

Israel forces target Gaza with airstrikes as tensions rise. A senior figure of a Jihad group, Taysir al-Jabari, among ten people killed in attacks that followed almost a week of rising tensions. Palestinian groups responded with a volley of rockets into Israel.#GazaUnderAttack pic.twitter.com/P03MO1Btq0

Israeli forces said they carried out the strikes after an immediate threat from the Jabari group, Palestinian Islamic Jihad (PIJ). In response, the Palestinian jihad group strike with a volley of rockets into Israel. A five-year-old girl was also among the dead, while the attack wounded around fifty-five people. After the May 2021 war, some cross-border fire exchanges were from both sides.

Hamas and Israel had announced that they sought to avoid another one-to-one war over the territory, which has been under an Egyptian and Israeli block since 2007. However, yesterday’s violence drew warnings of retaliation from the Palestinian side and lifted the chance of an extended dispute. Recent Israeli strikes followed about one week of mounting tensions between the Islamic Jihad group (Hamas) and Israel.

This week, Israel arrested one of the senior commanders of the group on the West bank, leading to fears of retaliation from its Gaza leadership. According to Israel, the Islamic Jihad had been poised to respond with a reprisal attack and targeted al-Jabari and others preventatively. Israeli Iron Dome missile defense shield intercepted over 100 PIJ rockets that were fired into Israel overnight.

Egypt Preparing to Host a Delegation of PIJ Representatives

The Israeli Defense Forces stated that it had resumed rocket attacks against several militant positions in Gaza, and its forces continued to strike into the early hours of Saturday morning. However, the overnight exchange of fire marks the most severe escalation in violence since last year’s eleven-day war, which left over two hundred Palestinians and several Israeli dead before they reached a ceasefire pact.

Egypt is reportedly offering to act as a go-between to prevent further escalation. Egyptian media reported that officials in Cairo were preparing today to host a likely delegation of PIJ representatives as part of that process. Furthermore, the Israeli Defense Forces said its strikes targeted sites linked to Palestinian Islamic Jihad, including the high-rise Palestine Tower in Gaza City.

Al Jazeera’s Youmna al-Sayed reported that the latest air strikes also struck the eastern Gaza Strip, with Israeli fighter aircraft roaming above the heavily populated city on Friday evening. The Islamic Jihad stated that the enemy had started a war targeting Palestinians. Palestinians must defend their territory and people and not allow the Israeli to get away with their actions intended to weaken the resistance and national steadfastness.

On Friday, Benny Gantz, Israel’s Defense Minister, visited communities near Gaza, saying officials were planning actions to remove the threat from this region. Further, he added that they would operate with external strength and internal resilience to reinstate routine life in the south of Israel. He said that they don’t seek conflict, but they will do anything to defend their citizens.