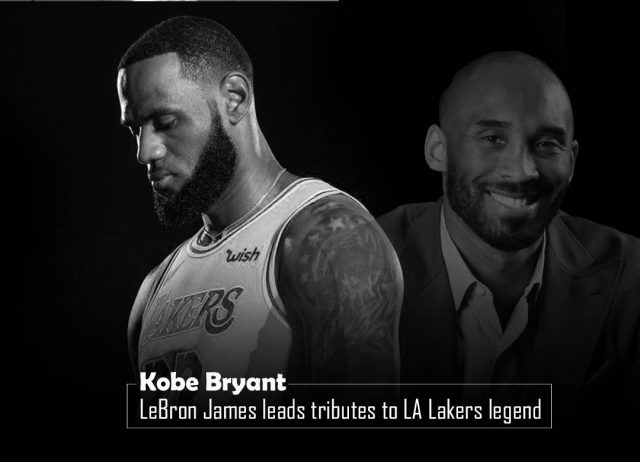 Lebron James led tributes to Lakers legend Kobe Bryant in his first game since the death of former #24 for the franchise in a helicopter crash. Kobe was traveling with his daughter Gianna for her game with seven others on board when helicopter met the deadly crash; nobody on board survived.

The Lakers lost to Blazers 127-119 at the Staples Center game as the hosts teamed up to remember their Legend’s 20-year illustrious career with the Lakers where he came at the age of 18 to later deliver 5 Championships and be remembered as one of their goats. A KB Logo was painted on the court and Laker’s roster wore #8 and #24 jerseys to honor the iconic shooting guard that served the team for two decades.

R&B signer Usher sang Amazing Grace in the loving memory of the Kobe, her daughter Gianna and those passed away in the crash. Kobe’s #24 and Gianna’s #2 jerseys were put on the seats where the duo sit last time to cheer for the home team.

“This is a celebration of the 20 years of sweat, the tears, the broken-down body, the getting up,” Lakers forward James said.

“Sitting down to everything, the countless hours, the determination to be as great as he could be.

“Tonight, we celebrate the kid who came here at 18 years of age, retired at 38 and became the best dad we’ve seen over the last three years.”

Bryant who called time on balling for Lakers in 2016 despite being not allowed to fly in fog was taking his 13-year daughter to a practice game when the crash happened in Calabasas, California.

Melo (Carmelo Anthony) a close friend of Kobe couldn’t show up for Portland Trail Blazers as he was not ready after the heart-wrenching incident according to Damian Lillard who plays point guard for Blazers.

NBA start will don Kobe’s and Gianna’s jersey number kits in Feb’s All-star weekend to pay tribute to the Father and sister with Team James donning #2 jersey wore by Gianna and Team Giannis wearing #24. Jersey’s will also be imprinted with nine stars to remember the all nine victims of the crash.