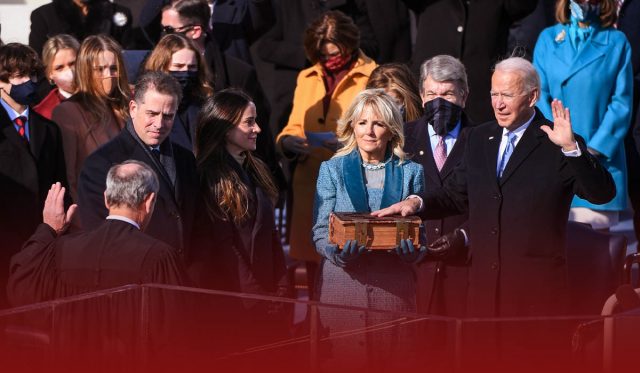 Democratic Joe Biden took oath as the 46th President of the United States on Wednesday, vowing to handle an array of trembling challenges and bring unity and healing to the nation. The president called his inauguration time a historical moment of crisis and challenge for the country. Further, he called on the nation to end its uncivil war and embrace unity amid several frightening crises in the country. Moreover, he stressed that unity is the path forward and Americans meet this moment as a single unit. While adopting the above points, the nation will surely overcome all the crises with a big success.

Biden recited the oath along with his wife, Jill Biden, with his hand on his family Bible. Chief Justice of the U.S. John G. Roberts Jr. administered the oath procedure, and the moment marked the peak of a career in public leadership that started fifty years ago. Some moments before, Kamala Harris took her oath as the 49th Vice President of the United States. She made history to become the first female vice president of the country, and also the first person with Asian heritage, and the first Black American to hold the second-highest office of the nation. Harris placed her hand on twin Bibles, one belonging to Thurgood Marshall (the first African American justice of the Supreme Court) and one from a family friend.

Biden replaces the former president Donald Trump, whose controversial single term continuously dogged by allegations that he failed to sustain his own oath. In his recent last weeks, Trump refused to acknowledge the election results and tried to intimidate his vice president, Mike Pence, into violating the Constitution and stimulated a fatal attack by supporters on the United States Capitol. Biden mainly refrained from naming Trump directly on Wednesday, while he used his first day in office to silently reject the legacy of the outgoing president – signing several executive orders that reverse Trump administration actions affecting a variety of subjects, including climate change and the COVID-19.

The president signed a total of seventeen executive orders and actions on Wednesday, including moves to rejoin the World Health Organization (WHO) and the accord of Paris climate, as well as a mask mandate for the federal property, after Trump withdrawn from those accords and other worldwide forums during his presidency. The Democratic president didn’t wait long to start staffing up his new administration, inducting top White House allies in an unspectacular virtual ceremony and looking toward confirmation of his first Cabinet member, Avril Haines, the Director of National Intelligence.

Biden, 78, is the oldest ever president of the United States to take the oath. He secured his designation by vowing to be the polar opposite of Trump – to cool waves of anger else than fuel them. Moreover, the president promised to reverse much of the legacy of the former president and roll back what he refers to as the soul of America by proving that the last four years signified an irregularity instead of an enduring crack in the national unity. Four years after Donald Trump delivered a harsh and dark inaugural address promising to end American killing, Biden took office, intending to appeal to the more hopeful sentiments of the country and make an appeal for unity.

Biden says in his speech while calling on the Americans to start anew that politics does not have to be an intense fire, destroying everything in the path. The twenty-one-minute speech of Biden hewed sharply to the themes that shaped his presidential run, with many references to comity, unity, and rebuilding of U.S. leadership on the worldwide stage. The president quoted his inauguration as a symbol of the nation turning the page after its democracy tested as never before. Three former American presidents were sitting behind him: Democratic Barack Obama, Democratic Bill Clinton, and Republican George W. Bush. After taking oaths, the president and vice president appeared along with those former presidents in a bilateral tribute at the Tomb of the Nonentities in Arlington, Va.

The former president, Trump, didn’t participate in the inaugural events of the top two seats of the country. A mob flooded the platform on which Biden took oath fifteen days back, at the West Front of the Capitol. The mob provoked by a provocative Trump speech, which took the Senate and House chambers trying to stop representatives from affirming the election victory of Biden. However, the decision to take oaths of offices at the Capitol from Biden and Harris was itself an act of boldness in the outcome of the hours-long riot. During the riot, former president supporters screamed their aim to attack top elected officials physically.

Biden vowed to oppose and defeat the scourge of domestic terrorism and white supremacy, challenges that took on the latest priority in the wake of the attempted insurgence. He said that a call for racial justice, some four hundred years in the making, moves the nation—the dream of implementing justice for all deferred no longer. Now an upsurge of political extremism, domestic terrorism, and white supremacy that the nation must oppose and will defeat. At the same time, Biden described the United States as a place of optimism and hope, of boundless possibilities, during an emotional goodbye event in Delaware on Tuesday.

The capital of the country remained in a state of partial lockdown, with over twenty thousand National Guard members patrolling the streets to avoid a replay of the attempted 6th January insurgency that left four demonstrators of Capitol and one police officer dead. The oath place of Biden and Harris, the National Mall filled not with people but with twenty thousand flags, an echo of the deadly coronavirus pandemic. The outbreak is still increasing countrywide one year after Trump first proclaimed it was completely under control.

The president thanked the former three U.S. presidents who attend his inaugural ceremony. Donald Trump intentionally missed the ceremony – an unusual move that makes him the first outgoing president to skip the ceremony of his successor since 1869. However, Trump is the 4th president in the United States history not to attend the Inauguration Day of his successor. Former presidents Andrew Johnson, John Quincy Adams, and John Adams didn’t attend the inaugural ceremonies of their successors.

Read Also: Everything you need to know about 2021 Inauguration Day