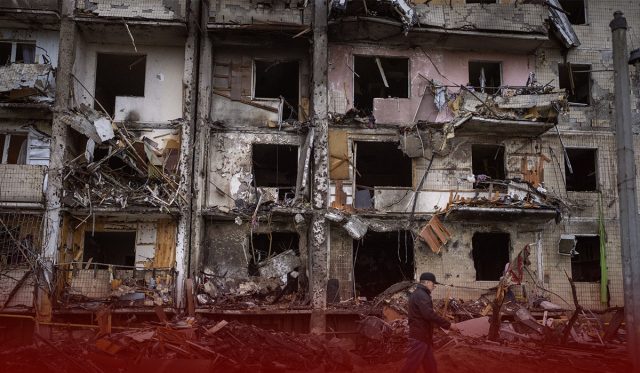 Earlier Saturday, Russian troops invasion toward Kyiv, the capital of Ukraine, as explosions resonated across the city, and Ukrainian President Volodymyr Zelenskyy urged the nationals to stand firm against the barricade that could determine the future of the country. Additionally, the local media reported hundreds of casualties in the fighting between the Russian and Ukrainian forces.

On Saturday, Russian forces pressed its invasion of Kyiv, the Ukrainian Capital, after unleashing airstrikes on military bases and cities, while the Ukrainian president urged the residents to stand firm against the military blockade that could determine the future of the country. pic.twitter.com/VKlcauhmMC

The Russian troops included shelling that cut through an apartment building in the capital and pounded schools and bridges. Moreover, there were mounting signs that Moscow may be intending to overthrow the Zelenskyy government, which American officials described as the ultimate intention of Vladimir Putin, the Russian President. Yet the attack represented the boldest effort of Putin to redraw the map of the world and revive the Cold War-era influence of Russia.

After the Russian aggression, the international community triggered its efforts to end the assault, including severe and swift economic and other sanctions on the Russian government. As Ukraine fought off gunfire and explosions, the Ukrainian president asked for a cease-fire and announced that Russian forces attacked many cities of the country. Zeleskyy added that his country’s fate is being decided right now.

The Moscow armed troops continued their advancement into the Ukrainian capital, laying claim Friday to Melitopol, the southern city of Ukraine. However, it was unclear how much Ukraine was under Russian control and Ukrainian control. On the other hand, the Ukrainian military reported to shoot down one 11-76 Russian transport aircraft carrying paratroopers near Vasylkiv, a city forty kilometers south of Kyiv. The transport aircraft can carry up to one hundred and twenty-five paratroopers, but it was unclear how many were on board.

Furthermore, the United States and other world powers imposed the strictest sanctions on Moscow as the attack echoed through the worldwide economy and energy supplies. They also threatened to hit ordinary households further. The United States and its allies argued that the effort would highlight the international isolation of Russia. Nevertheless, Moscow remained relentless, vetoing a United Nations Security Council resolution demanding that Russia stop attacking Ukraine and immediately pull out troops.

NATO to Deploy its Response Force in the East

With the UAE, India, and China curbing, the eleven-one vote showed significant but not absolute opposition to the Russian aggression of its weaker military neighbor country. Meanwhile, NATO decided to deploy some parts of the response force to help protect its member countries in the east for the first time in history. However, it didn’t say how many troops would send, but it would involve air, sea, and land power.

The second day of the Russian attack focused on Kyiv, the capital of Ukraine, where media reporters heard explosions starting before the start. Likewise, gunfire was reported in many areas. Ukraine officials reported around one hundred and thirty-seven deaths on their side from the first full day of battling and claimed hundreds on the Russian one. On the other hand, Russian officials released no statistics regarding casualties.