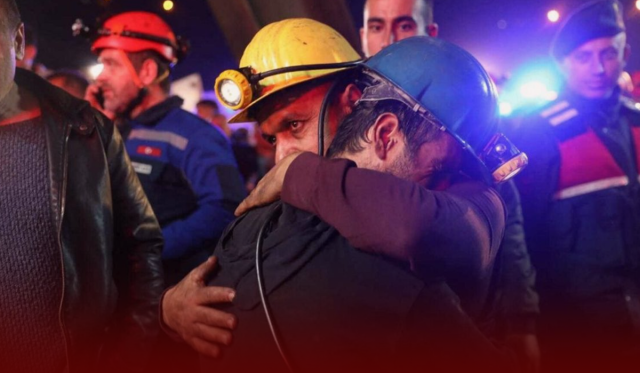 A coal mine explosion in northwestern Turkey’s Bartin province has killed at least 40 people and left dozens trapped underground. It is estimated that approximately 110 people were inside the mine at the time of the blast on Friday, almost half of whom were over 300 meters beneath the surface. In an announcement published by the Turkish Ministry of Health, Fahrettin Koca reported that eleven people had been rescued and received treatment.

Officials said on Saturday that dozens of people were trapped beneath the rubble of an explosion inside a coal mine in northern Turkey. An explosion occurred on Friday in the town of Amasra in Bartin province.#MineExplosion #deaths #coalmine #Turkishmineblast #Amasra #Bartin pic.twitter.com/kU2cT4GRMt

The rescue crews continued digging through rocks throughout the night to find other survivors. Furthermore, the Black Sea coast facility in Amasra, where the miners have been trapped for several days, was shown in video footage emerging blackened and bleary-eyed. Family members and friends of the missing were also spotted near the mine, anxiously awaiting information about their loved ones.

Turkey’s disaster management agency, AFAD, announced that several rescue teams had been dispatched to the area. Furthermore, it has been reported that Turkish President Recep Tayyip Erdogan will cancel all his other plans for the weekend and will fly to the accident site on Saturday. In a tweet, Erdogan expressed hope that the number of deaths would not rise further and that our miners would be found alive.

What was the cause of the blast?

The Bartin governor’s office reports that the blast happened around 15:15 GMT, 300 meters (985 feet) below the mine’s entrance. Anadolu Agency published a statement stating, “forty-four people have been trapped three hundred meters below the mine’s entrance, while five others are trapped around 350 meters below the entrance.” Hundreds of people gathered around a damaged white building near the entrance to the pit with tears in their eyes.

Turkish mine workers’ union Maden-Is reported that methane gas had built up. Still, other officials suggested that it was premature to conclude about the cause of the blast. An accident in the town of Soma, western Turkey, in 2014 resulted in the death of 301 people, the deadliest mine disaster in the country’s history.

A Turkish energy minister reported preliminary indications that the explosion was caused by firedamp, an explosive mixture formed by methane and oxygen in coal mines. “It is a deplorable situation that we are facing,” he stated. He added that there were partial collapses within the mine, with no ongoing fires and proper ventilation.

A visit by Turkish President Tayyip Erdogan to the site is expected to take place on Saturday. Recai Cakir, the mayor of Amasra, has noted that many of the survivors have suffered “serious injuries.” An employee who could escape on his own stated: “There was dust and smoke, and we are not sure exactly what happened.” During the immediate aftermath of the disaster, anger grew among the public, and discontent with the government’s responses.

The Interior Minister, Suleyman Soylu, reported the deaths of 40 miners on Saturday. Fifty-eight others were rescued unharmed or managed to escape the mine alone, while eleven were injured and hospitalized. Uncertainty remained about the status of one miner a few days ago. Fatih Donmez, the energy minister, stated that rescue efforts have almost been completed. In an earlier statement, he reported that there was still fire burning in the mine’s gallery, where more than twelve miners were trapped. He said that the work of isolating and cooling the fire continued.

Overnight, Donmez stated that preliminary assessments indicated firedamp may have been the cause of the explosion. Firedamp is a term used to refer to flammable gases found in coal mines. Three prosecutors were conducting investigations into the explosion.

An employee of the mine who works the day shift told the news that he saw the news and rushed to the site to help with the rescue. We witnessed an unimaginable terror; there are no words to describe what we saw; it is deplorable,” Celal Kara, 40, said. I was worried about those guys because they are all my friends… I was concerned about them because all of them had dreams,” the 14-year-old miner said. As he exited the mine, his face was covered in soot.