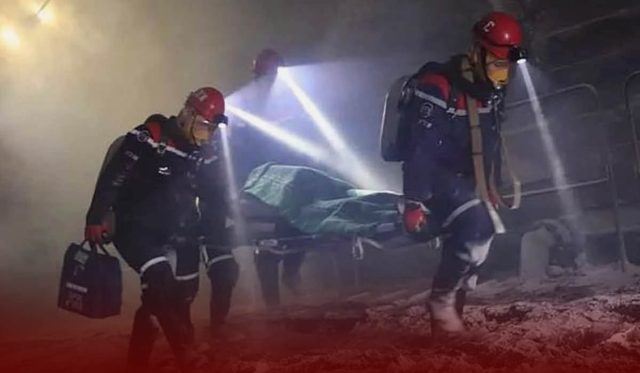 On Thursday, a gas leak prompting fire in the Siberian coal mine killed at least fifty-two people, according to the statistics of Russian news agencies. Six rescue workers were also killed during their efforts to bring out dozens of men. The officials called it one of the worst mining disasters of Russia since Soviet times. In addition, the regional Investigative Committee said that security officials arrested three people, including Listvyazhnaya’s director and deputy director. They accused them of charges on suspicion of violating industrial safety rules.

Death toll in Russian mine tragedy jumps past 50:A gas leak in a Siberian coal mine killed at least 52 people on Thursday, Russian news agencies said, including six rescuers who were sent down to try to bring out dozens of men in what was one of Russia’s worst mining disasters pic.twitter.com/dAQmKqM570

News agency Tass reported that there would be no survival of the mine’s rare methane gas explosion incident. On the other hand, BBC News reports about two hundred and eighty-five people were in the mine when the mishap occurred; of those, most miners escaped, forty-nine injured, and four were in critical condition. Initially, the officials stated that the rescuers found fourteen bodies, but rescue efforts paused amid smoke from high methane gas and fire levels.

Survivor Found in Coal Mine Accident

The fire explosion occurred in a mine in Kemerovo city in southwestern Siberia, around 2200 miles east of Moscow. According to the Associated Press, Governor Sergei Tsivilyov of Kemerovo stated that thirty-five miners were missing with their locations unidentified. On the other hand, Tass reported that three rescue team members, who were in a group of six missing rescue members, were found dead, while the other three remained missing. Emergency officials said that there was no chance of finding survivors alive.

A top local official announced that rescuers found a survivor in the coal mine tragedy, according to recent reports. Acting Emergency Minister Alexander Chupriyan said the survivor found in the mine was a rescuer who had previously announced missing. AP reported the teams rescued a total of 239 people from the mine, and sixty-three of them sought medical assistance.

Previous History of Coal Mine Accidents in Russia

According to the local Russian media, a methane gas explosion killed thirteen people in 2004. In 2010, two methane explosions occurred in the Raspadskaya mine, and fire killed around ninety-one people. Moreover, in 2016, thirty-six miners died in a series of methane gas explosions in another coal mine. In the wake of the deadly incidents, officials investigated the safety of fifty-eight coal mines of Russia and declared thirty-four percent of them, or twenty, possibly unsafe.

The blast highlighted the difficulties the country faced in implementing modern safety standards in a dangerous mining sector in which deadly blasts are common. Regional authorities declared three days of grief. The Investigative Committee of Russia launched a criminal investigation into the fire over violations of safety measurements that led to many deaths. On Friday, another probe launched into the alleged negligence of state officials that inspected the mine earlier this month.

Climate change intensified pressure on nations to quit coal, and over forty countries vowed to end their coal-fired power at the 2021 Glasgow climate conference. However, the United States, India, Russia, and China didn’t sign the pledge. Vladimir Putin, the President of Russia, said he had talked with the emergency officials and governor at the coal mine incident. Putin also expressed his condolences for the loss of precious lives. Previously, Deputy Energy Minister Anatoly Yanovsky reported that closing the twenty dangerous coal mines that produce around one hundred and five tons of coal yearly would be expensive and lead to a coal shortage.