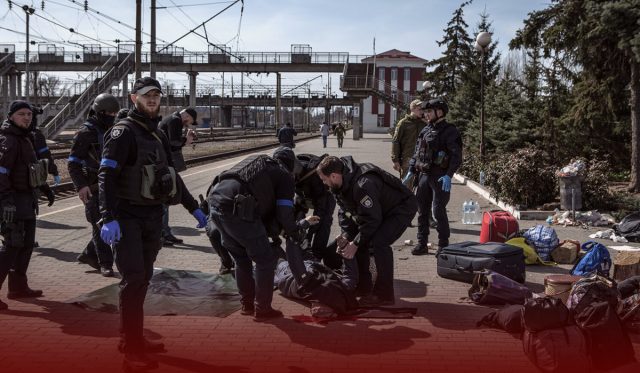 Ukrainian officials said that Russian forces launched a missile to hit a train station in eastern Ukraine. Thousands of civilians gathered Friday, killing at least fifty-two and wounding several people. The crowd mainly consisted of women and children trying to flee looming Russian aggression across the wider Donetsk region. Ukrainian authorities further said that thousands of people were waiting for evacuation through trains.

Ukrainian said that at least 52 people were killed and dozens wounded in a missile attack that hit a crowded train station in eastern Ukraine where thousands of civilians gathered. Zelensky called for a tough global response from global leaders and assured of a retaliate response pic.twitter.com/PowdLuFrvZ

Both Russia and Ukraine blamed each other for the brutal attack. The United States, United Kingdom, and the European Union condemned the deadly incident and announced further military support for Ukraine. Oleksandr Honcharenk, the Mayor of Kramatorsk, told BBC News that two missiles hit the railway station at around 10:30 local time on Friday.

Josep Borell, the foreign policy chief of the European Union, said that the attack in Kramatorsk was another effort to break morale after the Russian troops were unable to win by fighting the Ukrainian military. Furthermore, according to the Ukrainian prosecutor general’s office, approximately four thousand people, mainly women and children were at the station when missiles hit the area.

Tochka-U Missiles Used in the Attack

Some minutes after the deadly attack, Kyrylenko blamed Moscow for using its Iskander short-range ballistic missile with many munitions’ warheads. Later, he corrected himself, saying that Tochka-U missiles hit the railway station. Likewise, the Russian defense ministry said that Tochka-U rockets were used in the recent strike. The ministry also accused Ukrainian military forces of the attack. According to Amnesty International weapons expert, Tochka-U rockets are highly inaccurate because they regularly miss their targets by half a kilometer or more.

During yesterday’s video address, Ukraine’s President Volodymyr Zelensky told his nation that they would make efforts to establish every minute o who did what, where the missiles came from, who gave the attack orders, who gave the command, who transported it, and how this strike agreed to launch. In addition, Ben Wallace, the Defense Minister of the United Kingdom, condemned the attack as a war crime, and United Nations Secretary-General Antonio Guterres called it downright offensive.

Western officials and Ukrainian authorities repeatedly Russian troops and Putin of atrocities in the war that started on the 24th of February invasion. As a result, over four million Ukrainian nationals fled the country, and millions were forced to be displaced to other country regions. On the other hand, a senior United States defense official said that Russia lost around fifteen percent to twenty percent of its combat power overall since the invasion started.

The Ukraine government demanded harsher sanctions against Russia, and it also called for more weaponry support, as a missile attack killed several civilians at the railway station. Zelensky called the Kramatorsk, in the Donetsk eastern region, a deliberate invasion of civilians. In response, the White House announced that it would support efforts to probe the railway station missile attack.

On Friday, the U.S. extended its export sanctions against Moscow and ally Belarus, restricting access to importing items like pipe valves and fertilizer. Moreover, on Thursday, Ukraine secured a recent commitment from NATO members to supply a huge range of weapons.

The Slovak Republic denoted its S-300 air defense system to the Ukrainian military, while the United Kingdom will deploy an additional hundred million pounds of military support. In addition, the Czech Republic shipped rocket launchers, infantry fighting vehicles, tanks, and howitzers fighting vehicles to Ukraine and would deliver more.