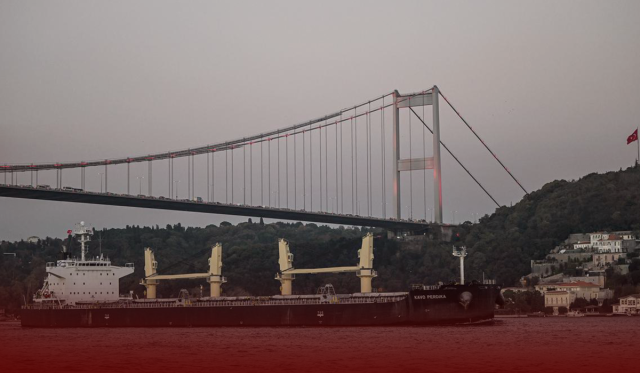 The Russian government announced Wednesday that it would resume participating in an agreement to facilitate grain shipments from Ukraine through the Black Sea. “In light of the guarantees received at present, the Russian Federation considers the agreement to be sufficient and resumes implementation,” the defense ministry said. However, after claiming that Ukraine attacked the Russian Black Sea fleet with drones, Moscow suspended its participation in the tournament on Saturday.

The Russian government agreed to rejoin the wartime agreement that allowed Ukrainian grain & other commodities to be shipped worldwide. According to the UN’s refugee chief, almost 14 million Ukrainians have been driven from their homes since the Russian invasion#graindeal #grain pic.twitter.com/nLWqEVjj3B

In July, the United Nations and the Turkish government reached an agreement with Russia and Ukraine that allowed for the resumption of Ukrainian grain shipments and the loading of Russian fertilizer, despite the global food crisis. Antonio Guterres, the United Nations Secretary-General, expressed through his spokesperson to warmly welcome the announcement from Moscow to resume its participation in the Black Sea Grain Initiative.

Further, he said he continues his engagement with all the stakeholders toward the renewal and implementation of the initiative. The General Secretary also remains committed to removing the remaining difficulties the Russian food & fertilizers exports. In recent days, the Russian suspension interrupted shipments while the other parties to the scheme worked to obtain some shipments out of Ukrainian ports and to perform some of the inspections in Istanbul called for under the agreement. On the other hand, Volodymyr Zelensky, the President of Ukraine, welcomed the deal as a significant diplomatic outcome for the nation and the rest of the world after Moscow rejoined the agreement.

On Tuesday, a Pentagon official indicated that “concerns” have been raised regarding Russia’s attempts to secure weapons from Iran and North Korea. United States officials report that Russian military personnel assists the Russian military in launching drone attacks from the Crimean Peninsula using Iranian-made drones. The Iranian government has repeatedly denied that it provides drones and military assistance to the Russian army.

“The Pentagon remains concerned that Russia may acquire additional advanced weapons capabilities from Iran – such as surface-to-surface missiles – for use in Ukraine,” said Pat Ryder, Pentagon press secretary. Reports from CNN indicate that Iran is preparing to send Russia approximately one thousand additional weapons, including short-range surface-to-surface missiles and suicide drones, have been published. A second accusation made by the White House on Wednesday was that North Korea had shipped artillery shells via other countries to Russia, an allegation that North Korea has denied.

Deputy National Security Council spokesman John Kirby said the United States believes North Korea is “attempting to make it appear that the missiles are being sent to nations in North Africa or the Middle East.” The official did not estimate the amount of ammunition and weapons being sent to strengthen the Russian effort, but he did emphasize that they would not alter the course of the conflict.

On Wednesday, Russia was denied its request to have a formal investigation into the allegations that Ukraine and the United States have biological weapons programs in Ukraine conducted by United Nations Security Council. Both Kyiv and Washington deny this claim. Among the countries supporting a draft Security Council resolution, China was the only country to vote with Russia to support the measure.

Most council members, including the United States, United Kingdom, and France, voted against it. The remaining ten members abstained. Additionally, the nuclear disarmament officials of the United Nations said that they are not unaware of any biological weapons programs in Kyiv.

The Joint Coordination Center in Istanbul oversees a grain deal that has allowed 9.7 million metric tons of grain to leave Ukrainian ports. In the aftermath of the Russian invasion of Ukraine, a major grain exporter, this has provided much-needed relief to a global food shortage. A joint team of Russian, Turkish, Ukrainian, and United Nations officials will inspect ships moving to and from Ukraine by the deal reached in July.

In a statement issued on Saturday, Russia announced that it was temporarily withdrawing from the agreement, accusing Ukraine of misusing the safe shipping corridor to launch drone attacks against its fleet. After that, some shipments continued entering and leaving Ukraine, but the United Nations announced on Tuesday that no deliveries would be made on Wednesday.

Zelenskyy called on Tuesday for the protection of the corridor to be both reliable and long-term, while his counterpart Vladimir Putin demanded guarantees. In a call with Zelenskyy on Tuesday, French President Emmanuel Macron denounced Russia’s decision to exit the deal saying it again harms global food security”. Ukraine had dismissed Russian accusations as a “false pretext” for withdrawing from the agreement.

There has been long-standing opposition to this deal from the Kremlin, which claims that most consignments were being delivered to European countries rather than low-income nations where grain was most needed. However, the Ukrainian government has denied this claim, and the data compiled by a monitoring group in the context of the agreement does not support this claim.

Despite Russia’s announcement that it would suspend grain deliveries, cargo loaded with grain kept sailing on Monday and Tuesday. However, the UN said any deliveries after Russian announced its suspension would be temporary and extraordinary. On Monday, Kremlin spokesman Dmitry Peskov stated that continuing exports without Russian participation would be dangerous. On Wednesday, Russia’s defense ministry said that it had received written guarantees from Ukraine due to the United Nations’ involvement and the assistance of Turkish authorities.

Historically, the Russian military has used Belarus, an economically dependent ally, as a point of entry for troops and missiles to be sent into Ukraine. If the Belarusian army participates in the conflict, Kyiv is concerned that it may be drawn directly from the north along the 1,080-kilometer border between the two nations. Spanish Foreign Minister Jose Albares vowed on Wednesday, visiting Kyiv, to help Ukrainian air defenses with another military aid package.

Read Also: US to Send Another $725 Military Aid for Ukraine