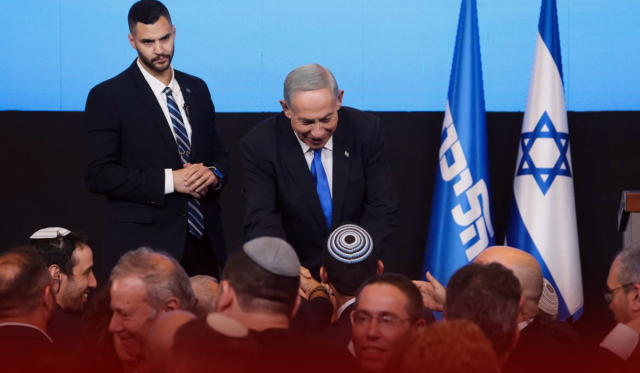 In preliminary exit polls, former Israeli Prime Minister Benjamin Netanyahu appeared to have a narrow lead early Wednesday in Israeli elections, indicating the possibility of a return to power because of the endorsement of an extreme right-wing ally who has made inflammatory statements against Palestinians. It should be noted that these exit poll results are preliminary, and may change as the votes are tallied.

Earlier Wednesday, exit polls indicated that former PM Benjamin Netanyahu held a narrow lead in the Israeli elections, likely paving the way for his return to power because of the support of a right-wing ally known for his anti-Arab statements.#IsraelElections2022 #Netanyahu pic.twitter.com/kC1yGRqpXn

Nonetheless, they observed that the Israeli electorate continued to shift to the right, further dimming the prospect of peace with the Palestinians and setting the stage for a possible confrontation with the Biden administration and the supporters of Israel in the United States. In less than four years, Israel has held five elections, all largely centered on Netanyahu’s suitability to serve as prime minister. The former prime minister is being tried for a number of corruption charges, for which he has been accused of a witch hunt. His opponents regard him as a fraudster and a threat to democratic institutions.

In keeping with past elections, the vote was close. All three major Israeli television stations projected that Netanyahu and his hardline allies would secure sixty-one or sixty-two parliamentary seats, thus giving him the majority necessary to govern in the 120-seat parliament. Despite this, polls indicated that a small Arab party was close to crossing the threshold required to enter parliament – an event that may result in its narrow majority being wiped out.

It took election officials throughout the night to count the votes. It was unclear how the outcome would turn out early on Wednesday, with only about 45% of the ballots counted. The formation of a coalition government may still require weeks of negotiations if Netanyahu’s allies win the election. The possibility of a continuing deadlock and a new election round is also possible. In a press conference held late at night in Jerusalem, Netanyahu exhorted his supporters to have patience and claimed that the Likud Party was “on the verge of a very major victory.”

A suspected fear that Arab voters would deny him victory prompted Netanyahu to tweet allegations of vote tampering and violence at Arab polling stations. Despite the lack of evidence supporting the candidate’s claims, the country’s nonpartisan Central Elections Committee dismissed them as “basic rumors.” Netanyahu later explained that he was seeking the ultimate purity of the electoral process, as he said that democracy is based on this principle. Israel’s Arab population comprises about 20% of the population and has significantly prevented Netanyahu from winning recent elections.

It was a different story this time since their votes were split among three different factions, all of which were at risk of missing the threshold, resulting in the votes being wasted. Before he was ousted last year by a diverse coalition led by Yair Lapid, Netanyahu served as Israel’s longest-serving prime minister. He served for 12 consecutive years and 15 years overall. One year after Lapid’s coalition came to power, which included the first Arab party to join a government, the coalition collapsed due to infighting. According to polls, there was a likelihood that those parties would capture only 54 seats.

Announcing that the race had not been decided, Lapid addressed supporters early Wednesday morning. “Nothing is final until we have counted the final envelope,” he explained. The far-right party made a strong showing of Itamar Ben-Gvir, Religious Zionism, which came in third place. An all-male campaign meeting was held in Jerusalem, where religious men wore skullcaps and waved Israeli flags in celebration of the election.

Before his assassination in New York in 1990, Meir Kahane, a racist rabbi and leader of the Kach party was banned from parliament and declared a terrorist organization by the United States. Ben-Gvir is a disciple of Mani Kahane. The agenda of Kahane called for banning intermarriage between Arabs and Jews, the deportation of large numbers of Palestinians, and the expulsion of Arabs from Israel.

Kahane was widely considered to be a pariah, but Ben-Gvir is among Israel’s most popular politicians because he is frequently featured in the media, has a cheerful disposition, has a knack for deflecting criticism, and called for a harder line against Palestinians during the period when heavy fighting took place in the occupied West Bank. Young ultra-Orthodox men are among his strongest supporters. One of his strongest supporters is the younger generation of ultra-Orthodox men.

Ben-Gvir lives in Kiryat Arba, a settlement in the West Bank that adheres to hardline policies regarding settlement construction. Recently, he brandished a handgun as he called on Palestinian stone-throwers to surrender in a tense Palestinian neighborhood of Jerusalem after describing Arab colleagues in parliament as “terrorists.” He has also called for the deportation of those who are “disloyal.”

Palestinian Prime Minister Muhammad Shtayyeh declared that the emergence of the far right in Israel is a consequence of increasing manifestations of extremism and racism in the country. Ben-Gvir and Bezalel Smotrich, the leader of Ben-Gvir’s party, intends to drive a hard bargain if the Netanyahu alliance is elected to control a majority. Ben-Gvir has announced that he intends to seek the Cabinet post that has responsibility for overseeing the Israeli police force.

They also intend to seek legal reforms that weaken the judiciary’s independence and give parliament the power to reverse court decisions. Those charges may be dismissed, clearing the way for Netanyahu to be exonerated of criminal charges. The party’s Smotrich and other members have often made anti-LGBTQ remarks.

It is possible that such positions would bring a future Netanyahu government into conflict with the Biden administration, which supports the establishment of two states between Israel and the Palestinians. A similar policy could also alienate Israeli allies in the United States, particularly the majority liberal Jewish American community. Among the most radical politicians in Israeli history, Ben-Gvir is one of the most influential. Yohanan Plesner, president of the Israel Democracy Institute, an independent think tank, said that if he were to come with such a significant level of political power, it would pose a major challenge for Netanyahu.