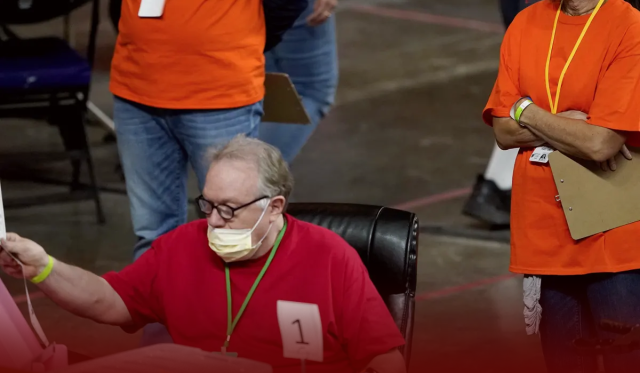 During this year’s consequential midterm elections, two counties in Western battleground states plan to manually count ballots – a sign that some parts of the country still distrust electronic vote tallying machines. Despite the objections of the county attorney, which claimed that the measure violated Arizona law, two Republicans on the three-member Cochise County Board of Supervisors on Wednesday voted to authorize a “hand-count audit” of all precincts.

Additionally, in neighboring Nevada, the top election official of rural Nye County announced that he would begin counting mail-in ballots later this week. The officials in both communities plan to tally the results using machines, but experts are concerned that the results may come out differently, further undermining public confidence in elections. In addition, it is widely believed that the results of hand-counting thousands of ballots are likely inaccurate.

“They are elevating an ineffective process,” said Alex Gulotta, Arizona state director of All Voting is Local. The director was among those who spoke out against Cochise County’s plan. There are several high-stakes gubernatorial and Senate contests in Nevada and Arizona in the upcoming midterm elections and important contests over the election’s chiefs of the two states.

A Test in Nevada with Hand Counting Ballots

Several counties in Nevada have begun counting ballots by hand in response to conspiracy theories regarding using voting machines to record and tally votes. Nye County has been among the first counties in the country to accomplish this. However, acting on an emergency petition filed by the American Civil Liberties Union of Nevada, county officials recently modified some of their plans for counting mail ballots after the Nevada Supreme Court imposed several restrictions on the county’s procedures.

By way of example, the ACLU argued in its lawsuit that the county’s proposal to hand count ballots, with volunteers reading the choices on each ballot aloud, could lead to the leaking of results before Election Day, in violation of state law. Nye County’s interim clerk, Mark Kampf, has informed CNN that voting counting will not be live-streamed. Furthermore, any member of the public observing the count in person must sign an agreement not to release information about early votes in advance of the announcement of the official results.

Mail-in ballots will be counted by hand beginning Wednesday and running through November 12, the date on which Nevada must receive mailed ballots. The work has been undertaken by 98 volunteers who have been trained and selected. Moreover, the number of registered voters in Nye County is approximately 33,000, and about 17,500 people voted in the midterm elections four years ago. “A hand count serves as a proof of concept that demonstrates first whether the process is feasible and second, whether it is accurate,” Kampf explained.

Just two weeks remain until Election Day in Cochise County, a community in the southeast of Arizona with approximately 87,000 registered voters. The board of supervisors approved a hand recount of ballots on Monday by a 2-1. In her remarks before the vote, Peggy Judd, one of the Republican supervisors, stated, “I do not see this – legal or illegal – as something that will affect our election process.” “I would like to take this opportunity.”

However, many details remain to be resolved regarding how the proposed audit would work, such as whether it would involve a hand count of all ballots and whether it might delay the county’s certification of the results. Kori Lorick, the state elections director, wrote to the county on Tuesday, assuring them that Arizona Secretary of State Katie Hobbs had “serious concerns” regarding the legality of the board’s decision. If the county attempted an expansive hand count, she warned the county it might be subject to legal action.

Arizona voters will have the opportunity to elect Hobbs as their Democratic candidate for governor. The Democratic candidate faces Republican Kari Lake, a conservative skeptic of former President Donald Trump winning the state in 2020. Lake and Mark Finchem, the Republican candidate who hopes to succeed Hobbs as secretary of state, filed an unsuccessful lawsuit earlier this year to ban the use of voting machines during elections.

Due to the time-consuming and arduous process of counting early ballots, Nye County wanted to begin counting early votes before Election Day. It would be risky for the county, which has approximately 33,000 registered voters, to wait until Election Day before performing a complete hand count. Several reports have indicated no widespread voting machine manipulation or fraud in the 2020 election, including in Nevada.

Nye County, a major U.S. county, has changed its vote-counting procedure in response to several conspiracy theories. The decision led to the resignation of the long-serving county clerk earlier this year. The interim county clerk, Mark Kampf, has described Nye County’s Dominion tabulator machines as a “stop-gap” measure while it determines how to handle future vote tallies.

Republicans’ nominee for secretary of state, Jim Marchant, has stated that hand-counting should be adopted in every county. During a meeting of the county commission in March, he expressed his intention to force Clark and Washoe counties — the home of Las Vegas and Reno — to adopt hand-counting. Throughout his campaign, he has made unsubstantiated claims about the electoral process and maintained that candidates are not elected but are “selected” by rigged electoral processes.