Home Updates No one Can Kill the Truth – Capital Gazette Shooting 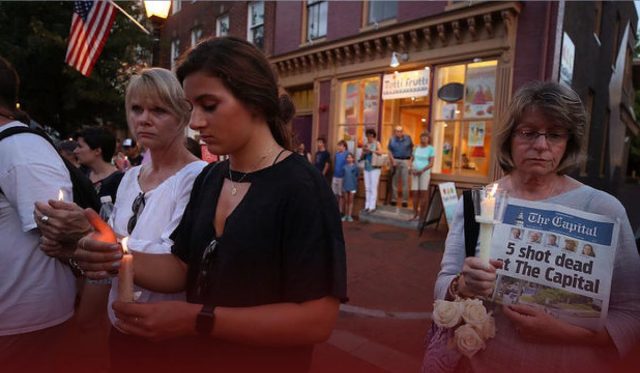 Survivors of the Capital Gazette shooting in 2018 that killed five people inside a Maryland newsroom shared a message for the shooter; “You can’t kill the truth.” On Tuesday, the court sentenced Jarrod Ramos to life in prison without the option of parole (conditional release) for his attack on the Capital Gazette office. Before his sentencing, family members and victims criticized the gunman in emotional victim impact statements.

The judge told the court that the killer deserved the punishment and earned his sentence. Former Gazette worker Selene San Felice said that the shooter killed five innocent people, but no one could ever kill this paper. However, Felice saves her life by hiding herself under her desk during the attack. She said that she lives to spread the truth.

NEW: The gunman who killed 5 people at the Capital Gazette news offices in June of 2018 has been sentenced to 5 life terms in prison.

A jury determined that Jarrod Ramos was criminally responsible for the deaths and rejected Ramos’ claims that he was not mentally competent.

Bad day, on 28th June 2018, the shooter armed with a shotgun and smoke grenades broke into the news office, obstructed exit ways, and opened fire as workers took cover under desks for the sake of their lives. According to the local police, it was a targeted attack, and he killed staff members such as Robert Hiaasen, John McNamara, Rebecca Smith, Wendi Winters, and Wendi Winters.

What was the reason behind the attack?

Nine years ago, 41-year-old Ramos unsuccessfully sued Capital Gazette for insult after publishing details of his 2011 guilty appeal for criminal harassment. Later, police would detail three letters Ramos sent out some days before the deadly attack, in which he warned to kill every employee in the Gazette newsroom. Furthermore, the state’s attorney for Anne Arundel County, Anne Colt Leitess, told the court on Tuesday that it was the killer’s ego that couldn’t handle his rejection.

Leitess also reminded the honorable court that Ramos showed regret for his actions and considered it his key regret in life that he didn’t kill the whole newsroom staff. The killer will serve consecutive life sentences for every murder, along with three hundred and forty-five more years in prison on assault and gun charges. Ramos pleaded guilty to his full twenty-three-count accusation in 2019, but his attorneys at the time claimed he couldn’t hold responsible for his activities because he was mentally ill.

At the end of the twelve-day trial, judges took less than two hours to decide that the killer should serve life in prison instead of a mental health facility. Judge Wachs said the impact of the current case is simply immense. Further, he added that to say the offender showed a cruel and heartless disregard for the sanctity of human life is an understatement.