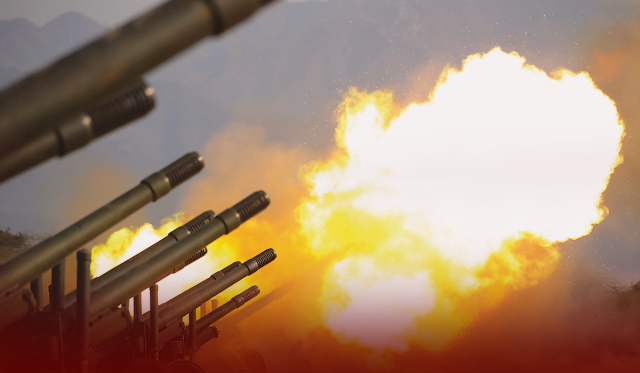 During annual defense drills to enhance South Korea’s ability to respond to Pyongyang’s missile and nuclear threat, North Korea has fired hundreds of artillery shells off its eastern and western coasts. It was reported by the Joint Chiefs of Staff of South Korea that North Korea launched several hundred rounds, beginning around noon on Wednesday, on both its eastern and western coasts.

Under an inter-Korean agreement established in 2018, the two Koreas established maritime buffer zones to reduce front-line animosities after the shells did not hit South Korean territorial waters. However, in its most significant direct violation of the 2018 agreement, North Korea shot hundreds of shells into the buffer zones last Friday in the second incident since then.

In a statement on Wednesday, the North Korean People’s Army stated that the shots were intended to communicate a “grave warning” to South Korea following its own artillery training earlier on Tuesday in a border region of the east. The government of Seoul has not yet confirmed whether any such firings have taken place. South Korea has conducted several military drills over the past few weeks, including joint exercises with Japan, the United States, and Hoguk, which are scheduled to conclude on Saturday.

The KPA General Staff reported that the South Korean military is conducting a frantic war drill against the North. KCNA said that the government ensured that KPA units on the east and west fronts fired threatening warning fire at the eastern and western seas on October 18 to send a grave warning. They must cease their reckless and inciting provocations that increase tension on the front lines as soon as possible.

Artillery tests conducted by North Korea attract less attention outside the country than missile launches. However, its forward-deployed long-range artillery guns pose a significant security threat to South Korea’s populated metropolitan areas, which are approximately 40 to 50 kilometers from the border with North Korea.

During the past few weeks, North Korea has conducted a series of weapons tests in response to its “dangerous military drills” involving US aircraft carriers. It describes these tests as simulations of nuclear strikes on South Korean and US targets. Washington and Seoul conduct regular military exercises viewed as rehearsals for invasions by Pyongyang. Since North Korea resumed missile testing on September 25, it has successfully tested fifteen missiles. The missiles flew over Japan and demonstrated a range of up to 1,000 miles, which would have been able to reach the United States territory of Guam in the Pacific Ocean.

On Tuesday, Tokyo targeted North Korea’s Ministry of Rocket Industry and four trading firms as part of additional sanctions imposed. “North Korea has continued to engage in a pattern of provocative acts with great frequency this year, including the firing of 23 ballistic missiles that have been launched,” Japanese Foreign Minister Yoshimasa Hayashi said during his announcement of the new measures.

The actions of Pyongyang were “violent” and “totally unacceptable,” the president stated. A blacklist was issued on Friday by South Korea targeting fifteen North Korean individuals and sixteen institutions involved in missile development for the first time in nearly five years. Several foreign experts believe that Kim Jong Un will one day try to use his expanded weapons arsenal to influence the US and others to agree to accept North Korea as a legitimate nuclear state and lift the economic sanctions imposed on it.