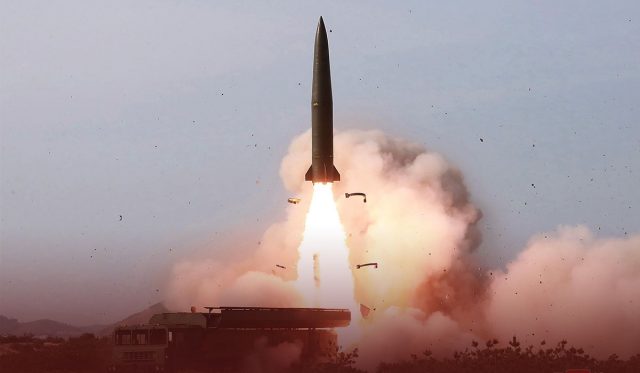 The Joint Chiefs of Staff (JCS) confirmed that North Korea fired two ballistic missiles into the sea off its eastern seashore on Wednesday afternoon. The launch comes two days after the country claimed to test a newly developed missile in a recommencement of its weapons displays after a six-month silence. JCS said that they launched missiles from central North Korea. On the other hand, the coast guard of Japan said that the missiles landed outside the Exclusive Economic Zone of Japan in the sea between the Korean Peninsula and Japan.

Seoul further added that the United States and South Korean intelligence officials are investigating further details about the launches from North Korea. The joint chief’s statement said that South Korea enhanced its anti-surveillance posture of North Korea. Yoshihide Suga, the Prime Minister of Japan, said the missiles landed outside the Exclusive Economic Zone of Japan in the sea between the Korean Peninsula and northwestern Japan. Suga further added that the firings threaten the safety and peace of Japan and the whole region and are definitely disgraceful.

He said that the administration of Japan is resolute to intensify its surveillance and vigilance further to get ready for any eventualities. The coast guard of Japan said no aircraft or ships reported damage because of the recent missiles launches from North Korea. On Monday, North Korea said that it tested twice a recently developed cruise missile over the weekend. The state media of North Korea described the launching of the missiles as a strategic weapon of great significance, intending to arm the country with nuclear warheads.

Deadlock in Nuclear Diplomacy between Washington and Pyongyang

According to the accounts of North Korea, the missile flew around fifteen hundred kilometers (nine hundred and thirty miles), a distance putting all of the United States and Japan military installations there within reach. Several experts say the weekend missile tests suggested the country is pushing to strengthen its weapons arsenal because of a deadlock in nuclear diplomacy between the United States and North Korea.

Wang Yi, the Chinese Foreign Minister, was in Seoul, the capital of South Korea, for meetings with its president Moon Jae-in and other senior officials to discuss the delayed nuclear diplomacy with North Korea. It is uncommon for North Korea to make challenging launches when China, its main ally and aid provider, engaged in a key diplomatic event.

According to Moon’s office, Moon told Wang that he appreciates the Chinese role in the global diplomatic move to resolve the nuclear deadlock of North Korea and asked for continuous Chinese support of such efforts. However, Wang requested additional development in mutual relations between China and North Korea. Moon’s office further said that the government plans to hold a meeting of an unscheduled National Security Council.

Moreover, the nuclear diplomacy between Seoul and Washington stuck since 2019, when the U.S. rejected the demand of North Korea for significant sanctions ease in return for demolishing an aging nuclear facility. So far, the Kim government warned to build high-tech weapons targeting the U.S. and rejected the offer of the Biden government for dialogue, demanding the U.S. wildness its aggressive policies first.

Read Also: North Korea warned US of Crisis Beyond Control