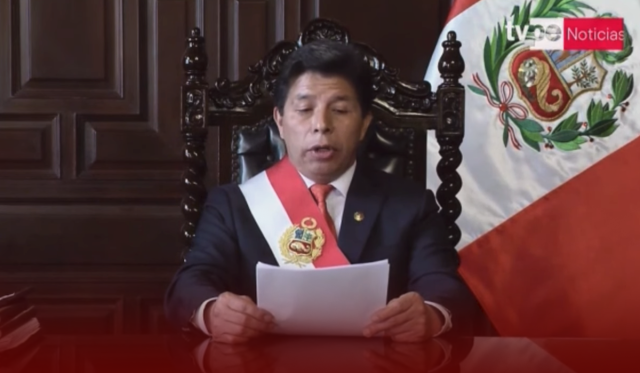 On Thursday, a Peruvian judge imposed an 18-month jail sentence on former President Pedro Castillo as countrywide protests sparked by the political crisis continued to spread across the nation, and at least 14 people were killed. Castillo, a former leftist schoolteacher of humble origin, enjoyed the support of impoverished Andean regions, who supported Castillo, who declared a police state one day after the government announced a police state.

Former Peruvian President Pedro Castillo was ordered to be imprisoned for 18 months by a Peruvian judge as the authorities continued to make their case against him based on accusations of “rebellion” and “conspiracy” in a decision to escalate the political turmoil and protests. pic.twitter.com/pSeQaLZ3T3

Following the ouster of the political novice whose surprise election last year was met with immediate opposition from the political establishment, thousands of his loyal supporters have taken to the streets to demonstrate their support. According to the Ministry of Health, four people are still hospitalized due to injuries suffered during the civil unrest. After Castillo attempted to dissolve Congress before a third impeachment vote, lawmakers removed him from power last week, leading to protests. During the current crisis, the country, which has faced six presidents in three years, has become even more unstable.

Judge Juan Carlos Checkley Soria has issued a court ruling because Congress strips Castillo of the privilege that protects Peru’s presidents from being prosecuted criminally. Castillo, whom a public defender represented, said he would appeal the judge’s decision. He refused to participate in Thursday’s virtual hearing because it lacked “minimum guarantees.” Castillo is expected to spend at least ten years in prison for rebellion, according to Peruvian Supreme Prosecutor Alcides Chinchay during his court appearance on Thursday. In the meantime, on Thursday evening, many protesters gathered in central Lima – alongside police in riot gear.

Additionally, government officials have imposed a curfew in 15 communities from dusk to dark for the next five days in accordance with Wednesday’s nationwide emergency declaration. In addition to Castillo’s freedom, the protesters demanded the resignation of former President Dina Boluarte and the immediate holding of general elections to elect a new leader and members of Congress. Furthermore, several police stations have been burned, an airstrip used by the armed forces has been seized, and a runway at the Arequipa airport has been invaded, a gateway to some of Peru’s premier tourist attractions.

The protests have adversely affected thousands of tourists. Additionally, Machu Picchu remains closed due to roadblocks along the Pan-American Highway, resulting in food spoilage on the way to the capital due to the delay of the passenger train. On Thursday, thousands of travelers were stuck at Cusco’s hotels and airport, a top tourist destination. The protests have caused all flights to be canceled, and I was supposed to return to Ecuador on Monday,” said Karen Marcillo, 28, who is sleeping at the Teniente Alejandro Velasco Astete airport.

Because of the pandemic on tourism, Peru was only able to attract 400,000 tourists last year, down from 4.4 million in 2019. His tenure in office was marked by opposition from a Congress hostile to his presidency, as well as several investigations that ranged from corruption to plagiarism investigations. However, it remains to be seen whether Boluarte, once his running mate and vice president, will be allowed to serve as president. It is like Castillo’s position that she is a new entrant to politics without a congressional base.

The political science professor who has studied Peru extensively at George Washington University, Cynthia McClintock, commented, “She’s doing a good job right now.” However, she noted that the task is challenging. The ouster of Castillo provided some protesters with an opportunity to express simmering grievances, such as deep inequalities, poverty, and insufficient public services. “Some seem intent on causing instability at any cost,” McClintock said.

Legislators seeking to maintain their positions may give Boluarte some breathing room. But, as the protesters’ advocate, it would be impossible for them to seek re-election, and they would be left without a job if a general election for Congress were held. Boluarte formally proposed a date for general elections for December 2023 to Congress. A few days ago, she proposed a July 2023 date to Congress. She has since claimed that this would be four months earlier.

Castillo, who comes from a poor Andean Mountain district, has no prior political experience and has been associated with rural, impoverished areas outside Lima that are strongholds for the protest movement. The government has approved using the military to maintain public order in Andahuaylas, where four people appear to have died due to the demonstrations. Although the government declared that the military would assist in maintaining public order, there were no soldiers on the streets on Thursday.

Some grocery store owners have already begun clearing roads littered with rocks and burned tires, despite plans to close their doors in the face of protests led by residents of nearby rural communities. In July 2021, Castillo was elected to Congress, and lawmakers are now attempting to impeach him for the third time since his election. The vehicle carrying Castillo’s security detail was intercepted as he traveled through the streets of Lima after Congress voted him out of office.

Assertions that Castillo poses a flight risk were rejected by his public defender, Italo Díaz. When he was released, he told Judge Castillo that his children and wife relied on him and that if released, he would be able to return to the teaching profession. A detention facility built for presidents is housed within a National Police facility, where Castillo is being held. While dozens of Castillo supporters gathered outside the facility on Thursday, police in riot gear stood outside.

In a state of emergency, the police, assisted by the military, are empowered to search people’s houses without permission or judicial order. However, these powers are suspended in accordance with the declaration of a state of emergency. Defense minister Luis Otarola Pearanda announced that the council had approved the ministers’ statement. While demonstrations against Boluarte and Congress continued Wednesday, she appealed for calm. The Peruvian population cannot be overrun with blood, she stated.