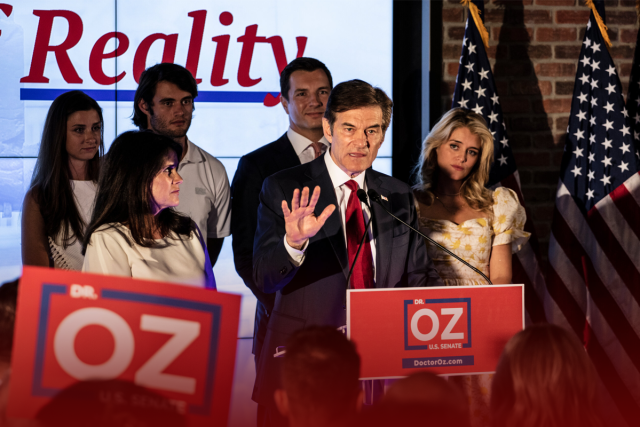 Democrats and Republicans are still hoping to gain a narrow majority in the House of Representatives, while the Senate race comes down to three key races. During the first hour of voting, Republicans were able to rout Democrats in Florida, where Governor Ron DeSantis won Latino heavily, historically Democratic areas, setting up a possible presidential bid for 2024. Nevertheless, Democrats gained ground in the hours that followed.

The House and Senate remain in limbo, with three key races determining the outcome of the Senate, while both Democrats and Republicans are still hoping to secure a narrow majority in the Senate.#2022Midterms #Midterms2022results #Republicans #Democrats #MidtermElections2022 pic.twitter.com/D3wBVFs3cX

For the seat of retiring GOP Senator Pat Toomey in Pennsylvania, Democratic Lieutenant Governor John Fetterman defeated GOP Mehmet Oz. However, despite high inflation, historical trends, and friendly new districts following 2021’s redistricting, Republicans remain in the battle for the House majority. Here below, we will discuss some of the takeaways of these midterms as votes are still being counted in significant states.

Democrats are Facing Difficulties in Protecting Their Senate Majority

In Pennsylvania’s Senate race, Republicans did not mince words: “We have to win this race.” “We believe that if we win Pennsylvania, in the Senate, we are likely to win a majority,” said Steven Law, president of the leading Republican Senate super PAC. CNN predicted on Wednesday morning that Fetterman would win the election for senator from Pennsylvania, defeating Oz in a high-stakes and one of the most expensive Senate campaigns in history.

Democratic supporters celebrated Fetterman’s victory with a thunderclap. The race has long been regarded as the most promising opportunity for the Democratic Party to gain a Senate seat in 2022. However, Fetterman’s near-fatal stroke earlier this year and his continued recovery in the public eye have cast uncertainty over the outcome. However, the Maryland lieutenant governor gave Democrats an edge next year in regaining Senate majorities.

If Fetterman wins, it becomes virtually impossible for the Republicans to win a majority. A Democratic operative in Western Pennsylvania, Mike Mikus, referred to Pennsylvania as the firewall. On Tuesday, CNN projected one Democratic incumbent as winning, despite several key Senate races remaining undeclared, including races in Nevada, Arizona, and Georgia, which will go to a runoff. Despite facing a Republican retired Army Brig. Gen. Don Bolduc and Maggie Hassan won her race against the Republicans.

If Hassan had lost, Democrats’ chances of retaining power would have been effectively ended. In Wisconsin, CNN predicted Republican Senator Ron Johnson would retain his seat. However, the Democrats are still defending their seats in Arizona, Nevada, and Georgia, so Senate control will not be settled for some time.

It was a particularly challenging night for the former president, among the most involved Republicans in these midterm elections. In an interview on CNN on Wednesday morning, a Trump adviser who has been in direct contact with Trump’s inner circle told CNN that Trump is “livid” and “screaming at everyone.” Among Trump’s most disappointing losses was the loss of Oz to Fetterman in Pennsylvania, where it was the most expensive Senate race in the country.

Following Trump’s endorsement during the contentious Republican primary, Oz overcame a brutal primary and made it into the general election by a narrow margin. However, where the backing of the former president was crucial in the primary, in the general election, it was an albatross for a Republican Senate candidate trying to gain traction in the suburbs by presenting himself as a moderate.

Despite Trump’s success in gaining Senate seats in Ohio and North Carolina – where he backed Republican JD Vance over Democrat Tim Ryan – those victories have been restricted to Republican states. For example, a Republican defeated Ted Budd in North Carolina over Democrat Cheri Beasley. The Republican Party also lost several seats in the House of Representatives, as some former president’s acolytes lost in what was seen as competitive contests that Republicans were expected to win to gain a significant majority in Congress.

Karoline Leavitt, a former aide to President Trump, lost to Democratic Rep. Chris Pappas in what was considered a highly competitive election. It has been widely reported that former president Trump’s support for Republican Bo Hines resulted in the loss of his election to Democrat Wiley Nickel in a race widely seen as a test of his influence. Emilia Sykes, a Democratic state representative from Ohio, defeated Republican Madison Gesiotto Gilbert, who boasted about her affiliation with the Trump campaign.

CNN forecasted that Elaine Luria, the Democratic representative from Virginia Beach and an investigator on the attack on the Capitol for the House select committee on January 6, 2021, would lose her congressional seat. But, in failing to Kiggans, a Republican Navy veteran, Luria demonstrated that the insurrection remains a political anchor for those concerned – even if it illuminates a dark chapter in the nation’s capital.

Furthermore, Luria provided the latest evidence that voters have not rewarded the insurrection committee. Democrat Stephanie Murphy of Florida and Republican Adam Kinzinger of Illinois quit their jobs rather than run for re-election. Republican Liz Cheney of Wyoming lost the primary to Trump-backed challenger Harriet Hageman.

CNN projected Wes Moore to win the Maryland governor’s seat and Maura Healey to win the Massachusetts governor’s seat, both currently held by Republicans. In Minnesota, Michigan, Wisconsin, and New Mexico, as well as others, Democratic governors are expected to keep their seats. In a seat where Democratic governor Tom Wolf had a term limit, Democratic candidate Josh Shapiro defeated Republican Doug Mastriano. Democrats will likely be able to strengthen their grip on governor’s offices in various states as Tuesday turns into Wednesday.

It was reported on Wednesday morning by CNN that Kansas Democratic Governor Laura Kelly will be re-elected, while Democrats remain competitive in Oregon and Nevada, two states that would fall under Democratic control, and Arizona, which could fall under Democratic control. However, despite the night’s accomplishments, Democrats are far from unmitigated winners. So how the three key races are decided could dramatically impact how they perceive their gubernatorial success.

Several swing states are likely to undergo significant changes in the political landscape because of Trump’s inroads among Latino voters in 2020. Early results in Miami-Dade County, a county with a large Cuban population, indicate that the Republican Party has continued to make gains. However, Latinos do not make up a monolith, and DeSantis also won other important votes in Florida. For example, Osceola County, a predominantly Latino County south of Orlando with a substantial Puerto Rican population, was another traditional Democratic stronghold won by DeSantis.

There is, however, some uncertainty as to whether the gains of the GOP are being realized outside Florida. Rio Grande Valley in Texas was one of the key indicators, where three House races were at stake in heavily Latino areas. Based on CNN’s projections, the Democratic Party has won two of these races. The 28th District is represented by Representative Henry Cuellar, the only Democrat in the House who votes against abortion rights. Meanwhile, a Republican candidate, Mayra Flores, has lost her election in the McAllen-based 34th District to Democrat Vicente Gonzalez.