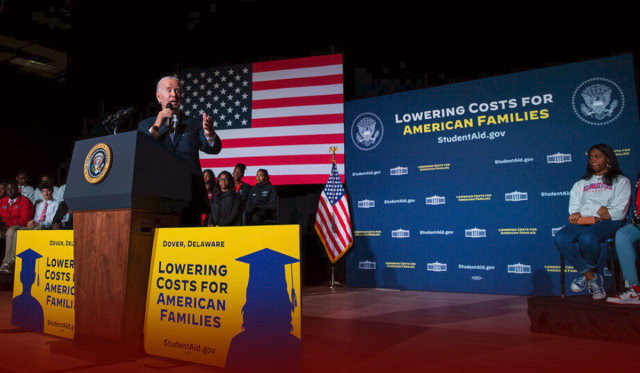 In a second lawsuit challenging the White House’s student loan forgiveness policy, the Biden government requested the United States Supreme Court to take up the case – a move that will not result in automatic reinstatement of student debt relief but will make it possible to start the program sooner than expected. During the Biden Administration, the United States Department of Education v. Brown case was brought before the courts, which prevented the implementation of a federal judge’s decision to eliminate student loans.

On Friday, his administration asked the Supreme Court to suspend a judge’s ruling in a separate case that found the program unenforceable, just after the court agreed to hear arguments over the legality of Biden’s plan to erase billions of dollars in student debt.#StudentDebt pic.twitter.com/uwbBaqDZJ4

Several individual borrowers brought the suit, alleging that the White House improperly implemented the program by not providing a public comment period. US District Judge Mark Pittman, a Trump appointee, overturned the policy in response to the decision, stating that the Biden Administration exceeded its authority in implementing the program. The Biden Administration argued this decision to be a profound error because the judge relied on legal arguments not presented in the original lawsuit when deciding to uphold the policy.

Following the 5th Circuit of Appeals’ ruling, the Biden Government appealed to the Supreme Court to prevent the loan forgiveness program from taking effect until the Court issues a final decision. A request by the Biden Administration is that Pittman’s ruling is paused immediately, thereby enabling relief of student loans to begin during the appeal process, or else that the case is heard concurrently with Biden v. Nebraska. The Court is scheduled to hear the second lawsuit in February against student loan forgiveness brought by Republican-led states.

Pittman’s ruling will not go into effect immediately if the Supreme Court prolongs it during the appeal process since the White House needs favorable judgments in both Nebraska and this case to reinstate debt forgiveness. However, the Nebraska case could be resolved by June at the latest, allowing debt relief to take effect sooner rather than after the entire appeals process is completed.

The Biden government argued to the Supreme Court that the rulings against student loan forgiveness provide vulnerable borrowers with untenable limbo. In general, eligible borrowers are told that meaningful debt relief is available… However, due to these rulings, borrowers who are most likely to default if their payment obligations continue without some relief face lengthy uncertainty regarding the scope of their payment obligations and the timing of those obligations.

Though the Court’s ruling in the other student loan forgiveness policy came relatively quickly, it is still being determined when they will rule on the current case. Considering that the Supreme Court has decided to hear both the Brown and Nebraska cases together, it is likely that the Supreme Court will have reached a final ruling on student loan forgiveness by June, which will either block it permanently or permit it to take effect permanently. After the Biden Administration extended the moratorium on payments after the loan forgiveness decision, the moratorium on repayments is expected to end on June 30.

Approximately 26 million borrowers applied for loan forgiveness before the suspension of applications on November 11, representing more than half of the 43 million eligible borrowers. Earlier this year, the Biden Administration announced that if a student borrower makes less than $125,000, $10,000 in student loans owed to the federal government will be forgiven, and $20,000 will be forgiven for Pell Grant recipients—an announcement that has drawn widespread criticism from Republicans and a slew of litigation. However, many borrowers have praised the decision.

In its lawsuit, Conservative Job Creators Network argues in favor of two borrowers, one of whom has a commercial loan and is therefore ineligible for forgiveness, and one who is not a Pell Grant recipient and is thus entitled to only $10,000 in relief. Using the argument that the policy was “irrationally, arbitrary, and unfair” in excluding them from some loan forgiveness, the plaintiffs argued that a public comment period should have been required. However, Pittman dismissed the lawsuit without explanation, stating that Congress should have been responsible for determining whether to suspend the policy and that the Biden Administration was not justified in forgiving debt considering the federal law cited in the lawsuit.

Pittman’s ruling in Pittman’s case did not grant the plaintiffs any relief because they can still not comment on the program, now that it has been blocked, in the Biden Administration’s submission to the Supreme Court. Biden Administration officials claim that the result of the decision makes the plaintiff “worse off than before” since he will not receive the proposed $10,000, nor the requested $20,000, but nothing at all.