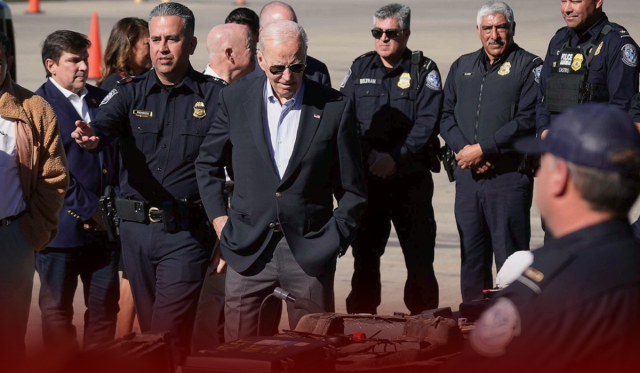 President Biden’s visit to the US-Mexico border follows the announcement of a new policy addressing the increase in undocumented crossings. President Biden’s handling of the border crisis draws criticism from both sides, with Republicans claiming leniency and advocacy groups raising concerns about risks to asylum seekers. While en route to Mexico to meet with President Andres Manuel Lopez Obrador and Canadian Prime Minister Justin Trudeau for a summit in Mexico City, President Biden made a stop in El Paso, Texas.

During his visit to Texas, President Biden met with border agents at the Bridge of the Americas in El Paso, which connects the city to Ciudad Juarez in Mexico and is one of the busiest ports of entry between the two countries. He assured reporters that the agents would be receiving the necessary resources for their work. “They need a lot of resources. We’re going to get it for them,” he said.

While in El Paso, U.S. President Biden observed border officers as they demonstrated their vehicle search procedures for drugs, money, and other contraband. He also inspected a portion of the border fencing between El Paso and Ciudad Juarez. Upon President Biden’s arrival in Texas, Republican Governor Greg Abbott presented him with a letter blaming the current “chaos” at the border on the President’s failure to enforce federal laws. The gesture reflects the ongoing political tensions surrounding immigration.

During a press conference last week, Biden announced new immigration policies that he expects would significantly decrease the number of individuals attempting to cross the southern border. Under the new rules, a program has been established that allows up to thirty thousand Cuban, Haitian, Nicaraguan, and Venezuelan nationals to legally enter the US each month and receive two-year work permits if they have sponsors in the US and pass background checks.

Under the policy, U.S. authorities have the authority to expel individuals from these four countries who cross the border irregularly to Mexico and deny them access to the program. The Biden administration has stated that Mexico has agreed to accept thirty thousand expelled individuals from these countries each month. According to rights groups, this policy is harmful to individuals who have no other option but to cross the border irregularly to seek asylum.

They argue that the policy is an extension of the Title 42 measures implemented during the Trump administration, which allowed authorities to swiftly expel adult asylum seekers at the border citing Coronavirus health concerns. A federal judge in the US ordered an end to Title 42 in November after a lengthy legal battle, but the Supreme Court agreed to hear a case brought by Republican-led states challenging the decision, leaving the policy in place for the time being.