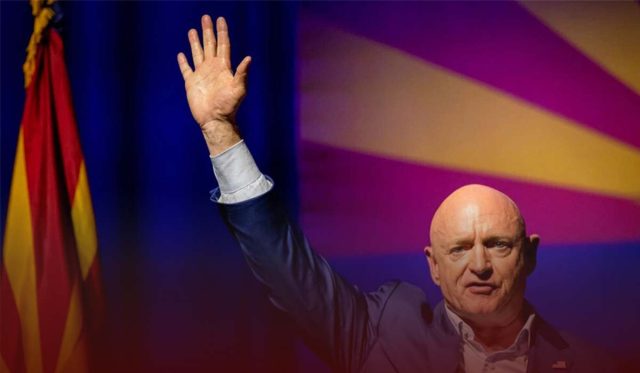 Democratic Senator Mark Kelly won his reelection bid on Friday in Arizona, the pivotal swing state, by defeating GOP venture capitalist Blake Masters. This victory puts the Democrats one seat away from securing a majority in the chamber for the coming two years under President Joe Biden. However, with the assistance of Vice President Kamala Harris’ tiebreaking vote, Democratic senators can regain control of the Senate if they win either the Nevada race, which is still too close to call, or next month’s Georgia runoff.

Senator Mark Kelly won reelection to the Senate, defeating conservative Republican Blake Masters in the swing state of Arizona. Kelly’s victory puts the Democrats one victory away from securing control of the chamber for Biden’s remaining two years in office.#Midterms2022results pic.twitter.com/RbsEIZMJba

The Republicans must win both races to control the House of Representatives. In their attempt to control the 50-50 Senate, Republicans targeted several races, including the Arizona race. Having made inroads in a state previously dominated by the Republican Party, Kelly and other Democrats saw this election as a test of their progress. The victory of Kelly indicates that Democratic success in Arizona during the presidency of Donald Trump was not an anomaly.

Even with President Joe Biden’s late-night campaign swing on their behalf, Democratic Representatives Katie Porter and Mike Levin were locked in tight races in Southern California. Only about a third of the expected votes tallied when it was time for Republican Representative Ken Calvert to face Democrat Will Rollins east of Los Angeles. Most of the ballots have not yet been tabulated in the Central Valley race between Republican Representative David Valadao and Democrat Rudy Salas. Valadao voted to impeach then-President Donald Trump.

Levin was in a tight race with Republican Brian Maryott in a San Diego County district where pocketbook concerns were a primary concern for voters. In the weeks before election day, Biden campaigned on his behalf. The California Republican Party believed that as many as five House districts in the state would swing in their favor. It would be sufficient to give the GOP the House gavel when voters typically punish the governing party when midterm elections are being held.

Speaker Nancy Pelosi of San Francisco is expected to be replaced by Republican Representative Kevin McCarthy of Bakersfield. In 2020, the Democrats lost four seats in the state congressional delegation, which they were hoping to regain and increase their dominance. The Republican party holds eleven of the 53 seats in the legislature in California, a number that will decrease to 52 seats next year as the state’s once-soaring population growth has stabilized.

In the 13th district of the Central Valley – which is heavily populated by Latinos and has a strong Democratic tilt – one of the closest fights was for an open seat. Working-class voters, including many Latinos, tend to be less likely to vote consistently than white, older, wealthy homeowners. So a close race was fought between Democrat Adam Gray and GOP John Duarte. Rep. Mike Garcia won his third consecutive election in a district with a Democratic lean north of Los Angeles by 15 points over Democrat Christy Smith. Garcia won the last two races.

Kelly Campaign as an Independent-minded Democrat

In his campaign ads, Kelly attempted to convey a sense of distance from Biden on the border issue to strengthen his brand as an independent-minded Democrat. In his first advertisement, he describes his upbringing as the son of two police officers as an example of the economic hardship caused by inflation. Moreover, in a statement released Friday after the race was called, Kelly said, “From the beginning, this campaign has been about bringing together Arizonans – Democrats, Independents, and Republicans – who are united in their belief that by working together, our important challenges can be overcome.”

In Georgia, Senate Senator Raphael Warnock (D) won the Democratic primary over former NFL player Herschel Walker (R). However, both candidates failed to obtain the 50 percent threshold needed to avoid a runoff. Meanwhile, in Arizona, Democrat Adrian Fontes was projected to defeat GOP Mark Finchem in the fight for secretary of state. Finchem was a far-right state lawmaker who attempted to undermine and unconstitutionally decertify results from the 2020 presidential election.

Several Republican candidates for secretary of state ran campaigns based on Trump’s false claims that the 2020 election had been rigged. Finchem was one of those candidates. A successful election would have put him in charge of a battleground state’s electoral affairs in 2024 if he had been elected. Instead, the state secretary certifies the results for the entire state. Immediately following the announcement of his race, Fontes said that Republicans and independents are interested in the truth. It is well known that they do not want to hear lies from us.

There is uncertainty about the outcome of key races as votes are still counted. Thad Kousser, a prof of political science at the University of California San Diego, said they need to know whether California is a political bellwether or an island. The red ripple across the country would turn into a blue counter-ripple if Democrats could hold the seats of Levin, Porter, and ouster Calvert.

On Election Day, California generally adhered to its liberal inclinations. It was a triumphant year for Democratic leaders in California, with Governor Gavin Newsom and US Senator Alex Padilla easily re-elected, the state constitution was enshrined with abortion rights, and the legislature remained firmly controlled by Democrats. Until 2006, when Arnold Schwarzenegger was re-elected governor, a Republican had not won one of those races in California.

Possible changes in the political landscape mirror the national political landscape, which did not result in the Republican wave that was predicted to sweep Congress into solid Republican control. Senate control will hinge on close races in Arizona, Nevada, and Georgia, with Republicans appearing to be on the verge of gaining a slim majority in the House. It would be devastating if Porter lost after spending more than $24 million to win a third term.

The candidate is regarded as a rising contender of the party’s progressive wing, a prolific fundraiser with a strong national following, and frequently suggested as a potential US Senate candidate. However, her standing was virtually tied with Republican Scott Baugh after about half the votes had been counted, who had relentlessly attacked her over soaring gas prices and rising grocery prices in her conservative coastal district.