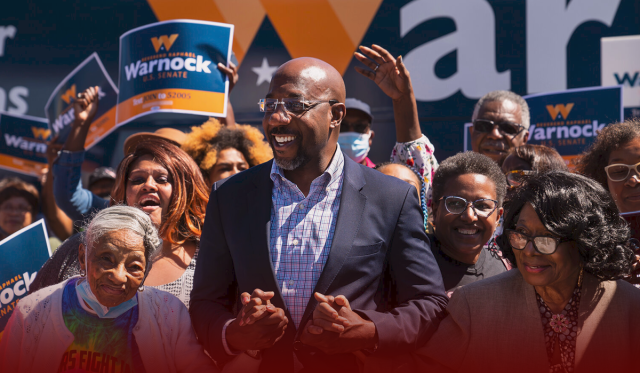 A Georgia runoff election on Tuesday resulted in Democratic Senator Raphael Warnock defeating Republican challenger Herschel Walker, ensuring Democrats a majority in the Senate for the remaining Biden’s term while capping off the Republicans’ underwhelming midterm election cycle. In the Senate, Democrats will have a 51-49 majority following Warnock’s second runoff victory in the last two years, gaining one seat from the current 50-50 split achieved by John Fetterman’s victory in Pennsylvania.

A hard-fought runoff election on Tuesday in Georgia resulted in Democrat Raphael Warnock winning reelection to the US Senate, strengthening his party majority in the Senate.#GeorgiaRunoff #RaphaelWarnock #GeorgiaSenateRunoff #Democrats #Senate #SenateRunoff #WarnockDelivers pic.twitter.com/ucJjLH76HS

The House has narrowly flipped over to Republican control, however, so there will be a divided government. “Following a brutally hard-fought campaign, I am grateful for the opportunity to share the four words that make a democracy remarkable: the people have spoken,” Warnock, 53, told thousands of cheering supporters gathered in a downtown Atlanta hotel ballroom. Frequently, voting allows us to pray for the world where we wish to live and raise our families,” says Warnock, a Baptist minister and the first Black senator from his state.

I want to acknowledge that you have prayed with your lips, hands, feet, heads, legs, arms, and hearts. Finally, having put in the hard work, we have reached a point where we can stand together.” After almost four million ballots were cast, Warnock defeated Walker by approximately 37,000 votes, but he failed to reach the fifty percent threshold to avoid a runoff.

Georgia as a Battleground

In the runoff on Tuesday, the senator appeared to be on the verge of winning by a wider margin, as Walker, a football legend from the University of Georgia and the NFL, was unable to overcome several damaging allegations, including he was accused of paying for the abortions of two ex-girlfriends even though he supported a national ban. In a speech delivered late Tuesday in downtown Atlanta at the College Football Hall of Fame, Walker, a close ally and friend of Trump, said: “The numbers do not add up.”

No excuses can be made in life, and I will not make any excuses at this point because we fought hard for what we believe we deserve. Two years after Warnock, the Democrats’ Georgia victory solidified Georgia as a battleground in the Deep South, and two months after President Biden became the first Democratic presidential contender to win Georgia in 30 years, fellow Georgia Democrat Jon Ossoff won runoff elections in 2021 that gave the party Senate control.

Warnock was re-elected to the Senate by Republicans in the same election cycle that awarded an all-GOP slate of statewide constitutional officers and re-elected Republican Gov. Brian Kemp by a wide margin. A blow to former President Trump as he moves towards his third White House bid in 2024, Walker’s defeat highlights the GOP’s continuing struggles to succeed this year with flawed candidates cast in Trump’s mold. Moreover, by gaining the majority in the Senate, Democrats can negotiate a power-sharing agreement with Republicans and will no longer rely so heavily on Vice President Kamala Harris to break ties.

The Democratic Party celebrated Tuesday, with President Biden tweeting a picture of his telephone call congratulating Senator Sanders. It was great to see the Georgia voters standing up for our democracy, rejecting Ultra MAGAism, and returning a good man to the Senate,” President Biden tweeted, referring to President Trump’s slogan “Make America Great Again.”

In the runoff election, around 1.9 million mail-in and early-voting ballots were cast in Georgia. A strong turnout on Election Day contributed approximately 1.4 million more votes, slightly above the results of November 2020. However, the turnout was still lower than the 2021 runoff, with about 4.5 million voters. In addition, after the 2020 election, changes made by state legislators shortened the runoff period from nine weeks to one month, resulting in a decline in the number of early and mail-in ballots.

In his remarks, Warnock emphasized his ability to work across party lines and his values, which he has attributed to his experience as a senior pastor at Ebenezer Baptist Church, where Luther King Jr. once preached. Although Walker enjoyed unmatched name recognition during the election campaign due to his football career, questions regarding his suitability for office did not cease to plague him throughout the campaign.

A multimillionaire entrepreneur faced questions about his past, including exaggerations about his academic credentials, business accomplishments, and philanthropic activities. In addition, Walker faced new scrutiny regarding his ex-wife’s allegations of domestic violence, including allegations that he threatened to kill her and once held a firearm to her head. It is important to note that he has never denied these specifics and reported his violent tendencies in a memoir written in 2008, in which he attributed them to a mental disorder.

He sometimes muddled policy discussions as a candidate, including a claim that “bad air” from China has overtaken “good air” from the U.S. and a claim that diabetics can maintain their health by eating well, which is not enough for insulin-dependent diabetic patients. Tom Callaway, a voter from Atlanta, praised the GOP’s strength in Georgia and expressed his support for Kemp during the first round of voting. However, he stated that he voted for Warnock because he felt that Herschel Walker did not possess the qualifications necessary to be a senator.

On the other hand, Walker sought to portray Warnock as a willing accomplice to Biden. Warnock sometimes faced a personal attack from the challenger, in which he accused Warnock of “begging” at the White House – an extremely salient charge to level against a Black senator regarding the senator’s relationship with a white president. In addition to touting his Senate accomplishments, Warnock also advertised his sponsoring of a provision that would cap insulin costs to Medicare beneficiaries.