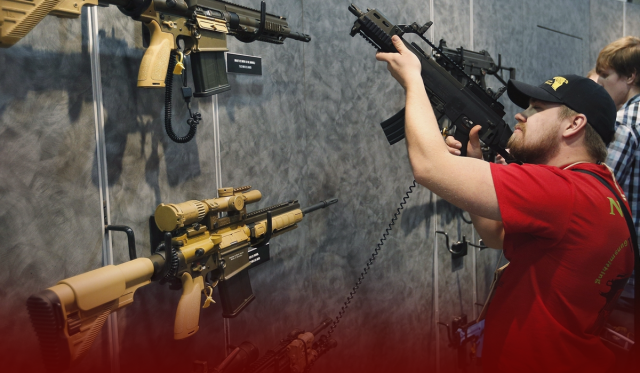 Following the latest round of mass shootings, Democrats are calling for a ban on assault weapons, warning that the window for enacting legislation is closing soon, with Republicans expected to take control of the House in January. At least eighteen people were injured in the gun shooting at Club Q in Colorado Springs on November 19, in which a shooter with an AR-15-style rifle and a handgun opened fire, killing five people and injuring another five.

Following the recent spate of mass shootings, Democratic leaders are calling for an assault weapons ban, warning that it may be too late to enact legislation once the Republicans take control of the House in January.#GUNviolence #GunControlNow #DemocraticParty #Republicans pic.twitter.com/6aNBdNaQip

Later that day, a Walmart supervisor in Chesapeake, Va., killed six employees in the store’s break room with a handgun he had purchased that morning before committing suicide. Several other recent horrors have also initiated a review of the ease at which assault weapons can be obtained, including the shooting deaths of nineteen students and two teachers in Uvalde, Texas after a gunman purchased weapons and hundreds of rounds of ammunition shortly after turning 18, just days after his 18th birthday.

United States President Joe Biden has announced that he will intensify his efforts throughout the lame-duck session of Congress to ban assault weapons and high-capacity magazines. It is sickening that we remain a society that permits the purchase of semiautomatic weapons. In an interview with reporters on Thanksgiving, Biden stated, “I just feel sick.” He further said, “It does not have any socially redeeming value. There is none. None. This policy cannot be justified by any rationale other than profit for gun manufacturers.”

Renew the Ban on Assault Weapons

Senator Chris Murphy, a Democrat from Connecticut, stated on Sunday that Democrats do not have the 60 votes necessary to override a filibuster and pass legislation extending the ban on assault weapons passed by the House last July. While he expressed gratitude to Biden for prompting them to take a vote, he expressed concern about the outcome.

Is there a 60-vote majority in the Senate now? Most likely not. Murphy said on CNN‘s “State of the Union” that the goal should be for the close to be as sixty as possible. The red-flag law in Colorado has been under scrutiny since the shooting at Club Q as questions have been raised regarding how the law has been enforced. The law allows authorities to remove guns from people they deem extremely dangerous.

He has blamed the county where the Club Q shooting occurred for its failures and called on lawmakers to consider preventing federal funds from being distributed to law enforcement agencies that deny executing gun laws. Governor Jared Polis (D) of Colorado stated on Sunday that he would “take a close look” at why the red-flag law was not used in this case. It comes amid reports that the suspect last year made a bomb threat against a family member.

Polis said on CBS’s “Face the Nation” that he was aware of a case when the method might have been employed. However, the mother chose not to pursue it. It is also possible to have the local sheriff’s department handle the matter. Unfortunately, the local sheriff’s department failed to pursue this case. I am confident that the reason why it was not followed will be investigated.

Additionally, Polis suggested that Colorado should better publicize the law and explore making extreme risk protection orders available to a broader range of individuals. However, the state of Colorado has no background checks, making it easier for someone convicted of a felony in Colorado to purchase a weapon from the state and return it within an hour after purchasing it. The president urged federal legislators to consider instituting additional licenses or background checks for some of the world’s most potent weapons.

“A national response is also needed,” Polis said on NBC’s “Meet the Press.” “If you are serious about reducing the number of gun violence and mass violence incidents, please use the best ideas from all sides that work.” In his remarks, Murphy stressed that the bill currently before the Senate would prevent only the sale of new weapons and not take weapons from people who already own them. “However, many of the highly publicized mass shootings over the last few years have involved mass shooters who purchased their weapons just days before committing the crimes,” he stated.

GOP will take over House in about five weeks, and any new gun-control restrictions will be an uphill battle. Following the shootings in Virginia and Colorado, Representative James Comer (R-Ky) expressed doubt about the utility of new gun legislation. Considering that we already have several gun laws in place. I believe you would have overwhelming support in Congress if passing a bill would end gun violence,” Comer said in “Meet the Press.”

The congressman, who was one of only two-House GOP leaders to vote to ban assault weapons in July, indicated that other Republican members might be supportive of red-flag laws, depending on their wording. On “Fox News Sunday,” Fitzpatrick stated, “There are ways in which it can be drafted in such a manner as to preserve due process, defend law-abiding gun owners’ rights while enhancing community safety.” “We must analyze the situation,” he continued. Can you identify the gaps? What was the reason for the hole in the mental health system? Does HIPAA have anything to do with the reporting issue? Did the background check have a loophole, or is there a different explanation?

Although red-flag laws did not prevent the recent shootings in Virginia and Colorado, Murphy defended their passage, stating that these laws can take time for them to become effective. His remarks included praise for Biden’s signing into law this summer of the Bipartisan Safer Communities Act. Federal funding was intended to be increased for state “crisis intervention programs,” including red-flag laws. However, Murphy issued a somber warning with next month’s approaching 10th anniversary of the Sandy Hook Elementary School massacre.

He explained that a community that has gone through a mass shooting like this – Sandy Hook, Uvalde, and now Colorado Springs – will never be the same. However, there is some measure of peace in the fact that we have passed legislation that will contribute to at least a marginal reduction in the number of shootings in our country. Moreover, he pointed out that every holiday reminds such families of an epidemic unique to the country—the decision to allow this to continue lies within our hands.