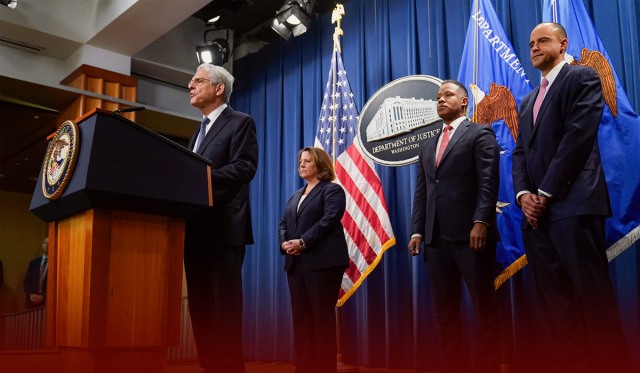 During a press conference on Friday afternoon, U.S. Attorney General Merrick Garland announced the appointment of Jack Smith as special counsel in two matters related to former President Donald Trump’s conduct. Currently, an investigation is underway to determine whether any individuals or entities acted unlawfully to interfere with the transfer of power following the last presidential election.

In a court case in which Elizabeth Holmes was convicted earlier this year of defrauding investors in her famous blood testing company, Theranos. She was sentenced Friday to 11.25 years in prison.#ElizabethHolmes #Elizabeth_Holmes #Theranos #TheranosTrial #ElizabethHolmesVerdict pic.twitter.com/G1LS11prBu

Second, the study examines whether Trump mishandled presidential records and classified documents after leaving office and whether he obstructed investigations into these records. Garland decided to appoint the special counsel based on Trump’s Tuesday announcement that he would run for the upcoming presidential elections and U.S. President Joe Biden’s intention to run for the same office.

Considering recent developments, including the former Republican president’s announcement to run for the next election & the current president’s intention to run, Garland said it is in the public interest to appoint a special prosecutor to conduct an independent investigation and prosecution. In addition, after he was defeated in the 2020 election, Trump made false claims about the election being “stolen,” adding fuel to conspiracy theories about the election’s legitimacy.

Trump supporters attempted to stop Congress from confirming Biden as president with these types of claims on January 6, which resulted in the deadly attack on the U.S. Capitol. The investigation continues to focus on Trump’s involvement in the attack and the events that led up to it. Garland emphasized throughout the news conference that the special prosecutor would decide whether to file criminal charges based on independent prosecutorial judgment.

Garland stated that the special counsel would also be able to prosecute federal crimes arising from these investigations. According to Al Jazeera reporter Rosiland Jordan, Garland’s decision was intended to avoid perceived conflicts of interest, as he distanced himself from the investigation and appointed a special counsel. Neither the Justice Department nor Joe Biden can be accused of tilting the scales in favor of or against Trump, as Jordan pointed out. The Justice Department is trying to ensure this work is completed, but there is no way to accuse it of doing so.

The press secretary for Biden told reporters earlier this week that he could not respond to the announcement made by Judge Garland and referred their questions to the Department of Justice. I need clarification: we were not provided with advance notice. Investigations into criminal activity are the responsibility of the Department of Justice. Jean-Pierre confirmed that he and his team were not involved in the incident.

On the other hand, the president has clarified that he will not be taking part in the special counsel’s investigation. The situation is not acceptable. I find it extremely unfair. The announcement of Garland was very political,” he told Fox News following the announcement. A “rigged deal” was also called by Trump about the appointment of the special counsel.

In his present position, Smith is the head of the Kosovo Special Chambers and Special Prosecutor’s Office in The Hague, Netherlands, where he is responsible for investigating war crime cases. Before joining the U.S. Department of Justice, he worked as the director of the Public Integrity Section from 2010 to 2015. Upon his return to the United States, Smith will assume responsibility for the investigation.

During Garland’s interview, Smith was described as “an impartial and determined prosecutor, one who leads teams with energy and focus in pursuit of the truth.” Further, Smith was cited as having led a team of 30 prosecutors responsible for prosecuting public corruption and election crimes when he previously worked for the U.S. Department of Justice.

This appointment will not have a detrimental effect on completing these investigations, given the work that has already been accomplished and Smith’s experience as a prosecutor. He added, “I understand that the men and women involved in these investigations conduct themselves according to the highest standards of professionalism. Their accomplishments make me prouder than words can express.”

Ultimately, the special counsel will be controlled by Garland, but Smith’s appointment may allow him to maintain some political distance, enhancing public confidence in both investigations. The investigations are expected to be handled by career prosecutors in conjunction with Smith. After suffering an injury to his knee in a biking accident, Smith recently underwent surgery. During the news conference, he was not present.

Among the raft of criminal and civil investigations conducted by the states and federal authorities against Trump is a civil lawsuit filed by the attorney general of New York accusing him and three of his adult children of fraud in connection with the family business in real estate. Since 2017, Smith has been appointed by the Justice Department as a special counsel to handle politically sensitive matters.

During the investigation, Mueller did not explicitly state whether Trump obstructed justice, which prompted then-Attorney General William Barr to conclude that there was no basis for making such a charge. As a result, John Durham was appointed as a special counsel by Attorney General William Barr to investigate the origins of the FBI’s investigation into Trump’s 2016 election campaign in 2019.

The DOJ has appointed a special counsel for the second time in five years to investigate Trump’s conduct. Robert Mueller, the former FBI director, appointed special counsel in 2017, documented communications between Trump’s 2016 presidential campaign and Russia but did not find sufficient evidence to pursue a criminal conspiracy charge against Trump or any of his associates.

During a court-approved search of Trump’s Mar-a-Lago home on August 8, FBI agents seized thousands of government records, including highly confidential ones. In addition, investigators are investigating whether Trump may have interfered with the investigation. To prevent investigations into the documents and keep some records out of the hands of investigators, the former president filed a civil lawsuit.

Additionally, there is the ongoing investigation into the failed attempt by Trump’s allies to overturn the election by submitting bogus ballots to the U.S. National Archives and preventing Congress from certifying Biden’s victory. According to subpoenas issued by prosecutors, attorneys are subpoenaing former White House attorneys and close advisors to Vice President Pence to testify in that case.