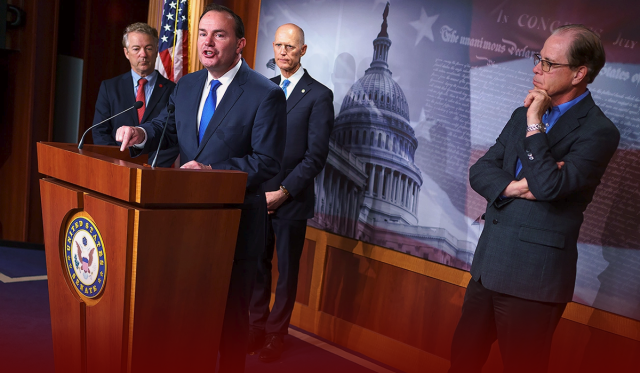 In the wake of the government funding standoff gripping Washington ahead of Friday’s deadline, congressional Republicans and Democratic White House officials are in a political deadlock. One of the last acts of Democratic political control of Washington would be the passage of an omnibus spending bill that would prevent the closure of the federal government. But, unfortunately, it has been delayed until the last minute due to routine differences between Republican and Democratic leaders over spending priorities, which are being exacerbated by conservative Republicans who wish to delay key decisions until the inauguration of the New Congress in January, when they hope to reduce spending with the new House majority.

With the House Republicans elected last month and the Senate Democrats retaining control, it is an early indication of the paralysis that could result from the divided government. In some cases, such as disputes over social programs funding and the need to increase the government’s borrowing limit next year, these clashes threaten to shut down the government, causing significant economic harm to the country. Moreover, with the election of Republicans taking control of Congress, the government shutdown threat has returned to the holiday season, a regular occurrence during the Obama administration.

A 35-day shutdown during the 2018-19 holiday season resulted from disagreements over funding for a border wall, which resulted in the furloughing of federal employees and disruption of critical services. Several Republican members of Congress, particularly in the House, view this as an opportunity to stop domestic spending on issues such as COVID-19, climate change, and other initiatives associated with President Biden’s administration. However, muscle-flexing GOP lawmakers are now seeking to use their new power, even though Democrats hold the majority in the House until the end of the lame-duck session following the election.

The Democratic Party, however, knows the government spending bill may be the last opportunity for them to enact some of Biden’s ambitious domestic plans before the next presidential election. Consequently, they may bypass the newly elected Republican House of Representatives in the fraught final weeks of 2022 by honoring Biden’s request for $37 billion in new Ukrainian aid, which some conservatives oppose and could be included in the government’s budget. Several Democratic leaders contend that the omnibus bill is urgently needed to fund police departments, reduce congestion at ports, improve health care for veterans, and enable the United States to compete with China.

Conservatives, however, argue that domestic non-defense expenditures have already contributed to the success of Biden’s Covid-19 rescue measures and his new healthcare and climate change legislation. There is a conflict between good governance and politics as the chance of an agreement hangs in the balance in the upcoming weeks. However, in a bitterly divided Washington, this conflict is usually resolved in favor of the latter force.

Republicans’ Grim Forecast for a Pact with Democrats

Last week, a group of Republican senators outlined their strategy for blocking a giant spending bill. Instead, it urged Mitch McConnell to agree to a short-term funding package to continue to open the government for a short time. It shows growing political pressure over the spending impasse, which shows that political pressure is increasing over the spending clash. “The Senate ramming through an ‘omnibus’ bill would utterly disempower the new Republican House from implementing our shared priorities if it funded the entire Pelosi-Schumer spending agenda throughout most of next year,” a letter signed by six senators, including Rand Paul, Ted Cruz, and Rick Scott, said.

According to McConnell, they don’t have agreements for just about anything, which explains why he predicted a grim future for a pact with Democrats on a big funding bill. They are running out of time, and we have yet to agree on how much we will spend. Research suggests that the passage of a long-term funding mechanism may provide a respite for House GOP leaders since a short-term funding agreement carries a high risk that a government shutdown will be one of the first acts of a new majority, a situation historically damaging politically to the party causing it.

Representative Kevin McCarthy, the House Minority Leader, is already under intense pressure from members of his party who are committed to making him a speaker. Considering his limited political influence, he has pressured Senate Republicans to prevent Biden from obtaining another spending package. Additionally, McConnell’s remarks offer insight into how the GOP House may complicate McConnell’s life as he attempts to manage his party in the Senate next year while also showing how he plans to handle a confrontation with the White House.

At the end of the House majority, Democrats are preparing for the battles that will ensue at the beginning of next year. The majority wants to pass a government funding bill before the majority ends. Suppose lawmakers disagree on a deal. In that case, they must either pass a short-term spending bill to continue the debate into the new Congress or a long-term continuing resolution, which extends current spending levels for an additional year. However, officials from the Biden administration expressed concern last week that even a one-year funding package would be detrimental to major programs.

Additionally, on Sunday, the independent Vermont senator who caucuses with Democrats suggested that Republicans were attempting to jam Democrats at this year’s end so they can start slashing social spending in the new Republican House. “The Republican party views this as an opportunity to hold the country hostage and demand many things that, under normal conditions, they would not be able to do,” Sanders said on CNN‘s “State of the Union.”

“Well, they have not held back when it comes to stating that they wish to cut Social Security, Medicare, and Medicaid,” Sanders told Dana Bash. A briefing on the Ukraine war was held on Capitol Hill last week by Secretary of State Antony Blinken and Defense Secretary Lloyd Austin. While Republicans were angered by both secretaries’ attempts to lobby for an omnibus bill over a continuing resolution, it demonstrates how time-consuming the government’s spending showdown has become.