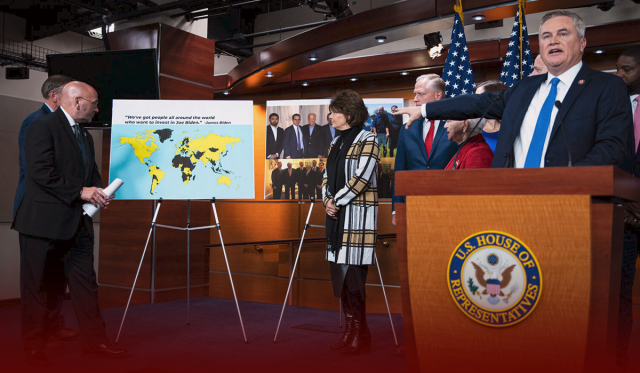 GOP leaders in the U.S. House of Representatives voted yesterday to launch a probe into President Joe Biden’s alleged weaponization of the federal government, a move that has been met with criticism from Democrats who view it as a partisan fishing expedition. With Republicans now in control of the majority, they had stated their intention to go after the US Justice Department, the FBI, and other federal agencies that had looked into the events of January 6th, 2021, when supporters of former President Donald Trump stormed the Capitol.

Republicans-controlled House of Representatives voted on Tuesday in favor of an investigation into what they refer to as the weaponization of the federal government by the Biden administration. Democrats characterized the investigation as politically motivated.#Biden #Republican pic.twitter.com/xjMQHL0FNJ

On Tuesday, Republicans voted along party lines to establish a new subcommittee named the “Select Subcommittee on the Weaponization of the Federal Government.” Its purpose is to comprehensively investigate President Joe Biden’s administration, which Republicans have accused of utilizing the FBI to target former President Donald Trump. The Republican Party also aims to investigate claims that President Joe Biden’s administration has coerced big tech companies to censor views that contradict White House policy.

The bill establishing the panel also stated that legislators would probe into how the executive branch works with nonprofit groups, the private sector, and other agencies in taking action against American citizens. “We can’t wait any longer,” declared James Comer, the Republican chairman of the Oversight Committee, in a speech on the House floor. “We must bring to light the misuse of power by the unelected federal bureaucracy that is not held accountable to the public.”

Investigations into Trump’s attempts to reverse his 2020 election defeat and his handling of classified materials have led authorities to focus on certain federal agencies. Trump has labeled these inquiries “witch hunts.” Republican Representative Elise Stefanik announced plans to conduct a probe into “Joe Biden and his administration’s utilization of the Department of Justice and FBI as political weapons” days after the classified material search at Trump’s Mar-a-Lago resort.

The provision in question, which authorizes the committee to examine criminal investigations in progress, has drawn criticism from Democratic lawmakers. According to Jerrold Nadler, the Judiciary Committee’s ranking Democrat, ‘this provision undermines the separation of powers doctrine and represents a dangerous development.’ Moreover, Stefanik stated, “the raid of President Trump’s Mar-a-Lago by the FBI represents a grave abuse of power and overreach of authority.”

The White House reported that on Monday, attorneys for President Biden located classified documents at a think tank in Washington D.C. that had ties to the President. Biden’s team stated they immediately handed over the documents once they discovered them, unlike Trump, who defies calls to return the documents and now faces an investigation into obstruction of justice. Certain Republicans have compared it to the criminal investigation of the removal of classified documents by former President Trump, even though fewer papers are involved in this discovery.

Oversight of a Federal Investigation

Legal specialists have noted that it is almost a certainty that federal law enforcement agencies will reject any effort by a congressional committee to gain access to documents related to active investigations. Scott Perry, a Republican member of the Judiciary Committee, whose phone was seized as part of the federal investigation of the efforts to overturn the 2020 election, is among those in consideration for a subcommittee seat. It would create a scenario where he could seek oversight of a federal investigation into his own actions.”