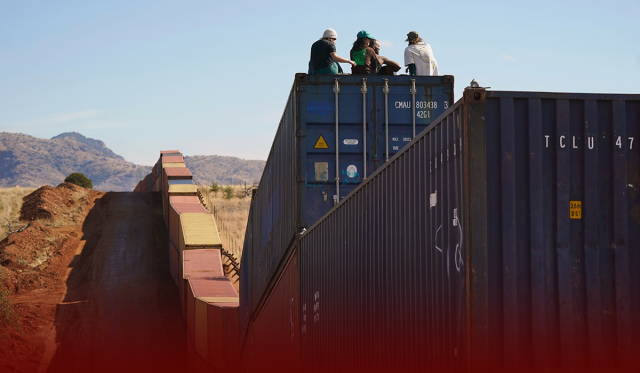 The Department of Justice claims that Gov. Doug Ducey (R) and state officials committed trespassing on federal property by building a shipping container wall along the state-Mexico border four months after he issued an executive order to erect it. After Ducey issued his executive order four months ago, the lawsuit was filed Wednesday. Along with Ducey, a suit is being brought against Clark, the Arizona Division of Emergency Management director, and Muehlenbeck.

The federal government filed a lawsuit against Arizona Governor Doug Ducey and the state on Wednesday over the placement of shipping containers at the border with Mexico as a border barrier. The US authorities assert that the containers are trespassing on federal lands.#Arizona pic.twitter.com/XAP3qn2xYR

In the lawsuit, Arizona is accused of damaging federal lands, threatening public safety, and impeding the performance of official duties by entering and occupying U.S. Bureau of Reclamation and US Forest Service lands without the required permits or authorizations. In addition, although Ducey has allegedly indicated that additional shipping containers will continue to be installed and construction workers from the state’s Department of Emergency & Military Affairs will be utilizing the state’s construction crews, officials from both agencies have previously notified the state that it is trespassing.

On October 21st, Ducey filed a lawsuit against United States Secretary of Agriculture Thomas Vilsack and officials of the two agencies in response to previous federal objections to the wall, claiming the wall was necessary for relieving a “crisis unprecedented” along Mexico’s border. Damages requested by the U.S. are equal to the amount required to remove the containers and a declaration that the state has violated the U.S. Constitution and federal law. According to the Associated Press, an estimated $95 million will be spent on the wall of 3,000 containers.

Sheriff David Hathway of Santa Cruz County told Fox 10 that the containers are being placed on federal land, which is part of a national forest. Additionally, the federal government has stated that this is an illegal activity since this is not state property, it is not private property, and it is not on private property. It is still being determined whether the shipping containers will be removed before Governor-elect Katie Hobbs begins her term in January. However, Hobbs indicated that the containers might be repurposed to provide affordable housing.

Several issues concerning the wall were discussed before the midterm election, in which Hobbs defeated Republican Kari Lake, who had defended the wall and was prepared to take the case to the Supreme Court. Moreover, officials in other states have also called for greater border security, such as Texas Governor Greg Abbott (R) busing migrants to New York City and Philadelphia as part of the decision to build the shipping container wall.

A bold display of border enforcement by GOP Governor Doug Ducey when he prepares to leave office involves the ongoing construction of hundreds of double-stacked shipping containers wrapped in razor wire along Arizona’s remote eastern border with Mexico. Ducey continues to implement the project despite objections from the U.S. government, ecologists, and the incoming governor. However, protests in recent days have slowed and halted much of the project.

Previously, Hobbs has suggested repurposing the containers to serve as affordable housing, which is becoming increasingly popular with the homeless and low-income residents. However, the federal government has informed Arizona that construction on U.S. soil is unlawful and ordered it to cease. Ducey filed a lawsuit on October 21st over the objections of federal officials, and the dispute was brought before the courts.

Groups advocating for the protection of natural water systems claim that the containers threaten species and natural water systems. “A great deal of damage may be caused here between now and early January,” explains Russ McSpadden, a Southwest conservation advocate, who has been visiting the site regularly since late October.

In his remarks, Governor Ducey asserted that Arizona possesses sole or joint jurisdiction over the 60-foot strip over which the containers rest and a constitutional right to guard citizens against imminent dangers from criminal and humanitarian crises. When Arizona sued the United States government, Ducey stated that Arizona would complete the task that Joe Biden refused to accomplish. It is not a game of backsliding for us.”

In addition, Ducey rejected the U.S. government’s claim that the containers prevented the government from conducting its official duties and completing some border infrastructure projects. Earlier this year, the Biden administration announced it would fill gaping holes in the wall. However, he reported that he was encouraged by the announcement. “It was not feasible for Arizona to ignore the crisis on its southern border and begin erecting a temporary fence,” the governor wrote.

Hobbs has expressed her concern about the project but has yet to decide what will be done after she takes office on January 5th. In his lawsuit on October 21st, Ducey asserted that Arizona has sole or shared jurisdiction over the 60-foot strip of land where the containers sit and that it has a constitutional right to protect its residents from “imminent dangers of criminal and humanitarian crisis.”

In Yuma, a popular crossing point in western Arizona, Ducey’s container wall was launched in late summer. Scores of asylum seekers arrived daily and often found ways to circumvent the new barriers. A 450-mile border wall built by Trump left open areas that were filled with containers. Migrants are not likely to be directed to the remote San Rafael Valley, where the latest construction is underway, in Trump’s plan.