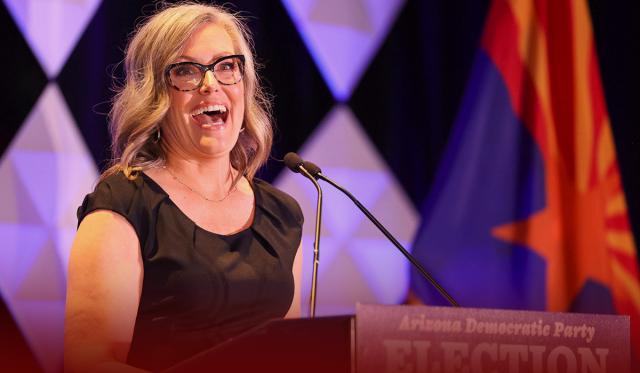 Arizona has gradually transitioned from a solid red state to a battlefield state in recent years. Governor-elect Katie Hobbs, the secretary of state, became the latest Democrat to win a statewide election. However, during Hobbs’ campaign, former local T.V. news anchor Kari Lake, a Republican, refused to accept her race results as she repeated former President Trump’s false claim that the 2020 Presidential Election had been rigged.

A major threat to voting rights is being avoided in Arizona with the victory of the Democratic candidate for governor, Katie Hobbs, over her far-right, Trump-endorsed opponent, Kari Lake.#ArizonaElections2022 #KatieHobbsWins #Democrats #arizonagovernor #Arizona #KariLakeLost pic.twitter.com/ZVcylOQzNB

Kari Lake, a former television anchor who denies the results of the 2020 election, was defeated by Hobbs. After Monday’s election results were announced, Lake refused to be drawn into the talks about whether she would accept defeat this time. However, she tweeted, “Arizonans know B.S. when they see it.” On Monday evening, the Associated Press predicted Hobbs to win the election with over 95% of votes reported.

Hobbs wrote, celebrating her victory, “Democracy is worth waiting for.” She also thanks Arizona for its trust in her. Hobbs became well known for his staunch defense of the legitimacy of the previous election and his warning that Lake would be a catalyst for chaos. The loss of Lake illustrates that Trump is weighing down his allies in a crucial battleground state as he prepares to announce his candidacy for the office of president in 2024.

Democracy is worth the wait.

I am so honored and so proud to be your next Governor. pic.twitter.com/O6ZFSHbIBe

Polls had virtually tied Lake and Hobbs, and Hobbs’ refusal to debate Lake and her lukewarm performance on television in the weeks preceding the election had worried her supporters. Nevertheless, in her role as Arizona’s top election official, Hobbs gained national support and recognition for defending Arizona’s results against a frenzy of disinformation and repeated efforts by Republicans to undermine and undermine Joe Biden’s victory in 2020, despite being threatened with death.

Hobbs has prevented further damage to Arizona’s election systems, which has been welcomed by voting rights advocates. Between 2021 and 2022, Republican legislators in the state introduced at least 81 bills to restrict access to the voting booth. Lake had vowed to dismantle further voting norms in Arizona if she won the election. She proposed declaring the winners on Election Night, a rare occurrence in Arizona, where mail-in votes can be delayed for days, and forgoing automated ballot counting in favor of hand counting, which is slower and less accurate.

Recently, right-wing activists have been operating aggressively in the state. The U.S. Justice Department (DOJ) and law enforcement were notified of several complaints of voter intimidation by Hobbs. In Phoenix, the election headquarters of Maricopa County was being photographed and intimidated by members of the conspiracy theorist group Clean Elections USA. Hobbs’ victory indicates that Copper State has begun to resemble a political battleground, once a conservative bastion.

Changing demographics and grassroots activism have contributed to amplifying the voices of young and Latino voters, who have been assisting Democratic candidates in gaining key victories. It represents a significant victory for the Democratic Party, which defied expectations that a “red wave” would sweep the Senate, despite GOP predictions for a majority in the House of Representatives. Many voters may have been motivated by abortion rights as well.

According to a recent poll, approximately 90% of Arizona voters oppose a total abortion ban. Hobbs made abortion a central issue of her campaign after Arizona reinstated its pre-statehood prohibition on abortion. She emphasized the impact such a ban would have on women and families. During her campaign, Lake supported a solidly conservative platform, which included a complete ban on abortions and a promise to declare an “invasion” at the southern border. She was a staunch supporter of Donald Trump and threatened only to accept the election outcome if she won.

Before entering politics, Hobbs worked as an active social worker with homeless youth and as a manager at a large domestic violence shelter in the Phoenix metropolitan area. A member of the state legislature since 2010, she has served three terms in the U.S. Senate and one term in the House of Representatives, rising to the position of minority leader during her tenure in the Senate. Hobbs won a narrow election as secretary of state in 2018 but soon found herself amid a political storm as Arizona became the focal point of President Trump’s efforts to reverse the results of the 2020 election.

She frequently defended the integrity of the voting process on cable television. By attracting attention, she was able to raise millions of dollars, as well as raise her profile, before she was able to win her primary with ease. By law, she cannot run again for governor, as Republican Doug Ducey was barred from doing so by term limits. The election of Ariz.’s first Democrat as governor had not taken place since 2006 when Janet Napolitano was elected.

Abolition access was one of Hobbs’ campaign priorities, as Arizona faced a complete ban on the procedure. During an interview with CBS’ “Face the Nation,” Hobbs stated that a woman should be left to make medical decisions and that politicians should remain out of the matter. It was one of the most closely watched contests in the country this election cycle, with results showing the two candidates neck and neck throughout the election campaign.