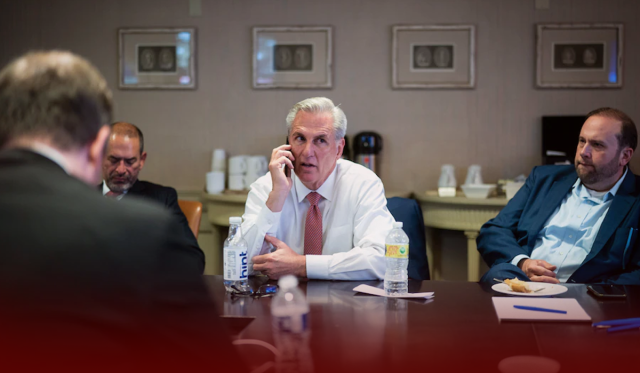 During the holiday weekend, House Republican leader Kevin McCarthy and his supporters made calls and met with members to secure McCarthy’s bid for speaker on Tuesday. While most Republicans support McCarthy’s (Calif.) election as speaker, a group of approximately fifteen has caused uncertainty about the outcome. On Tuesday’s floor vote, McCarthy could only afford to lose four Republican votes. The tight margin has allowed the conservative members of the House Freedom Caucus to negotiate and make demands in exchange for their votes.

As Republicans continue to argue over whether Kevin McCarthy is deserving of the top spot, McCarthy and his allies have been working to ensure his career goal of becoming a speaker on Tuesday by making phone calls and meeting with members over the holiday weekend.#KevinMcCarthy pic.twitter.com/NA4n7tn4cm

If McCarthy’s bid for the speakership fails in Tuesday’s first round of voting, it will be a significant and historic defeat – the first time a leader has lost the first-round vote in over 100 years. The Republican conference is currently uncertain, with many comparing the situation to “two trains speeding towards each other at 100 miles per hour, and everyone wondering which one will come out on top.” Five GOP leaders have consistently disagreed with McCarthy’s bid for speaker since the midterm elections.

One of these is Representative Andy Biggs of Arizona, who lost to McCarthy in a conference vote in November but will openly challenge him on the floor on Tuesday. On Monday evening, McCarthy met with influential lawmakers from various ideological viewpoints to discuss what to expect on Tuesday. However, no progress was made as the holdouts reiterated their opposition to his candidacy to reporters after the meeting. Despite McCarthy’s efforts to win over the holdouts through concessions such as changes to a term limit provision, nine additional GOPs added their names to the letter on Sunday, stating that McCarthy’s proposal was “insufficient,” further demonstrating that his bid for the speakership remains precarious.

The nine Republicans stated in their letter that “the times demand a radical departure from the status quo, not a continuation of past Republican failures.” In response, McCarthy assured his colleagues in a letter that he would “work with all members of our party to establish a conservative consensus” while also highlighting the need for the conference to come together behind a proposed rules package that would shape the House’s governance for the next two years. “It’s time for our new GOP majority to embrace these ambitious reforms and move forward as a united front,” McCarthy wrote. “I’m willing to be judged by my actions as Speaker rather than my words, starting on January 3 and every day thereafter.”

Despite the backlash, McCarthy remains determined to secure his election by any means necessary, including keeping some secret strategies up his sleeve. According to several lawmakers who wish to remain anonymous, McCarthy intends to stay on the floor for as long as possible to secure his victory on Tuesday. These lawmakers shared this information confidentially, as the election is still ongoing, and deliberations are private.

If McCarthy failed to secure the necessary 218 votes to become speaker, it could hinder his 16-year congressional career and the progress he has made towards this moment. However, he is known for his ability to trade favors in hopes of gaining trust; his quest could be for naught if he cannot overcome the demands of some who seek to weaken the power of the speakership.

In the short time since being elected to office in 2007, McCarthy had already achieved a leadership position by the time he saw the Freedom Caucus play a role at the end of Paul D. Ryan’s (Wis.) and John A. Boehner’s (Ohio) speakerships. Rather than attempting to exclude the Freedom Caucus from the mainstream Republican Party as Boehner and Ryan did, McCarthy chose to embrace the group, even after Representative Jim Jordan (Ohio) led the group in opposition to McCarthy becoming the top Republican in the chamber after Boehner’s departure in 2015.

According to GOP pollster and close friend of McCarthy, Frank Luntz, “Kevin is a very strong relationship guy. Unlike many congressional leaders who tend to become less receptive to others as they climb the ranks, McCarthy has been the exact opposite, and that’s been the key to his success.” By including the viewpoints of the Freedom Caucus in conference discussions and offering influential committee assignments to some of its members, McCarthy gained the trust of Jordan and other members of the group.

To maintain this commitment, McCarthy informed his colleagues that he would make sure his selections for key panels more accurately reflect the ideology of the conference and would also advocate for balanced representation on standing committees.”

To ensure the smooth functioning of the House, McCarthy has recently held numerous conference-wide discussions and brought together key lawmakers from all ideological groups to discuss relevant issues. These efforts have led up to voting on specific rules. McCarthy included their demands in the rules package to win over holdouts, such as measures to reduce spending. He also supported the establishment of a select committee, inspired by the 1975 Senate “Church committee” that investigated the government’s actions following the Watergate scandal to examine “the use of government as a weapon against our own citizens.”

However, the commitments made by McCarthy, formally documented or privately promised in recent months, have yet to sway the small group of Republicans against him. Unless McCarthy backs a seven-year balanced budget amendment, Representative Ralph Norman, one of the five GOP lawmakers who have pledged to vote against McCarthy, affirmed Monday that he would stick to his decision to oppose him. Miracles happen, so it’s possible that he could suddenly change his stance,” said Norman. “But I’m not sure that will happen now. My initial vote is no; unless something major occurs, I see that staying the same as time goes on.

The Freedom Caucus now includes more ardent allies of former President Donald Trump, who view McCarthy as part of the “establishment” problem. Others within the group have concerns that the House will continue to operate in a manner that strengthens leadership and weakens membership. Nonetheless, even Trump has endorsed McCarthy as his pick for speaker.