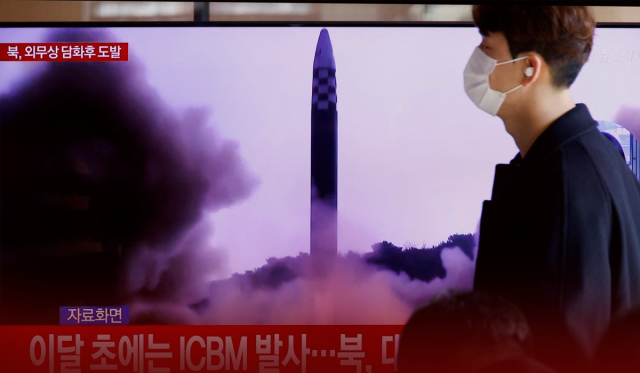 The North Korean government conducted a ballistic missile test on Thursday, threatening Washington with a “further military counteraction” to its increased defense relations with Japan and South Korea amid rising regional tensions. The Korean Central News Agency reported that North Korean Foreign Minister Choe Son Hui declared that the U.S. decision to increase extended deterrence was a gamble that it would regret in the long run.

A short-range ballistic missile was launched by North Korea Thursday toward the Eastern Sea, the South Korean military announced, hours after the North threatened to respond more forcefully to the US preparing to bolster its security commitments to the two allies.#NorthKorea pic.twitter.com/kcuAMe582t

The greater the defense presence of the United States in the region, the fiercer the military countermeasures from the North Koreans will be, in direct proportion to it,” Choe said. “The United States will be aware that they are participating in gambling, which they are sure to regret,” Choe added. A trilateral summit was held on Sunday between the United States, South Korea, and Japan during the ASEAN summit. President Joe Biden reaffirmed at the meeting that South Korea and Japan would be protected with full capabilities, including nuclear weapons.

North fired a short-range ballistic missile from Wonsan on Thursday morning at about 10:48 a.m. local time, according to the Joint Chiefs of Staff of the Korean Peninsula. A statement by the South Korean military stated that its surveillance had been strengthened and that the United States and South Korea were closely cooperating.

In a statement Thursday, Hirokazu Matsuno, the Chief Cabinet Secretary of Japan, said that Tokyo continues to gather and analyze information and closely monitors the military trends in North Korea. The latest missile test by North Korea marks the 33rd day that the country has conducted such a test this year. Both ballistic and cruise missiles are included in the tally. During 2020 and 2021, the country conducted only four tests.

Over the past few months, observers and the United States have expressed concern that North Korea is preparing to conduct an underground nuclear test. Satellite imagery shows activity at the nuclear test site. The hermit nation will launch a nuclear test in less than five years if such a test is conducted. Moreover, the JCS reported that the missile flew approximately 240 kilometers and reached an altitude of forty-seven kilometers, adding that a “pre-planned” missile defense drill had been conducted between the U.S. and South Korean militaries shortly before the launch.

During the East Asia Summit in Cambodia last week, the United States, South Korea, and Japanese leaders conducted trilateral discussions amid these tensions. Their commitment was to work together to strengthen deterrence. A joint statement issued by President Biden, Yoon Suk-yeol, and Fumio Kishida following the discussions expressed their displeasure with the number of ballistic missiles fired by North Korea and their commitment to strengthening trilateral links, both in security and other areas.

In addition, the U.S. government advised Pyongyang against conducting a seventh nuclear test. President Biden stated that the United States was prepared to use its entire range of capabilities, including nuclear weapons, to defend Seoul and Tokyo. In a statement issued Thursday, North Korea’s Foreign Minister Choe Son Hui stated that the trilateral summit was not a positive step but a step that would lead to “a more realistic and inevitable threat” posed to Pyongyang.

Choe said that the stronger the DPRK’s military response, the more enthusiastic the U.S. would be about invoking extended deterrence for its allies and the more provocative and bluffing the military activities would be. In her speech, she referred to her country by its initials, the Democratic People’s Republic of Korea. She stated that the United States knows it is gambling, something it will regret in the future.

Following the US-led drills, Choe argued that North Korean military activities are “legitimate and justified countermeasures” to those conducted by the United States. Due to the recent regional summit and the participation of Chinese Leader Xi Jinping after the last some years of self-imposed pandemic isolation, analysts said the signals coming from Pyongyang were significant. Regarding trade and allyship, China is the North’s principal partner.

On Thursday, the G-20 leaders concluded their summit in Indonesia, which was preceded by the launch of this initiative. Biden, South Korean President Yoon Suk Yeol, and Chinese President Xi Jinping raised the issue of North Korea during their bilateral meetings. Other problems, such as Russia’s aggression in Ukraine, overshadowed the summit, but Biden and Yeol raised North Korea in their bilateral meetings with Xi Jinping. In addition, the two leaders met with Japanese Prime Minister Fumio Kishida before traveling to Indonesia for the G-20 summit.

Yoon called on China to play an active, constructive role in tackling the North Korean nuclear threat in their bilateral discussions with Xi, whereas Biden noted that all members of the international community are interested in encouraging North Korea to act responsibly. Several sources of aid for North Korea, including China, the North’s last major ally and largest source of help, have been suspected of avoiding full enforcement of United Nations sanctions on the North and providing confidential assistance to North Korea to support its impoverished neighbor in maintaining its independence and maintaining its ability to resist U.S. influence.